When Your Pain Becomes a Seed for Your Purpose

I have a friend, Monica, who has this uncanny ability to see and serve people who are suffering. She is one of those people who, when she says she’s praying, you know it’s a promise. You know she’ll literally fall to her knees, praying circles over people in pain.

It’s becoming clear to me why Monica is so sensitive to the suffering of others. It’s because she has endured so much of it herself.

This could have gone, differently, of course. Monica could have grown bitter. She could have been so consumed with her own physical suffering — which is immense, I can assure you — that she became blinded to the pain of others. But instead of her pain becoming a blindfold, it became a magnifying glass. Monica sees the hurting, because she IS the hurting. I wonder often if her greatest pains are the seeds of her greatest purpose, the fuel for her most passionate prayers, the reason she reaches out to the rest of us in our own pain.

This is what Buechner calls the “stewardship of pain.” A person can feel pain so deeply, that she is automatically open to the pain of others. With an uncanny empathy, she can steward that pain as a way to bring healing to others.

What is your pain? It could be the seed of your greatest purpose, too.

Who else but a cancer survivor understands the terrain of the chemo journey? Who else but a recovering addict can better help an addict? If you’ve lost a child, gone bankrupt, went through a divorce … you are an expert in knowing what it takes to put one foot in front of the other.

The very thing that has caused you the most hurt in your life, … might be the thing God wants to repurpose in this life.

Today, Monica is recovering from yet another surgery. The road will be long. Her pain took her down, but it won’t take her out. I sense that — in time — this trial will only serve to sharpen her vision for those who are hurting.

The same possibility exists for each of us. Maybe it’s too much right now — maybe the suffering is too great. Take the time you need to get through this. But there will come a time when each of us will once again be able to see through the fog of our pain. And in that moment, perhaps we will see how our greatest pains could become the seeds of our greatest purposes. 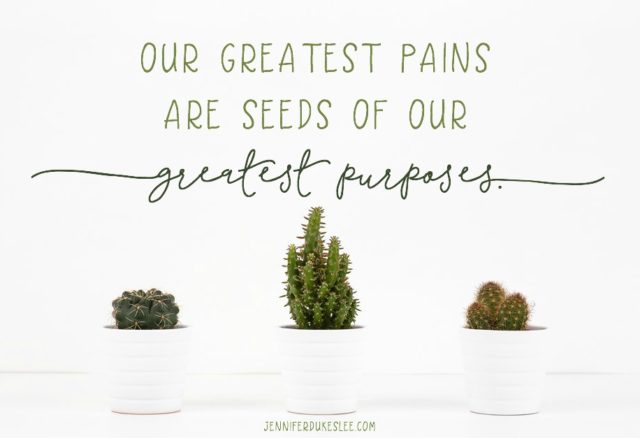 What pain in your life has become the seed of something beautiful?