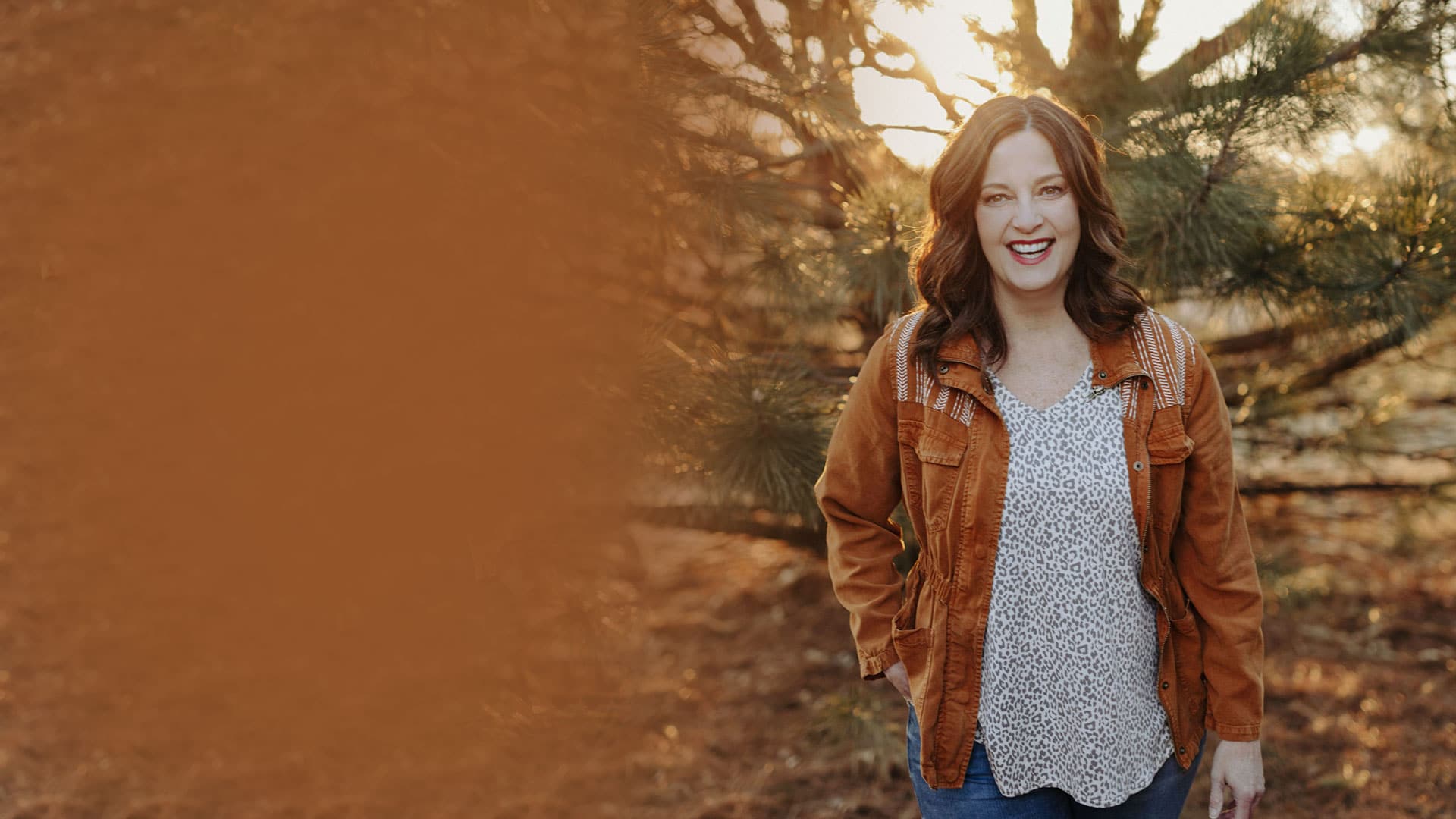 I write. I embarrass my kids. I love ’80s music, and I exercise mostly because I want to support my queso habit.  Jesus saved my life once upon a time, and then he kept doing it every single day since then. That’s why I am here: because of grace. I want to testify to his faithfulness and to make his great name known.

There you are! Pull a chair up to the table. I’d love to get to know you more.

Let me tell you a little about myself: I write books. I was once a mime. (True story). I attend a small country church where some Sundays you’ll find me spinning tunes as the church deejay. I’m a storyteller, and a grace dweller, daily saved by God’s amazing grace.

I’m a big fan of dark chocolate, emojis, eighties music, bright lipstick, and Netflix binges. My husband and I are raising crops, pigs, a herd of cats, and two beautiful humans on the Lee family farm in Iowa.

I am the author of the forthcoming book Growing Slow. My other books are It’s All Under Control, The Happiness Dare, and Love Idol.

I’m a journalist at heart. I used to cover crime, politics, and natural disasters as a news reporter for metropolitan daily newspapers. Now, I use my reporting skills to chase after the biggest story ever: the redemptive story of Christ. (That’s front-page news.)

I blog right here and offer lots of resources for you. All of this is aimed at bringing you hope and encouragement.

I cling to the hope of a cross, and I’m passionate about sharing the Good News through story. I believe in miracles; I am one. I marvel at God’s unrelenting grace for stumbling sinners like me, who have been made whole through Christ. I believe in scandalous grace, and that the cross is the most priceless and costly gift the world has ever seen. I believe that it really is all because of Jesus.

Along this journey, I love to tell the story. (‘Twill be my theme in glory!).

Most days, you’ll find me on Instagram and Facebook. And there’s always, always a spot at the table for you. I’d love it if you would consider subscribing by clicking here. It’s totally free, and I promise never to spam you because that would just be annoying. Along the journey, it’s a joy to walk with you. I’m so glad you’re here. 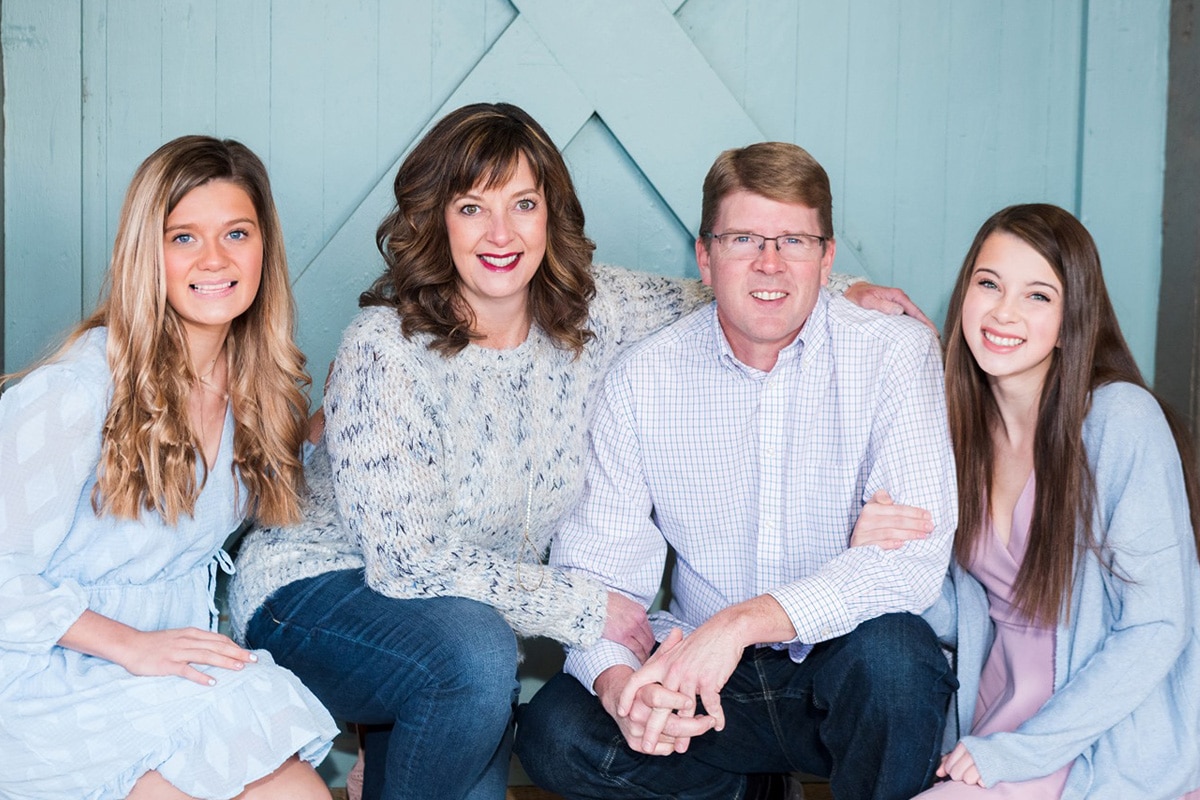 We clean up real good, don’t we? This was the first time in approximately forever that, all within the same hour, we were wearing something other than our usual costumes: farm coveralls for Scott; yoga pants for me (even though my pants have never been to yoga); a Jane Austen Pemberley T-shirt for Lydia; and athletic shorts for Anna.

Fun facts: All four of us are left-handed. We all like sushi. And Scott and I are slowly training our children to appreciate the art form known as ABBA.

Scott and I met at Iowa State University. He is a law school graduate, and I am a former political reporter. We had sights set on the big city. Weirdly, we ended up back where we started: in rural Iowa. Weird is the new wonderful.

I believe that being a Christian isn’t a thing we do only on Sundays, and that church isn’t something that just happens at the altar, and that grace abounds everywhere – sometimes where we least expect it.

I believe that even if people make fun of you – even if your own Christian community rolls its eyes at you – it’s still OK to be “on fire for Jesus,” to wear a Christian T-shirt, to call yourself a Jesus Freak and to raise your hands in church. And I also think it’s OK if you don’t.

I believe that every moment is an opportunity to spy grace, to offer love and to find a way to forgive. I believe all those things can happen anywhere: in funeral homes, in subway stations and in the sandbox at the park right after a mean kid throws sand in your toddler’s eye.

I also believe this: I am saved but still a sinner.

I believe in scandalous grace, and that the cross is the most priceless and costly gift the world has ever seen. I believe that it really is all because of Jesus.

I believe that Christ Jesus is more than a wise teacher, a fine philosopher or a miracle worker. I believe that He is God, the living Word, who became flesh. I believe He voluntarily atoned for my sin by dying on the cross. I believe He rose from the dead, ascended into Heaven and is seated at the right hand of God the Father.

I believe the Holy Spirit is a divine Person.

I believe that salvation is a work of God’s free grace and is not the result of human works, “being good” or taking part in religious ceremonies.

I believe that God exists, yes … And I also know that He does. I talked to Him a few moments ago.

I believe in miracles; I am one.

I’m a mess. And because of that, I believe I will always need forgiveness, until the last light of this life fades.

I believe that Jesus Christ is coming again.

And I believe that this is not the end,
and that there is hope for all people,
and that Love came to rescue the weak and
the broken and
the helpless and …
me.

And I — sinner falling now at His feet — believe that I will live with Him forever. 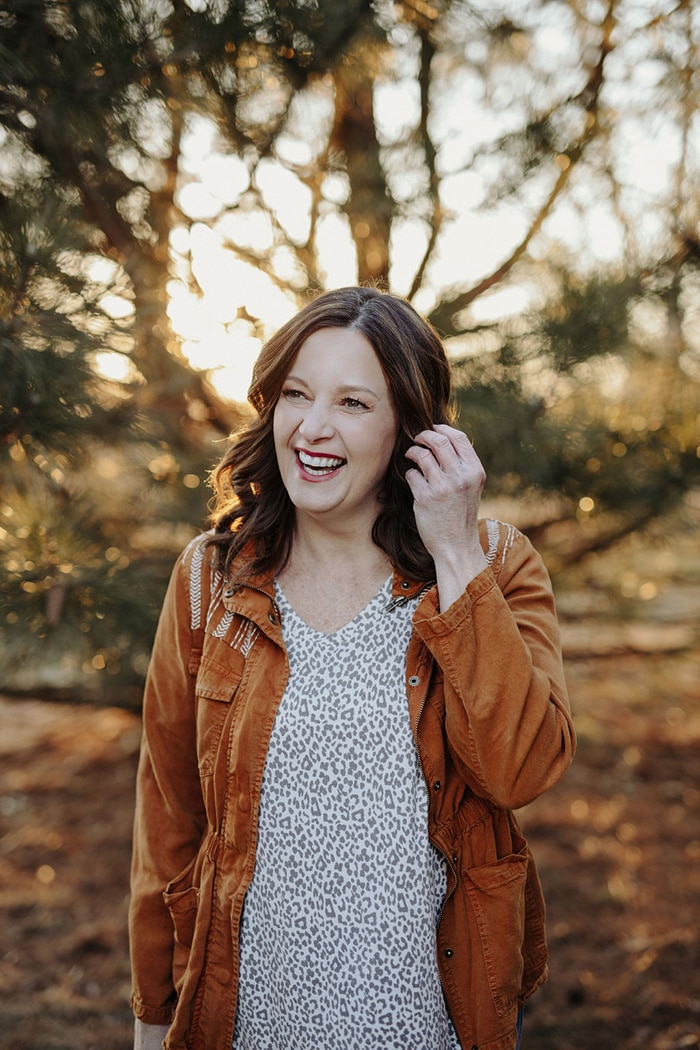