Jesus at My Front Door 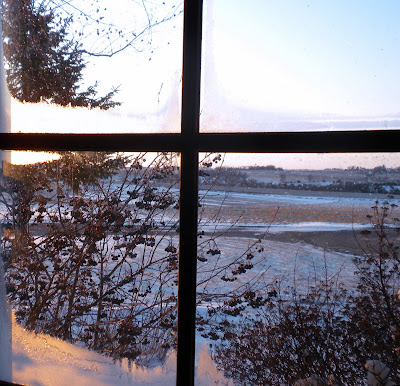 He showed up unexpectedly on our front doorstep last night, just before supper.

Scott opened the door, and a man stepped in, stamping his feet on the rug. I was in the basement, but could hear the stomping and the voices, and I could feel the zero-degree night rushing in with our visitor.

“I need to give this to Jennifer,” the man said, and I recognized his voice.

He sounded urgent. Was everything OK? I took the steps two a time to see. This bundled visitor and my husband were standing on the front rug, and he unfolded a yellow slip of paper.

On the paper were 28 names. He showed me the list, and pointed with a gloved finger. My name was among the 28.

He handed me a gift card and read from the yellow paper. He told me I had to take the gift card to Dordt College, the college where I teach journalism. Still reading, he added: “You’re supposed to give this to someone and tell the person, ‘God cares for you, and so do I.'”

He looked up from his paper, and I stumbled over words.

He answered and shook his head: “I don’t know who. I just know that you’re supposed to give it to someone at Dordt.”

And the name came right away, in that Spirit voice that can’t be heard audibly but booms within the soul. I knew.

And he nodded. He knew what it meant for the names to come right away, because he’d heard names, too. That’s why he had come to this country door, stepping over high snow-drifts to ring the bell.

He knew that it was more blessed to give than to receive, but he didn’t want those who received to know who the giver was. So he was stopping at the doorsteps of 28 people, on a blustery December night, to recruit his army of Christmas helpers.

I asked if I could look at his list. At the top were dollar amounts, scratched out.

“I finally put my hands over my ears like this,” the man said, laughing and demonstrating. “And I went: ‘La-la-la-la-la! I’m not listening any more, or I’m going to go broke, God!'”

This is a middle-class Iowa guy who works at a factory, drives a used car and isn’t afraid to wear second-hand jeans or WalMart shirts. He’s a dad and a husband and has built up a little bit of savings. He is not an affluent man, but he loves Jesus, and that makes him one of the richest men I know.

“Maybe we could have gotten a new TV with it, but this is what I’m supposed to do,” he shrugged. “It’s a gift from God. You can’t tell anyone who did it, because this is from God — not me.”

And now, he needed elves to spread Jesus’ love this Christmas. Each person on his list — 28 in all — will receive a $25 gift card to Applebee’s. Each of us has been instructed by this man to give it to someone else.

I’m supposed to give to someone at Dordt, he told me.

A neighbor-boy down the road is supposed to give a card to someone at school.

Another neighbor, in her 60s, will find someone in need in a nearby town.

A beer-truck driver on the list will give to someone on his route.

A man who sells cigarettes and Doritos at area convenience stores has a card to give, too. So does a stay-at-home mom, a teenage girl, a schoolteacher, a coach, a farmer, a nurse, a grandpa, a local business owner.

I read down the list and just shook my head and began to cry. This is the multiplication of giving: One + one + one + one.

And we — this little army of deliverers — we get to take part in this wild act of giving, this extravagant generosity of an anonymous man who won’t even get to witness the blessing.

So extravagant, this grace of our Father, who sent His son to Earth. So gracious, this Father, to speak to mere mortals and let us be His hands and feet to a weary and broken world. Who are you, Lord, that you are mindful of us? I’m buckled at the knees by your extravagance. Your giving, Lord, is contagious. We want to give wildly for you, too. Show us how today.

Each Wednesday I join Ann Voskamp as she explores spiritual practices that draw us nearer to the heart of Jesus. This week, Ann asks us to explore — “Finding Christ in Christmas: Where I’ve seen Jesus this Season…”

I saw Jesus on my doorstep last night.

Photo: Looking out the front window, our cold world is framed by the cross.
And it’s warm … so warm … on this side of the cross.