He Opened the Floodgates 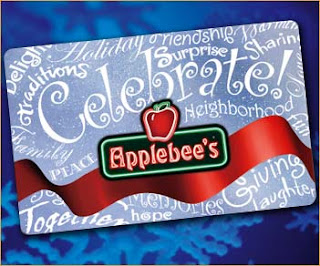 Only once time in all of the Bible — just once — God commands us to test him. “Test me in this,” says the LORD Almighty, “and see if I will not throw open the floodgates of heaven and pour out so much blessing that you will not have room enough for it.” — Malachi 3:10

Give wildly, God says, and then brace yourself: For grace will come a-gushing! And boy, has it ever.

Today, I’m woozy from the floodwater of grace flowing down. One man’s giving has set a tidal wave of generosity in motion.

A few days ago, I blogged about a

man at my doorstep, anonymously giving away Applebee’s gift certificates. The man — of middle-class means — had spent $700 on gift cards so he could spread Jesus’ joy throughout northwest Iowa this Christmas season.

But he didn’t want anyone who received a card to know he was the one who’d given it. So God had given him the names of 28 “elves” to help him give away the cards. I was one of the assigned givers. You can read more about it by clicking

But it doesn’t stop here at the doorsteps of elves. Because giving like this is contagious.

One man’s act — his obedient response to the voice of God — is spreading across northwest Iowa in a furiously beautiful flood of grace.

Among the stories are these:

* One of the elves added $100 in other gift cards when delivering the Applebee’s card to a person in need.

* Another man — not one of the original elves — read about the story and has decided to give his children hundreds of dollars this Christmas to give away to people in need.

* Another elf sent a text message this morning, saying: “Our night janitor is an older lady, and she said her day was terrible when I asked. … So I went and got the card and told her ‘God loves you and so do I.’ She got teary and said it made her day.”

* This morning, the same anonymous giver who showed up at my doorstep stopped by the home of Chris over at Experiencing Grace & Peace. Chris tells his story over at his blog in a post entitled:

Jesus in a Ballcap.

* And this … this one leaves me breathless. I received this email today from a woman who works with the man who started this chain of giving.

“He gave my husband and me a gift card to give to someone else also. We usually sit at the same table at lunch every day. I can’t get his voice outa my head! He sat down to have lunch with us on Tuesday and said, “You are not going to believe what I have to do!”

Then he told us that God gave him the names of all of these people that were to get the Applebee’s gift cards. I bet he thought we were going to make fun of him. As he walked away from the table he turned around and said, “You all probably think I am nuts!”

The first thing that came to my mind and out of my mouth was….”Everyone thought Noah was nuts too!”

One of the receivers of a gift card was a man at work who works with my husband. He is the kind of person who makes fun of Christianity and has a very bad mouth. My husband listens to KNWC (a Christian radio station) as often as he can at work.

This guy thought it was all a joke. He was positive that no body would just give him a gift!

I think that the man that got the card is finally starting to understand this Christianity thing. He talked to my husband today about he and his wife going to a church service with us.

God does have a way of showing us how he is working to keep spreading the news that he was born and died for our salvation! And that His gift to us is FREE! All we have to do is let Him work in our hearts.”