My husband and I walked into a church yesterday morning in Nashville as strangers. We had arrived awkwardly early, bumping into the people trying to leave the building after the first service ended.

I smoothed the front of my dress, wrinkled from five days in a suitcase. I tucked a stray hair behind my ear. If you were there, we were the ones who looked like reanimated corpses from The Walking Dead. We’d been awake quite a while, due to the construction crew that decided to use jackhammers outside our hotel-room window at dark o’thirty. We needed coffee and Jesus, in equal proportions and with extra caffeine, thank-you-very-much. My husband found a tall, aluminum coffee server along the back wall. He pulled back the spigot. It was empty.

“Hey, let me help you with that!” came a voice from behind us.

The man thrust out a hand. “Hi, I’m Zach.” His shirt had two words screenprinted on the front: “Everyone’s welcome.” (Apparently even the zombies.)

He shook our hands, and then disappeared for half a minute. He returned with a fresh pot of coffee, and poured us two cups.

He asked us where we were from (a farm in Iowa), what we were doing in Nashville (I had spoken at a conference), and what had drawn us to this church (we had heard about the church from others who attended).

Soon, he was giving us a tour of the place – showing us the kids-ministry area, the church’s recording studio, a few of the offices.

It begins by stopping everything we’re doing to let someone know they’re worth it.

And that’s what Zach was doing for us.

It all started with a cup of coffee and a little bit of conversation. In a simple gesture, we shifted from “strangers” to “seen.”

Look, we would have been just fine with quietly making our way to our seats in the auditorium. We wouldn’t have felt shunned or annoyed. People are busy.

But imagine if we were that couple who had never stepped into a church before. Or imagine that we were a couple whose marriage was hanging on by a thread. What if we were broke. What if we had just experienced great loss.

And then some guy comes along with a shirt that says, “Everyone’s welcome,” and lets you know it’s for real.

Imagine if our first encounter with Jesus, was meeting a guy like Zach.

I didn’t know Zach before. I’d never heard of him. I don’t know his story. I don’t knew if he was the kid left out at recess and vowed to be different, or if he had a mother who passed on some kind of hospitality-on-overdrive gene. All I know is that at some point in his life, he decided it was right to really see people.

Toward the end of our tour, we walked past a wall full of value statements, written up by some of the employees of the church. Someone wrote this:

“I refuse to let one person go unnoticed.” 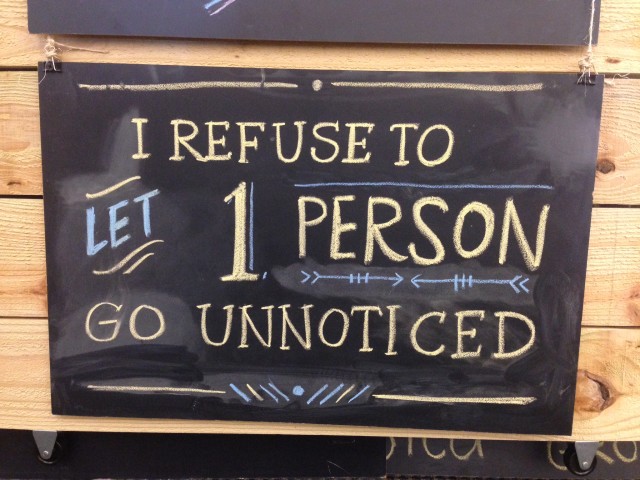 I snapped a picture. Seeing people, it seemed, had become an ingrained part of the culture at Cross Point Church.

What if those words became ingrained in all of us?

I know we can’t be all things to all people, but together we can offer a lot of love to a lot of people. What if we began to create a culture in our families and our churches and our communities, where there was always a seat open at the table? I wonder what a difference we’d make in our world.

Two days earlier, my husband and I sat at a table with several young women recovering from eating disorders. (I had shared my message of approval idols at an eating-disorder conference in nearby Franklin, TN). There are a lot of reasons why people struggle with disordered eating, but there seemed to be a common demoninator among the women we talked to. They had missed something important when they were younger. They had felt unseen, unnoticed and unloved.

1 – Everybody else is more lovable.

When we go first, and let others know they’ve been seen, our actions speak this message: 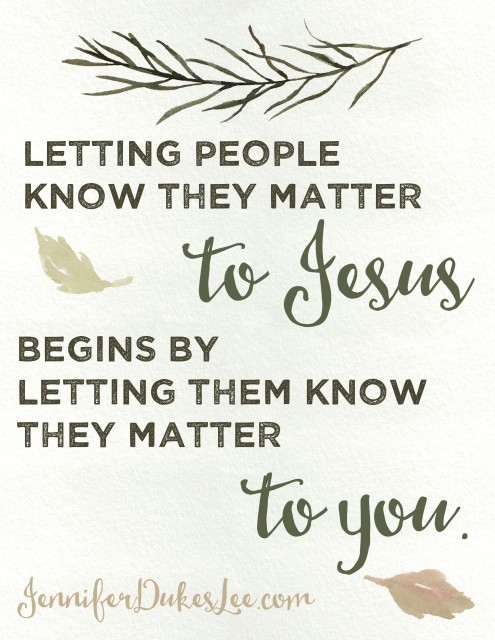 That’s what Jesus did. Jesus refused to let one person go unnoticed. He went after the one.

“Suppose one of you had a hundred sheep and lost one. Wouldn’t you leave the ninety-nine in the wilderness and go after the lost one until you found it? When found, you can be sure you would put it across your shoulders, rejoicing, and when you got home call in your friends and neighbors, saying, ‘Celebrate with me! I’ve found my lost sheep!’” (Luke 15:4-6)

I did a little research on Cross Point Church after we got home.

The church’s motto is this:

Turns out, Cross Point Church is one of the fastest-growing churches in America. I suspect that a lot of that has to do with some great programming, stirring worship, and solid preaching from the lead pastors.

But no one will hear the Good News unless they first felt welcomed enough to take a seat.

My husband and I left church Sunday morning feeling lighter than when we came. We heard a great message, and were inspired to live life a little differently than we did before.

But the Gospel message started an hour before the preacher took the microphone. It happened at the front doors of a church, when some dude in a T-shirt met two strangers at the door, because he refused to let them go unnoticed.