The prisoners hunch over plastic dining trays. They’re waiting for me to take the first bite. Even now, looking back, I don’t know if they were practicing good etiquette, during this rare opportunity to dine with a woman. Or maybe they were waiting because they wanted to see if I’d actually eat what was on my tray. I’m still not sure.

I use a plastic “spork” to slice through spongy, lukewarm meat I can’t identify. I smile, a weak smile with a closed mouth. I had picked Mystery Meat for my first bite, rather than the three sickly-pale peaches wading in a syrup pool. I second-guess my choice, but there’s no turning back now.

I chew deliberately. My mother used to call this “eating with long teeth.” I watch them watching me. Maybe my teeth are growing longer, like fangs.

A deep voice breaks the awkward quiet: “Ain’t quite like yer home-cookin’, is it?” The other men howl with laughter now, pick up their sporks. And in the echoing din of the state-prison gymnasium, I laugh, too, hearty and long.

And then I raise my spork, using it like a pointer, because I want him to hear this. I just want him to know this one thing: “I didn’t come for the food. I came for this,” and I wave my spork around a room filled with prisoners in blue jeans and gray sweatshirts.

The man to my right pats my back, says he’s glad I’m here — to dine with thugs and thieves.

And I think: Aren’t we all criminals?

I take another bite, tell him I’m no different from him. Not really. I’m the criminal on the cross, deserving of punishment but watching my sinless Savior die.

“You know what that man on the cross said? ‘Jesus, remember me when you come into your Kingdom,'” I recall the words in the Gospel of Luke. “I need a Savior, too, just like you.”

The only thing separating me and my dinner host is this: the razor-wire.

We’ve all been given a pardon to a death sentence.

Between mouthfuls, the man — barely a man, really — tells me about his mama, and how she used drugs most her life. How she’d had many men. And he tells me how he had been stealing and drinking and smoking since he was in elementary.

He pulls photographs from the front pages of his Bible. He wants me to see who matters most. He shows me two little girls in puffy dresses. He sees them once a month in the prison visiting room. They’re his, but they don’t know their Daddy, not really anyhow.

And at my left, another boy-man wants to show me the handwritten letter from his girl back home. He’s half-scared she’ll leave him for someone else before he gets out. He’ll be out in a year, maybe sooner, but who knows?

He says he was baptized earlier this day, and he has tears in his eyes when he tells me about it. He asks for my peaches, and I scoop them onto his plate. I wonder if he’ll stand up to the bullying in the prison yard when they call him a Jesus Freak. I wonder what he’ll do when his cellmates mock him.

Will he follow Jesus in the days ahead? Or will he fall?

But I can’t ask him those questions, without asking them of myself. Wretch that I am, I stumble, too.

I sip water from a cream-colored cup, share stories with my hosts. They really are the most hospitable, gracious hosts. I memorize their faces and their scruffy beards and their names, and the way tears rolls down the cheeks of burly men when they talk about the redemptive work of Christ.

Some say I should be scared here, dining with criminals in a room that wears the fragrance of a prison weight room.

But fear subsides when you gather around a table. The jitters ebb.

In “The Spirit of Food,” Stephen and Karen Baldwin write that tables do that: make us feel secure. Every meal is a still life, they write, and God is at work when we pull up a chair to a feast — no matter how simple.

And maybe even this meal
with prisoners and
unidentified meat
is art?

“… our hospitality is a medium of grace that opens hearts to deeper things. It is a simple way of loving,” the Baldwins write.

One of the men — a black fellow, a bald tenor with a big belly — stands to sing opera. The prison gymnasium echoes with words of a Negro spiritual. And I cry.

I think about the Wedding Supper of the Lamb.

The first words I ever wrote in my Bible were these: “We’re all just a bunch of hungry beggars who want to know where the Feast is.”

We’ll gather at that Feast, these men and I — all hungry, all undeserving even of the table scraps.

The tenor closes his eyes, lifts his silken vibrato to fill the room — a voice that people used to pay to hear. I close my eyes, too. His voice transports me.

Behind closed eyes, I catch a rare glimpse of the banqueting table, a foretaste of the feast to come. If we could just cut away the ceiling and lift the roof off this place, we’d be there. I can almost see it.

Oh, sinner you oughta been there
Yes my Lord
A-sittin’ in the Kingdom
To hear ol’ Jordan roll

“The table fellowship is a foretaste of full redemption when Christ’s finished work culminates in the wedding feast of the Lamb, at which we will sit and enjoy the finest of friends, good aged wine, and the best of foods.”

— Stephen and Karen Baldwin, in “The Spirit of Food” 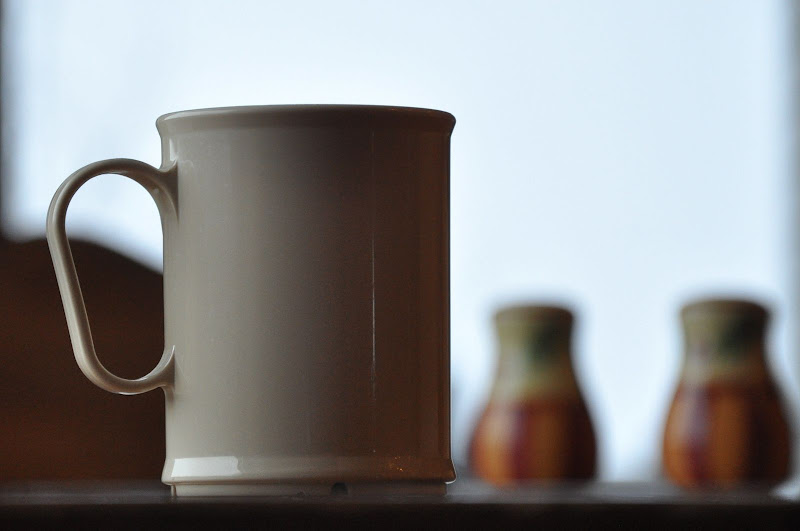 Submitted as part of The High Calling’s “The Spirit of Food” book club discussion.

Photo: Prison-issue cup, which we were allowed to bring home.