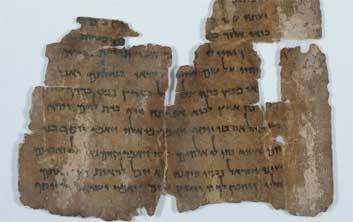 We drive north a few hundred miles for a final farewell to summer. We cram days with outlet malls and fast-food. We test stomachs on rollercoasters and waterslides and a wave pool where manmade breakers lift us — all giddy — off our feet.
But we save a day for this. Just. This. Words.
I lean against the wall in the museum lobby, waiting for the exhibit doors to open. The sign overhead reads: “The Dead Sea Scrolls: Words that Changed the World.”

I hold museum audio-tour players up to my daughters’ ears, and they strain to understand what the narrator says. Something about Bedouin shepherds and Qumran caves and fragments of scrolls that we would see once the big doors eased open.

I’m sure they’d rather be back at the hotel pool, cannonballing, but they’re here for their mama. They know what this means to me.

I lean my head back, close eyes, and think about all those years when I didn’t believe a word of the Word.

Now, I can’t survive without it.

The doors swing open wide their welcome, and before I step across the threshold, I read the sign again, the one about words changing the world.

And I think about words changing me, too.

Room after hushed room, the story of the Dead Sea Scrolls unfolds slowly behind glass displays. There’s so much, and I can hardly take it in, and we haven’t even seen the scrolls yet. It’s the pottery shards and the bits of ancient

phylacteries, and the science of words, long preserved. And I wish I’d brought a notebook, because I know I won’t remember it all, and I just want to get to the room where the real food is — the holy words on fragments of animal skin — but I can’t get enough of the archaeological appetizers either.

The audio-tour guide tells about the paleographic evidence and the carbon-14 dating and a young shepherd searching for a stray goat in the Judean Desert. The guide says the shepherd accidentally stumbled upon jars filled with ancient scrolls. And I laugh out loud in a quiet room at the likelihood of this great and holy “accident.”

Signs mark the exhibits with dates like 75 BCE — Before Common Era. That’s a scientist’s way of describing what we’ve traditionally come to know as B.C., Before Christ.

I peer through glass at the soles of a 2,000-year-old pair of sandals. I wonder about the feet that wore them, padding through caves to hide words in clay jars.

And I want to hide words, too.

And I stand there frozen, taking it in. This I know: no matter what the scientists say, all of life comes down to BC and AD. All of life is defined by who we were BC — Before Christ came — and who we are becoming Anno Domini.

I need my faith to make full sense of all this science propped on easels and spread under glass.

And the eight-year-old girl understands it, too. She tugs on my pant leg and whispers her revelation.

“Mommy,” she says. “God made that goat go in that cave so the shepherd would find the scrolls.”

And I nod my enthusiastic yes. For I’m sure of it, too.

I wait now, outside the room that holds the five fragments. Just five of the 100,000 they uncovered from the caves are here in a Minnesota gallery. I turn the silver band on my right ring-finger to find the LORD’s name etched in Hebrew. I know it looks like this:

I want to see those four letters, all lined up in black ink on yellowed parchment. That’s all. Just the Lord’s name. I won’t be able to read any of the rest of it, written in Hebrew and Aramaic. I just want to see the name of Yahweh.

I shuffle along the wall, into a dimly-lit room with five glass cases.

I devour words I cannot read, looking for the name of the Lord. I hunch over display cases, hungry. Yet I cannot find His name.

God, I’ve come all this way. I cry on the inside a selfish prayer.

The fragments are smaller than I thought they’d be. They’re torn and fuzzy behind thick, dark glass.

I press nose to glass and leave fogs of desperate breath on one case after another.

I hover over the final display, tracing lines and parchments with squinting eyes. I plead once more. Is it too much to ask, Father?

I’m begging now, hunched over top of one of the oldest Bible texts known to man, and all I can see are undecipherable words and my own reflection.

And that’s when I see it: Not the name of Yahweh, but simple me.

In ancient words, I find myself.

And wasn’t that always the point? That in the very search for God, we would discover our true selves not for the sake of self, but for the sake of Christ? That we would search the Scriptures to find God, and realize He’s been there all the time?

I look at the woman in the reflection and realize, that in the midst of this fallen state of humanity, He calls me Redeemed, and calls me to be His image-bearer, a reflection of Him.

These words that changed the world?
They’re changing the woman, too.

I saw her in the reflection.

Photo: A fragment of the Dead Sea Scrolls. Courtesy of Israel Antiquities Authority.