← Previous Next →
The place God calls you to is the place where your deep gladness
and the world’s deep hunger meet.
— Frederick Buechner
Last fall, my mother-in-law called me into her kitchen to show me that she’d found the answer she’d been searching for. She spread out the newspaper on her kitchen table, and pointed to photographs of people wearing aprons and hairnets as they filled plastic bags with soy, rice and dried vegetables. They were packing food for the hungry.

“This is it,” she said, and I could hear gladness in the voice of the widow. “We should do this. We can do this for Paul.”

For months, she’d wondered: How do you honor a man you love after he’s gone Home? How do you celebrate the life of a farmer who gave much, humbly and quietly?

She found her answer in that news story: You honor a giver by doing what the giver did.

So she made the calls and wrote the check and invited family and close friends to join her in a food-packing party. Side by side, wrapped in hairnets and aprons and laughter and memories, we’d honor a farmer who fed people.

She made that decision last November, in the midst of an Iowa harvest. Outside, her son (my husband) gleaned fields in this … the first harvest without his father.

Yes, Joyce said, we could go to Sioux Falls to pack food for the people of Haiti. She’d buy the food, and we could help her pack it.

Two farm wives looked at the pictures in the newspaper and we knew. “It’s perfect, Joyce,” I said. “Just perfect.”

So last November, the folks at

Kids Against Hunger penciled us into the appointment book. We’d pack food on the one-year anniversary of Paul’s exit Home.

And then Haiti shook, and

we shook, too. A spiritual earthquake rattled our souls. Yes, Joyce, this would be a perfect way to honor Paul.

Like Paul, the farmer, we would feed people to honor him.

At sundown on January 21, 2010 — exactly one year after we escorted Paul home at the side of a hospice bed — our deep gladness in Christ met up with the deep hunger of our fellow man. 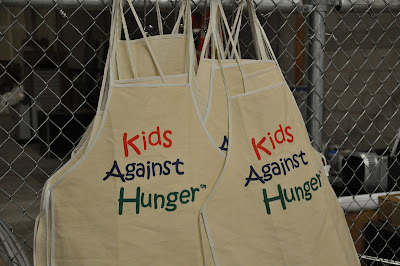 For two hours, we made packets of specially formulated rice-soy.
The food packages have been developed by some of the world’s
leading food scientists
at Cargill, Pillsbury, General Mills and ADM. 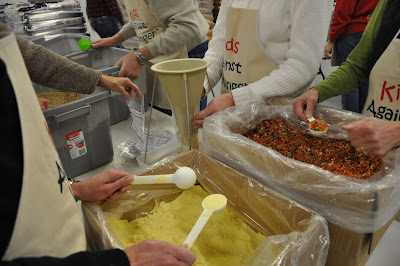 “If you think you are too small to make a difference,
try spending the night in a close room with a mosquito.”
— African Saying
(-smile-)

Wee ones, not the least-bit “too small” to make a difference. 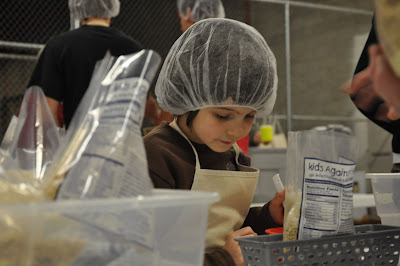 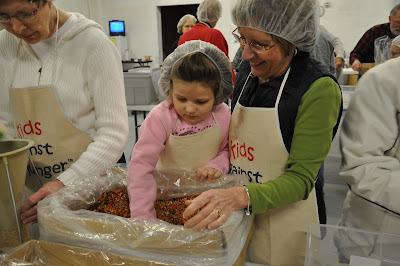 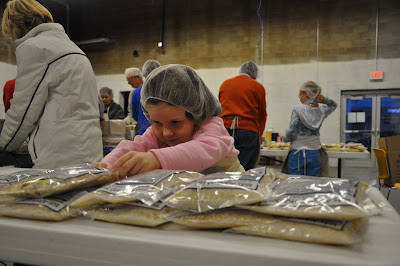 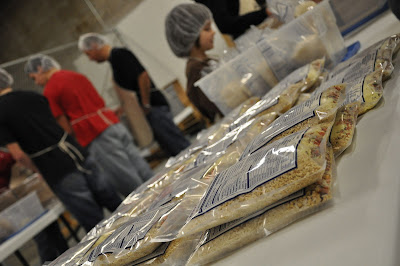 My favorite farmer’s hands, dipping a cup into soy. (We are a soy-producing family. On our farm, we grow corn and soybeans.
We also produce an edible soy-snack called Super Soynuts.) 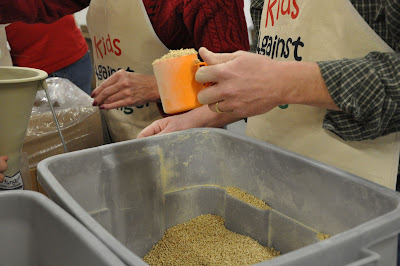 Kids Against Hunger sends food all around the world —
and right here to starving people in America– but their focus now is Haiti.
Our girls draw hearts and smiley-faces on the boxes. 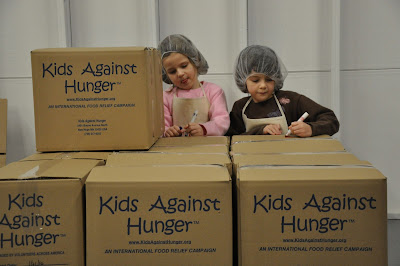 A photo of a photo ….
Children with a plate full of food packaged by Kids Against Hunger. 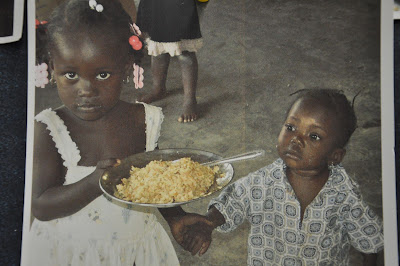 Paul,
We packed these in your honor,
and in the name of Jesus Christ
with whom you celebrated your first Heavenly birthday
on January 21, 2010.
We did what the giver did
and what the Giver does.
We gave. In all, we packaged more than 7,500 meals for hungry people.