When the Storms Rage On

All around us, the storms rage on.

Basements are filling, and strength is emptying. Fields are flooding, and the sky keeps flashing. Indoors, lights are flickering.

A whole town is in shambles in Pilger, Nebraska, somewhere out west of us.

Levees aren’t holding, and people are barely holding on.

Outside, the rain is tapping against my windows, as I tap on these keys.

I remember, again, what an old pastor once told me:

Sometimes, the only way out of any storm is to go through it. I fumbled for my glasses. Slipped on blue jeans and tennis shoes. I kissed my husband goodbye, and grabbed the faux-leather briefcase that always sat by the back door.

I remember with startling clarity how a John Deere tractor, caked with mud, sat atop a barn, rather than inside it. I stood on a woman’s concrete front steps that led to nowhere but sky. I saw a little girl’s Sunday dress draped in a tree. There was this one multi-colored afghan. I imagined that it might have been draped, for years, over the back of someone’s wooden rocker. And now, it flopped over an uprooted mailbox.

I helped some guy pick up photographs and manila folders strewn in his yard. It was a small thing, this picking-up-of-things. But he didn’t know what else to do. Neither did I. 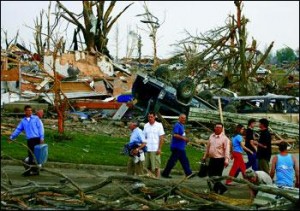 Iowa Governor Tom Vilsack wore a leather National Guard jacket that morning, and he muttered a greeting to the mayor: “Here we go again.” I wrote the words down in my spiral-bound notebook.

One year earlier, the governor had walked these same streets. He had declared the area a disaster when a flood pummeled the region. Another year; another storm. He was back again, stuffing his hands deep into his pockets the morning after a twister left a town in tatters.

So unrelenting, these storms.

They don’t play fair. And it’s hard to believe that any storm cloud could have a silver lining.

As a Christian, I might be tempted to tie a neat theological bow around the whole mess. Like I could single-handedly stick up for God or make excuses for why bad things happen on earth. I’ve never been very good at that sort of thing. It feels like putting a fresh coat of red paint on that leveled barn. Like putting lipstick on a pig. Because you can’t make storms look pretty, no matter how hard you try.

So we just sit in the rubble a while, right down in the mess.

And we don’t know what else to do but sit and weep with our friends all across this storm-torn region. The only theology I can come up with is the shortest verse in the New Testament — Sometimes you don’t know how long you’re going to have to wait to find the good in a storm. Maybe we have to wait all the way until heaven.

I walked through a tornado’s rubble that Friday in May of 2000, wondering about those sorts of things. Wondering if any good could ever come…

That morning, a guy told me about a 120-year-old country church that had been torn to shreds. So, I drove my Toyota down some rubble-strewn road, until I found the church between fresh-planted farmfields.

The glass doors of the church were, remarkably, still intact. They weren’t shattered. Just scratched. That’s important to the story I’m about to tell you, so I put it in big letters here.

Inside the doors, I found the pastor. His black pants and minister’s collar were covered in dirt.

He introduced himself as Pastor Dean. I asked a few questions, wrote down his answers. Two men stood up by the altar, one of them wiping tears with the back of his hand. Women, who had overseen potlucks and bridal showers, carried out kitchen utensils and coffee cups. A few guys walked by us, carrying the pulpit.

I remember how the pastor told me he didn’t know what he was going to preach on Sunday; 200 people would look to him for spiritual guidance. He didn’t even know where they’d worship.

“I served in Vietnam for two years,” the pastor told me. “And since then, I don’t think I’ve ever felt such a complete loss of control as I do right now.”

But, he promised, “we’ll be back up and running again.”

I thanked the pastor, and clutching my reporter’s notebook, walked out the door, never to see the church again.

All these years later, I never knew if his words about rebuilding that church were the product of wishful thinking or stubborn faith.

Fourteen years later, storms rage across the Midwest. Someone is trying to pick up the pieces in Pilger, Nebraska. Someone else doesn’t know where the pieces even are.  How do you rebuild after something like that?

Can we hold out hope for real rainbows after storms like these?

Last year, I went looking for that pastor from Dunkerton. I Googled, looking for that church that the pastor promised would be rebuilt. Googled, like I might find some sliver of a silver lining. Please, Lord? I searched online. Made some calls. Googled more. But … Nothing.

My heart sunk into my gut.

So, I called another pastor in another town at a Baptist church. “Oh ye-eees. I do believe I’ve got the number ’round here somewhere…”

I held my breathe. Jotted down the number. Dialed fast.

Within minutes, I was talking with Pastor Bill of the St. John’s Lutheran Church of rural Dunkerton. Pastor Dean, the one with the dirt-covered collar, had long since moved on.

But here’s what Pastor Bill said: the church made good on the old pastor’s promise.

That church had rebuilt after all.

If Pastor Bill were asked to fill a pulpit in a storm-ravaged town this Sunday, he’d give folks the message he once heard from a therapist who spoke about the difficulty of divorce —

As for the rest of us, the ones out here groping for answers? Well, he said that sometimes, it’s best to say nothing at all.

“Just be there. Help people. Hold them,” Pastor Bill told me. “Tell them that their pain is your pain too. We weep with those who weep. And rejoice with those who rejoice.”

I wrote down his words fast, then thanked Pastor Bill for his time. But before I hung up, I asked him what they were able to salvage from that old church I stood in thirteen years ago.

Those glass doors, scratched and marred as they are, are a poignant reminder to everyone who goes in, or who goes out. They remind everyone that the good pastor is right : the only way out is through.

And Christ is the door.