What I Learned From an 86-Year-Old Farmer

He catches me in the back of the sanctuary, where I’m straightening church bulletins, pencils, Quiet Bags.

He shuffles old feet, asks how Bible memory is going. He’s asking about the Sunday School children, but perhaps he’s asking if I’m hiding words in my soul, too?

His name is Helmer. He’s 86, and carries a narrow-tooth comb in his front pocket, a work-worn Bible in farmer hands, and Truth tucked deep into marrow.

He starts in shaky bass voice, with wisdom-rimmed eyes burrowing deep into mine:

“Blessed is the man that walketh not in the counsel of the ungodly, nor standeth in the way of sinners …

But his delight is in the law of the LORD; and in his law doth he meditate day and night.” 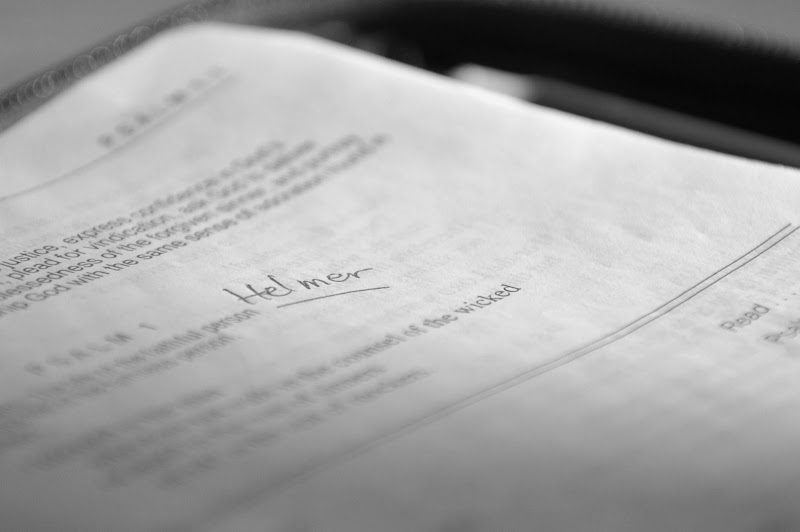 I dial the twice-widowed farmer this morning; he answers on the second ring. I tell him I’m calling to get his advice.

“How do you do it, Helmer? How do you memorize the words?” I ask him.

The old farmer tells me: If you plant words over and over again, they will take root and grow on the inside.

It’s not hard, he says. And there’s really no need to complicate it. He doesn’t have a five-step plan, or a series of index cards, or a $300 video series to stimulate brain activity.

And do you still do it, even now, Helmer? Do you still memorize the Words?

And he says he feels compelled to memorize, because you don’t always have the Good Book right beside you when you need a comforting word for someone else … or for yourself.

But isn’t it hard, Helmer, when the brain grows old, weary?

“No, no. I should say not,” his bass voice swelling in the phone receiver. “I memorize just as well now as when I was young.”

I tell him how I’ve been researching techniques for Bible memory, and how I tried memorizing all of Romans 8 last year, and how intimidating it was.

And I tell him how I should have tried something a little less difficult — and I hear his gentle, knowing “um-hmmm.”

I tell him how I came across a story on the Internet that says a rookie ought to avoid something like Romans 8 the first go-around, and should maybe start somewhere like Psalm 1.

I read him the advice from the online story: “On your first effort at memorizing large chunks of Scriptures, don’t tackle Romans. Build some confidence first by memorizing Psalm 1 or the Sermon on the Mount.”

His laugh stretches hearty and long into the phone. He knows. He knows.

Then he starts in again, on some of his favorite verses, voice waltzing on words. I flip to the verses in my own Bible, following his Word-dance with the Father.

Each Wednesday, I join Ann Voskamp in her Walk with Him Wednesday series, where we discuss spiritual practices that draw us closer to the heart of Christ. This week, we are sharing stories of Bible memorization.