The Sin That So Easily Entangles

Sometimes the sin feels so heavy,
we don’t know if we’ve the strength to heave it.

That must have been how the woman felt that day, when she came to me crying. I was sitting at the lunch table, with half-a-dozen others at a women’s retreat. She grabbed my elbow and pleaded.

I stood up and slipped an arm around her waist. We walked to the other side of the building, away from the others. She wanted to confess the Monster she’d been carrying all these years.

And yes, it was a Monster. It was a bloated, rotting, vile Sin-Monster. And yes, it was big — so big that it dug its claws into her heart and she couldn’t figure out how to shake it off.

We both knew Someone bigger.

She said she just wasn’t sure how to give it to Him all by herself. And I’d been there before, too, needing a Spirit-sister to go with me.

“Would you be willing write it down?” I asked her, and passed her a scrap of paper I’d ripped from the side of an envelope. “Could you name it?”

So she wrote the name of the thing she’d done on ragged paper, and we found a lighter by the altar. We slipped out the back door, and huddled on the back step of a patio.

“As far as the east is from the west, so far has he removed our transgressions from us,” I said. “Do you believe that?”

And she held the paper, and I clicked the lighter, and the paper sizzled, and the penned-word curled under a flame, and she dropped the burning Monster to the pavement.

And she wept. And so did I.

Where do we go with all of this sin?

We drop it at the cross — the wonderful, tragic, mysterious tree. It is the altar of sweetest sacrifice.

Jesus carried the sin of mankind on His back. And today, as we approach ever-closer to Easter, we need not cheapen the cross by thinking that the sacrifice He made wasn’t big enough to carry our sin.

He can handle our Monsters, as heavy and cumbersome, and as vile and ugly as they are. We may lay them down at the Calvary altar.

No sin is too big for a God even bigger.

Neither is our sin too small to lay at His feet.

He wants it all.

He gave it all.

He took it all. All. 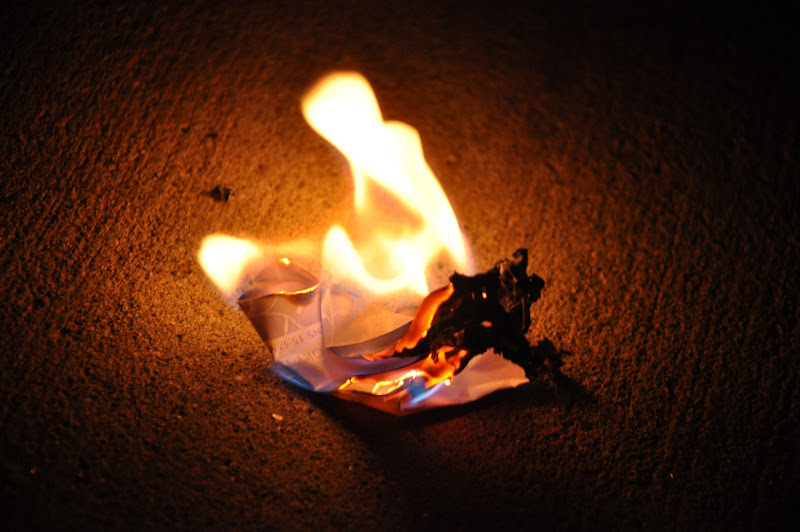 Are you having trouble letting it go? Perhaps we all do, from time to time. It can just feel so … big.

Consider naming the monster. Confess it by writing it on a rock and tossing the rock into a river. Or, write your burdens on a slip of paper, and send it out with the day’s garbage. Tell a friend. Or confess it personally in prayer. Or, perhaps, burn your list of transgressions in a fire.

Last night, I wrote my (many) sins on a slip of paper, and watched them turn to ash.

Father, let me not pick it back up again. For You said from the cross: “It is finished.”

Each Wednesday, I join Ann Voskamp and her community of pilgrims as we consider spiritual practices that draw us nearer to the heart of Christ. Today, we consider ways we Prepare for Easter.
Photo: My sins, set afire last night.