At week’s start, I finally tackled three piles of mail that had remained untouched during our Thanksgiving holiday weekend.

There, hidden between newspapers, bills and a glossy Lillian Vernon catalog, lay our own version of the Ten Dollar Blessing.

Some background: A few days ago, Billy Coffey of What I Learned Today wrote a beautiful post about a man who plopped a ten-dollar bill on the table of two customers at a diner. It’s a wonderful story. Go read it. A few days after Billy’s post, Tina Howard, who writes over at spaghettipie, said she was deeply touched by Billy’s post. So she issued a challenge, calling on others to give ten bucks away, beginning Dec. 1.

“Pray for an opportunity, and when it arises, give a ten dollar bill to someone who needs it. … While it doesn’t feel like much, in God’s hands that ten dollars has the potential to change someone’s day. Or his or her week. Or life.”

Tina extended the challenge to her readers, and then invited them to share their experience on their own blogs.

I considered taking the challenge, but wondered how I’d blog about it later. I’ve blogged before about good deeds, and before hitting “PUBLISH POST,” I have often felt a motive-checking twinge stirring within: “Is this boasting?” I ask God, “Should I write about things I do for others, God? Lord, would you prefer I kept this one between the two of us? Or will someone be encouraged to do likewise if I tell how you’ve been working in my heart to serve?”

Some things end up on the blog; others don’t.

But this one — this Ten Dollar Blessing — I simply must share. For it’s only right to share when one has been on the receiving end of the blessing.

Our Ten Dollar Blessing arrived between neglected bills and catalogs. It was a letter addressed to “Miss Lydia Lee.”

“Lydia,” I called downstairs, “you’ve got to come up and see this, honey!”

She bounded up the stairs and ripped into the envelope with the eagerness of a 7-year-old who rarely gets mail. Lydia read aloud:

Thank you so much for your shoebox full of gifts for Operation Christmas Child! Your shoebox looked great. … Thanks for blessing a needy child and for being part of the Life 96.5 Shoebox Challenge! — Luanne, Suzanne and the Life 96.5 Staff

The letter came from the Christian radio station. Among the thousands who made shoeboxes, I don’t know why Lydia received recognition — though there’s a brief story posted about it on the station’s website here — and I’m not yet sure how the radio folks tracked Lydia down.

But what amazed me most was this: On Dec. 1, the day when the Ten Dollar Challenge began, my little girl received a thank-you note along with a gift card to Walmart.

The amount of the gift card: Ten dollars.

Lydia beamed. So did Mom. (Anna, our four-year-old, sobbed uncontrollably questioning the fairness of the whole deal.)

Now, I don’t think this is exactly what Tina intended with her Ten Dollar Challenge, but these words of hers made perfect sense on a Dec. 1 night in northwest Iowa: “In God’s hands that ten dollars has the potential to change someone’s day.”

I asked Lydia if she would consider “paying it forward,” giving the ten dollars to someone who really needed it. I even encouraged her to give some to poor Anna, tear-stained over the injustice of the whole thing. Lydia and I talked again about how it is greater to give than to receive, as we had discussed back when we first packed the shoebox gifts for Operation Christmas Child (See Shoebox.)

Lydia gave this all brief thought. But being seven and all, she said she had been eyeing a certain Littlest Pet Shop toy at Walmart. And, well …

Yes, it is better to give than to receive. But when you’re seven, it’s pretty cool to receive with a grateful heart. 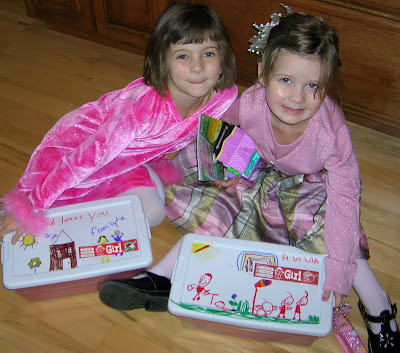 The girls with their Operation Christmas Child
boxes back in November.

***
Related post: Robert Hruzek’s What I Learned From … The Generosity of Others.