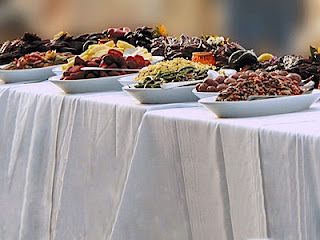 Pull up a chair, friend.

Gather ’round this table, where guests “get down” to Truth.

I realized this morning that this week marks my one-year blogging anniversary. This table has never been empty, for a place has always been set here for Jesus.

But there were times when it was just the two of us: me and the Guest of Honor. He fed my soul, and I wrote it down as an offering of thanks. Only a few others dropped in from time to time to see what we were doing, my Best Friend and I.

And then something happened: Guests began to dine with us. Community grew. Those who dined here began to leave comments before they left, and in turn, invited me to dine with them around their own tables.

All in all, it was a Feast for Souls.

But sometimes, my appetite for the “company” grew more quickly than my interest in the Guest of Honor. I hurried to set up more chairs for more guests. I worked hard to cook up something gourmet — so that you’d leave feeling satisfied and want to come again.

I got overly concerned with the “guest list.” Had it grown since the last time we dined? (I track it, you know, from a little meter in the corner.) And after the party was over, I would look around to see if more comments were left at the table this month, compared to the last.

And I would wonder: Do they leave here feeling fed, and will they come back?

And in my wondering and pondering and pleasing and primping, I sometimes lost sight of the Guest of Honor. I had relegated Him to a folding chair in the corner — even though He was the reason I began serving this Soul Food in the first place.

And on days like those, I wondered if I had pimped out my God. I wondered if I’d used the Honored Guest as blog fodder to draw a bigger crowd to the table.

And I thought about closing the door — keeping a table set for two.

But, then, the Honored Guest pulled His chair in closer to mine and beckoned me:

He reminded the Martha inside of this body that the Mary could “choose the wiser.” And so I sat at His feet, and He stilled my soul.

And He reminded me that I was meant to live in community,
and that it’s OK to invite you here, too.
And that somewhere in these stories we share,
someone else might see Him at this table, too.
That when I falter in this walk
And when I lay bare my stumbles,
someone here
might see that it was He who picked me up,
And that He could pick them up, too …
This One who I had put in the corner
(But this One who was still very much in the center.)

“How can I ever let God’s grace fully work in my life unless I live in a community of people who can affirm it, deepen it and strengthen it?”
— Henri Nouwen

And that’s what you’ve done, dear friend. You’ve strengthened me and affirmed me and deepened what it means to live in community — as we grope through life listening for His voice.

You’ve done sacred and holy work in a comment box,
at my table,
and then at your own.

You feed souls. You’ve fed mine.

Shall we rest now at His feet?

In recent weeks, I have added “Soul Food” to the left-hand rail of my blog — links to devotionals, news stories and posts (many by some of you), who have brought flavor to this table. Thank you.

Because your love is better than life,
my lips will glorify you.
I will praise you as long as I live,
and in your name I will lift up my hands.
My soul will be satisfied as with the richest of foods;
with singing lips my mouth will praise you.
— Psalm 64:3-5