Roller Skates, Disco Balls and a Birthday Party (A Story of Christmas)

It was bedtime, half-past-too-late. And the moon floated high in the velvet December heavens.

A mama snuggled next to her daughter, before bedtime prayers, and she asked the questions —

“Do you remember that year, when you had your birthday party? The one at the roller-skating rink?”

Yeah. The girl remembered. How could she forget?

There were disco balls shimmering overhead, and there were Bieber tunes, amplified too loud — at least according to every single mama sipping caffeine-free Diet Coke on the edge of the rink, all of them praying their Gumby-like skaters would get tired and just want to go home. Girls were skating giggling circles around that room, and around each other.

Yes. The daughter remembered that party.

Most obvious question of  the century.

How could a kid forget that kind of thing, when everyone you invited to your party is twirling in pairs in the glittering middle? And your back is against the wall.

The mama could see her daughter’s head bobbing her “yes” in the dark.

Then, cuddled under that polka-dot quilt, the mama told why she was asking all these questions.

She reminded her how a birthday party was about to happen. Candles would be lit. Presents with shabby-chic tags would be handed out. Someone would remind someone else that the gift receipt was in the box if the shirt didn’t fit right. The ham would be as salty-good as it’s ever been. Uncle John would have the grandest story to tell, by fire-light, and everyone would toss their heads back in laughter.

And it would all be wonderful, and sparkling, and shimmering, and you would all know that you had been in the midst of something pure and marvelous and lovely. Because the world is a magical place at Christmastime. As it should be.

Bring on the presents. Pour the fine wine. Set out the china. Enjoy.

But what if the honored guest felt, somehow, left out of His own party? Like a prop on the mantle, as a tiny resin figure in a tiny resin manger?

The mama and her daughter stared into the quiet darkness, thinking a long time about what it’s like to be left out of your own party. Then they prayed. They prayed that they wouldn’t leave Him out, and that no one else would either.

When they prayed, they knew this for sure: He’s the life of the party. And He’s come to give life to all the people at the party.

The life of the party holds out this gift: Himself.

And the gift tag? It has your name on it.

“For God loved the world so much that he gave his one and only Son, so that everyone who believed in him will not perish but have eternal life.”
~ Jesus Christ 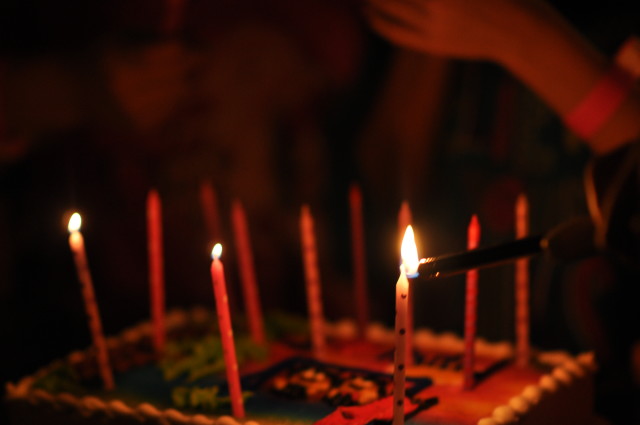