Story has the power to change the world, one paragraph at a time. That’s why I invite a storyteller here every week to share a story with us.

This week’s featured storyteller is Dave LanderLaan, a pastor and personal friend of our family who is has become a friend to many through his spiritual encouragement on social media.

Be sure to come back Wednesday to link your own stories and photos with us in the #TellHisStory community.

A Christmas Cup of Coffee
By Dave VanderLaan

Two friends were talking one December morning over a breakfast of eggs, bacon, toast, pancakes and one of those bottomless pots of coffee. After catching up about the kids and the wives, various mechanical difficulties with their cars, and doing an inventory regarding job satisfaction, the topic swung around to the Christmas story. 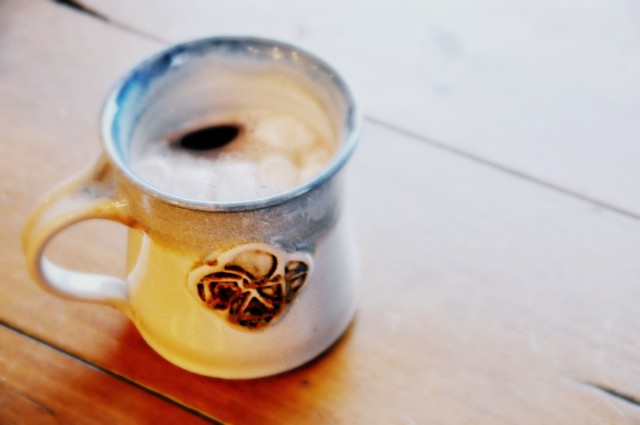 “I grew up in a home where we all went to church every Sunday,” said the tall and lean one named Ed. “So I’ve heard the Christmas story for as long as I’ve been breathing. But there’s one thing about that story that’s always bothered me.”

His friend, Tom – who wasn’t quite as lean but stood six inches taller – nodded.

Tom had grown up, so to speak, in the church as well. He was a skeptic by nature, though, and a little on the cynical side. In his own life, he had noticed the embers of enthusiasm about his once red-hot Christianity beginning to cool off.

Christmas used to mean something to him. But the last few years he found the story of Christ’s birth wearing on him to the point where the story seemed to be worn out. God coming to earth as a baby didn’t grab his attention like it used to. Sometimes it even seemed like a bunch of malarkey.

Hearing his friend open the door to discussion with his “one thing that’s always bothered me” comment, Tom verbally lurched ahead and put his own thoughts on the table. “You, too? I’m not sure if I buy it anymore.”

“I’m not questioning the truth of the story,” Ed responded. “I believe it. When you’re dealing with God, I figure where there’s weirdness and logical unbelieveability, God’s right in the middle of it. The Christmas story has to be true. If God wanted to put his hands around the neck of humanity and choke out its life, there’s nothing to stop God from doing just that. Why – if God didn’t want to give humans a chance – why would God send Christ as a way out for us humans? The deck is already stacked in God’s favor. Without someone to make things right between us and God, there’s nothing you or I could ever do to escape the judgment of God. One snap of those divine fingers and – “Hasta la vista, baby” – we’re history. ‘God-become-flesh’ lying in a manger – which then translates into the birth of a Savior – that’s a gift. God didn’t have to do that. That’s why I’m convinced the Christmas Story is true. What bothers me is why no one ever mentions the smell.”

“The smell?” Tom replied rather caustically. “You’re saying this story ‘smells’?” So much for venting my misgivings, he thought. “You think there’s something fishy going on? But you just said you believe God came as a baby.”

Ed calmly slurped a sip of coffee and then set down the cup. “The smell I’m talking about is the one in the stable. Don’t you ever think about the smell in the stable where Jesus was born? How come nobody ever mentions the smell?”

Tom looked at Ed with incredulous disbelief; he couldn’t swallow that this is what bothered his friend. With restraint making the veins in his neck bulge, Tom still managed to spew forth, “God supposedly comes as a baby and yet you’re bothered about no one mentioning the smell in the stable?” Then no longer being able to hold his sarcastic side in check, he flippantly said, “The smell? Why, that’s the smell of salvation.”

Ed’s face went lifeless. He picked up his coffee cup but before he could gulp another mouthful, he carefully set the cup back down on the table. “You’re right.” There was astonishment in his voice. Then his face brightened. “That makes perfect sense.”

Now Tom’s face went blank. His vocal chords quietly wheezed out, “It does?”

“Absolutely,” said Ed as his eyes met his friend’s. “Jesus was a holy child – pure and innocent – but he wasn’t born into a holy world. He was born in a place that to our way of thinking, anyway, was far from holy – a place where you needed to watch where you step, if you catch my drift. The world he came into wasn’t sanitized; it wasn’t sterile. There wasn’t wrapping around the world which said ‘Sanitized for your protection’; it was a mess. It was smelly and dirty – just like the stable. The world – you and I – needed to be cleaned up. That’s why God sent a Savior.”

Ed reached for his coffee cup, put it to his lips and drained it. He then grabbed the bottomless-pot – which was by now almost empty. While he was pouring yet another re-fill, Ed stared at the steaming black liquid, watching as it ebbed up the inside of his mug. He tossed in a little cream, grabbed a spoon and began to stir with a slow, mesmerizing motion, lost in his thoughts. As Ed pulled his gaze from the cup and focused on his friend, he finally broke the stalemated silence.

“Salvation is dirty work,” he said. “Why shouldn’t it smell?”

Dave is an ordained minister in the Reformed Church in America. He’s married to Lori and they live in northwest Iowa with their triplets who are freshmen in high school. Dave wants as many as possible to know that God seeks to be in a relationship with them – a relationship that is not based on a ‘do more, try harder’ mentality but is grace-based, resting in the finished work on the cross of what Jesus has done for you, not what you have done for Jesus.