Today, I am honored to share with you one of my favorite writers: Lyla Lindquist of A Different Story. She’s smart, funny and wonderfully gifted in writing. She shares profound insights a few times a week over at her blog, but today — when she guest-posts over here at Getting Down With Jesus — she decides to talk about “axe murderers” and “cut-out friends” instead. 🙂

And somehow, she has convinced me to publish a photo (below) of me looking like a crazed killer. Hey, that’s what friends are for.

Seriously, Lyla is great, and I know you’ll like her.

Today, we’re participating in a High Calling Blogs project called “You Are Real.” So, Lyla and I are guest-posting at one another’s blogs this morning, talking about how we’ve developed “real” friendship out on the big ol’ World Wide Web.

I’m posting over at Lyla’s, and you can get there by clicking here.

But stick around first to read what Lyla has to say here: 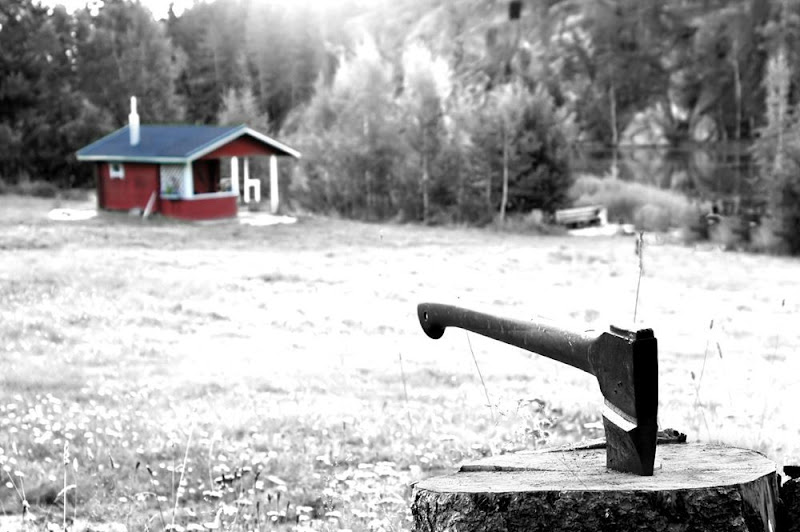 ON AXE MURDERERS AND CUT-OUT FRIENDS
By Lyla Lindquist

“Don’t do it, Mom. It’s dangerous,” Isaac said, tossing a football through a crowd milling around on a mowed alfalfa field.

“Well, we’re not talking to her.” JP jogged up the line to catch the ball. “People you meet on the Internet are all axe murderers. That’s what you told us.”

We’d already been over this ground. Of course they weren’t all axe murderers.

Some used poison while others preferred explosives.

But when I neither blew up nor dropped over dead after enjoying a scrumptious gift of homemade jam sent from a sweet friend in Alabama, they concluded there must be a time release. My moment of peril was still coming.

And it would come with an axe.

Jennifer left her axe in the camper that weekend last summer when we first met three-dimensionally in Sioux Falls at a Christian music festival. And I didn’t fear the axe. Not much, anyway.

But I suppose I may have had at least as much anxiety about that meeting as my kids pretended to have. Would she meet me — real me — and find me to be just a poser and a fraud, a dork that hides behind fancy words and clever phrases like the Wizard of Oz behind the curtain?

And how did this happen, anyway?

I started blogging in the pursuit of some goals I’d allowed to expire. It took months before I even acknowledged that what I was doing was “blogging.” I just told folks I was “doing a little writing online.” As I wandered around trying to find an outlet for my stuff, I’d stumble onto other blogs and read of people and their “bloggy friends,” a term that still makes me just a tiny bit queasy.

Folks who know me beyond what Jennifer might call the “two-dimensional words on the screen” can bear witness that I practice a lazy introversion. I don’t pursue relationship, and in fact normally resist it.

I sure didn’t want any bloggy friends to keep track of.

But I should know this by now: that against which I set my jaw is that same thing toward which He’ll turn my heart.

Not long after I inexplicably joined a network that was all about community forcryingoutloud, I started sharing a little bit of life with a homeschooling mom, an online English professor, a youth leader, and others. They’ve prayed for me, encouraged me, and allowed me to do the same for them. They’re real people who’ve let me into a little corner of their lives through nothing more than a comment box or an email.

In a display of true heroics, a fellow introvert and I spent nearly an hour on the phone, both of us talking. Neither of us died, although I may have had an extra trip or two to the bathroom in anticipation of the call.

But here’s the thing. These relationships, they start with a few safe words pecked out on a keyboard between friends who seem no more than cardboard cut-outs online.

But if we let them, they grow into something that is, yes, very very real.

Jennifer didn’t politely meet me in the pasture and go on her way. She stuck around to pursue something real. We’ve met for lunch a couple of times. We email now and again and a couple of weeks don’t usually go by when I don’t hear her voice at the other end of the phone. (And because real friends get these things, she usually texts me first to see if I can cope with such a thing.)

Yes, we frequent each other’s homes online, but not long ago she welcomed me into her home on the farm when I came through the area on business. (And her daughter Anna let me use her bed.)

And though she’ll tell you it’s nothing of the kind, she always makes the dork in me feel like I’m sitting at the cool kids’ table.

A few weeks ago we talked by phone while I was on the road looking at storm claims. Afterwards my business partner, who was driving, turned and said, “You don’t talk to anybody on the phone. She must be a real good friend.”

She was right, you know. Very unexpectedly right.

For this thing has been very unexpectedly real. 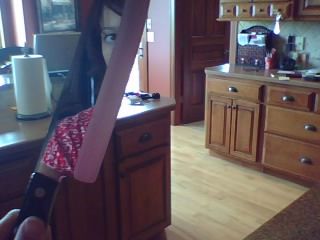 Knife: When I suggested Jennifer go sharpen her axe, she replied with this photo via cell phone, saying “I’m more into knives lately.”