I See The Moon, The Moon Sees Me 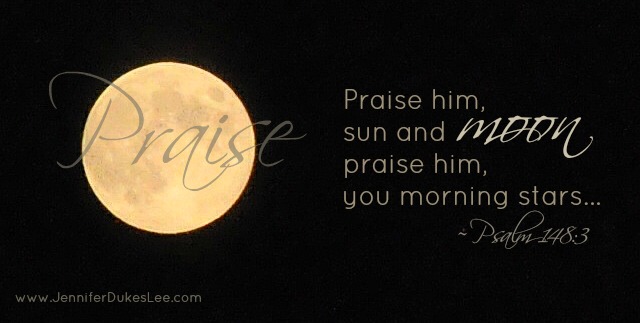 That Man in the Moon stared at me through the front windshield, all the way back to the farm. It shone like a creamy-pearl, like a compass, like it has shone over countless billions of others in the course of human history.

It seemed a silly thing to do, to consider the moon all the way home. Except it didn’t seem so silly when I remembered that we mortals have done just that for, … well, forever.

That same pearly face has inspired romantics and lyricists and adventurers in space suits. It has been lassoed, jumped over, and stepped on. People have howled at it, blamed it for all kinds of bad behavior and accused of it being made of green cheese. Margaret Wise Brown even taught us how to properly say goodnight to it.

And, on page 105 of one of the most life-changing books I’ve read, a dear Jesus-sister chased that lily-white moon, that “incandescent globe grazing ours. Her gravity pulls, pearl filling deepening sky, stringing me unto the universe.”

And so, this… This one night passing along country roads in Iowa, gazing upon the moon. And I couldn’t stop thinking about one truth that pressed into my being: A young Nazarene named Jesus would have beheld it, that very same moon. That one moon hanging over me — in full, in gibbous or like a fingernail on velvet — once waxed and waned over a holy Christ-child.

I felt flushed by glory just thinking about it. There I was, looking full into the face of the very same orb that swung over Bethlehem, and now swelled over my Iowa. Over me.

I’m still transfixed by the wonder of it.

And I wonder, if at age three, Jesus might have looked up at the moon, tugged at his mama’s robe, then pointed a pudgy finger toward Heaven, toward a face He’d found in the moon, to say, “Look mama, eyes on the moon…”

And then, I wonder, if He knew yet that He made that face, in the beginning, when He helped hang the moon and stars in the sky. I wonder if young Jesus had yet memorized the verse in Psalm 148 — “praise Him, sun and moon” — and if Jesus knew already that the verse was about Him, the child with the finger pointed upward.

And if not then, … soon enough.

For the boy was fully God and fully man. He made that pocked moon with lunar maria “seas” for the eyes, nose and mouth of a Man in the Moon. And was it for fun that God made the moon with a face?

Did He make the moon the way it did — with no light of its own, only to shine the light of the Sun — so we’d think of the Son when we looked at the moon?

And if not right then at age three, in time He would certainly know all of this would come to pass as well, centuries later  —
— That in the 2nd century, someone would correctly theorize that the moon affected tides.

— And that  in 1609, Galileo Galilei would note that the moon was not smooth but had craters.

— And in 1969, a man would step upon that moon and utter, “That’s one small step for man, one giant leap for mankind.”

— And that one moon would inspire songs and poems and artists and authors.

— And that child upon child would see a face, and beg a mama to look.

— And that in November 2012, a woman would look up at that one glowing orb, knowing that when she looked at the light, it would always, always point her toward Home.

And He would always, always love her to the moon and back.

“I see the moon,
the moon sees me.
God bless the moon,
And God bless me.”

Here for God-Incidences and God-Bumps?

We write in community every Wednesday about the God-Things that make you go, “Hmmm…”

Some call them coincidences. We call them God-incidences. And those goosebumps you get sometimes when you know the Holy Spirit is at work? Yep. They’re God-Bumps.

Want to join the chorus of words for our God? Pick either button above, attach it to your post, tell your story. Then, link up with the weekly post right here!