Unbroken Love-Circle
of lights in paper sacks, quarter-mile long.
Unbroken Hope-Circle
of those who survived
and those yet grieving
Side-by-side
Step-by-step
Believing.

I showed up at 10 p.m., slipping in late to pick up my daughter Lydia. On the south end of the football field, under the goalposts, Lydia had come to celebrate a friend’s eighth birthday at our county’s Relay for Life.

The birthday girl, Lindsey, could have taken her first-grade friends to Chuck E. Cheese. Or she could have had a picnic in the park. She could have made a haul on Webkinz and Hannah Montana trinkets, stuffed into tissue-filled gift bags. But, no, she chose to come here on a Friday night, where candlelit bags flickered with hope. 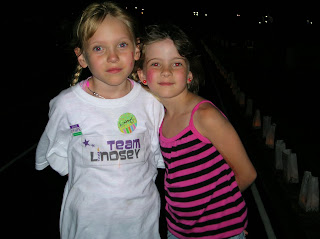 No gifts, please, she said. Give to the American Cancer Society instead.

Lindsey is a healthy girl. Never had cancer. She just thought it was the right thing to do.

“Instead of getting presents, I wanted to help people,” she said.

I slipped in to this circle of hope about two hours before the party ended. I walked past hundreds of luminaries.

I walking alongside my friend Al, who is a survivor. I stopped to say hi to my friend, Brendan, a teenager diagnosed last year. He was this year’s “honorary survivor” and delivered a moving speech:

“Even though I seemed to be surrounded by cancer, I never thought I’d get it,” he told the crowd. “I mean, this doesn’t happen to 15- or 16-year-olds. And even if it did, I’d never get it. I kind of had an invincibility thing going on. Then one day I felt a lump.”

Bag by bag, as I walked along the track, the lump in my throat grew. White paper bags bore the names of friends, a neighbor, someone in church. Some surviving; others gone.

And then this. This stopped me: 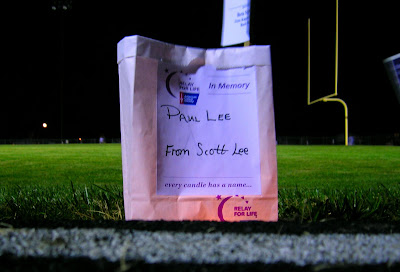 A lit bag in memory of my father-in-law, from my husband to his dad. … Paul died in January after a year-long battle with leukemia.

Who of us has been untouched by cancer?

In the US, cancer accounts for nearly 1 of every 4 deaths, according to the American Cancer Society.

Who of us has been untouched by the courage of those diagnosed?

Here, in this circle, hope prevailed — hope for those surviving, Eternal Hope for those gone, and hope that cancer will one day be eliminated.

(I penned this poem in response to Hope, at the invitation of L.L.’s writing prompt: “I slipped in …” This is part of Random Acts of Poetry.)

Round they went and
Round again
Marking time
… and I slipped in. 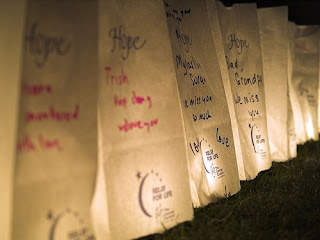 Axis spins
our life again
when, undetected,
“it” slips in.

Unwelcome guest
in flesh disguise
finds home within,
then multiplies.

Round they go
and round again
Chemo, scalpel,
Hope slips in.

Unbroken ring of
candlelight
I slipped in …
to pray tonight.

The poem is part of L.L.’s poem prompt and part of Random Acts of Poetry