This week’s featured storyteller is Sam Van Eman, a gifted storyteller. I have the privilege of serving with Sam on The High Calling editorial team.

{A Note from Sam}

A Beautiful Trench It Was began when I surrendered a vulnerable story to a writers workshop and listeners asked, “Is there more where this came from?” They may have meant quality, but I took it as quantity, so I asked myself the same question. And the answer? Thirty-five tales that have shaped my life for good.

The following vignette, called “Shepherd,” occurred not long after Mom and my sisters and I left Dad hung over in the driveway as we escaped to Florida. I was 12.

I prefer the audio version of “Shepherd,” but you may read it as well. Thanks for listening.

{I, Jennifer, encourage you to listen to the audio version of this story as well. Click here to listen. WELL worth your three minutes.}

Not long after we moved to the flea market, the pastor of a small Pentecostal church behind our trailer asked me to mow once a week if the grass grew. I said yes. I used his push mower and followed behind with a weed whacker and its orange extension cord that barely reached the far end of the small front lawn. I swept every clipping, then made a habit of standing back to admire the job before checking in with him to see if he needed anything else. He never had to inspect my work. He paid me five dollars, fifty cents of which Mom made me tithe the following Sunday.

Pastor and I often worked in the back field together—the same field that butted up against our chain-link fence. It was a 10-acre plot of ground that had been wooded. Over the course of a year, he cleared it, bit by bit, now in his early 60s, and hired someone else to dig out the retaining pond where I caught my first water moccasin—which I promptly carried into the trailer.

The field filled quickly with weeds but he kept it mowed which looked alright. He’d get off the tractor occasionally to pull a root and to give his kidneys a rest from the jostling. I knew they hurt because they hurt mine too once he showed me how to take over. He kept on cultivating that ground and making it nice, enough so that in time we used it for softball practice.

I guess it’s what he was trying to do with me, too. Cultivate. He taught me how to drive a stick shift; gave me a fishing pole. When the church hosted a camping trip for the boys, he paid for me to go. He included me in his daily chores. And with only a secretary and a very part-time cleaning lady, he somehow managed to keep the brunches regular and the bills paid, an example so different than my father that I didn’t realize I could learn from it. He was my shepherd, even the time when Donna and Tracy passed notes in the pew and Pastor looked down from the pulpit to see Donna giving Tracy the bird.

Every once in a while these decades later, I hear one of the songs we’d sing in that small sanctuary and I get transported back in time—churches ago, traditions ago. I see Pastor’s head sweat, his handkerchief soaked from repeated swipes while he stands at the microphone in front of us and leads the congregation. The pines outside in the sand lot whisper that a breeze is coming, and we give thanks. The delight of cinnamon rolls creeps in through the window from the market next door and reminds us of heaven. Then Mom, in her troubles, grabs my hand as she fixes upon the Cherokee woman whose black hair and old, wrinkled skin and long earth tone dress sway in rhythm to the prayer she sings. Her voice, angelic, waves in a tribal pattern of haunting beauty, a mix of heritage and the Spirit of God rising out of the earth and her own wounded heart, and we enter in:

“Let not your heart be troubled,

his tender word I hear,

and resting on his goodness,

I lose my doubts and fears;

though by the path he leadeth

but one step I may see:

His eye is on the sparrow,

and I know he watches…me.” 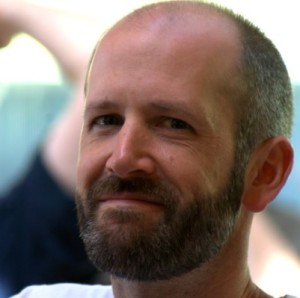 at The High Calling. As a former public school teacher and current mentor to wilderness leaders, he has taught in barns and board rooms, canyons, classrooms, and auditoriums. He is the author of On Earth as It Is in Advertising?: Moving from Commercial Hype to Gospel Hope

, and a storyteller at A Beautiful Trench It Was. Sam lives with his wife and two daughters in central Pennsylvania.