Ed Thomas: “We Have a Choice”

“There is always going to be adversity. And you know, I always tell my players, I think the greatest power God has given any of us, is the power to choose. — Ed Thomas, an Iowa high school football coach shot to death this morning. 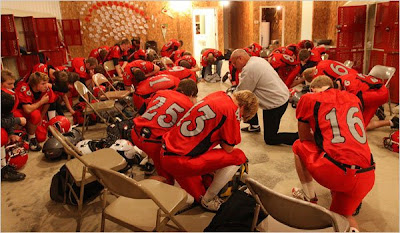 Parkersburg Iowa, has been here before — in this place where the sting of pain cuts so deep you don’t know how you’ll ever come out on the other side. A little over a year ago, a tornado cut through town, killing eight people and flattening hundreds of homes.

But Ed Thomas, the town’s legendary football coach, wasn’t the kind of guy to crumple under the weight of tragedy. And he wouldn’t let his community fold under it either. Thomas helped coach this town of 1,900 back to its feet.

“You get beat up, battered, but you get back up off the ground,” Thomas told the New York Times last year as his town and team recovered from the F5 tornado.

But what do you do when your point-man is taken out, the guy who would be pulling you all into the locker room at halftime with a rousing speech that made you want to win just because he wanted it so bad?

What do you do then?

The coach died this morning when a gunman shot and killed him in the school’s weight room. About 50 students were in the building at the time but were not injured. A suspect — a former student — is in custody and has been charged with first-degree murder, according to The Des Moines (Ia.) Register.

And now, a grieving community is left without the guy in the red Falcons windbreaker who’d sit us down to tell us that we have a choice to make.

“Our choice was: Are we going to feel sorry for ourselves, or are we going to get back up off the ground, start to rebuild and move forward? There was never a question in my mind.” — Thomas, speaking at an athletic banquet in Iowa last month, recalling the May 2008 tornado in his hometown. (TV9 Video link)

I don’t throw the title “legend” around lightly. But Thomas was one. He really was.

Thomas started coaching in Parkersburg back when Gerald Ford was president. He had nearly 300 career victories and was named the NFL National High School Coach of the Year in 2005. Four of his former players are currently in the NFL.

Thomas, 58, was just as impressive off the field — if not more so.

Last month, Thomas told a group of high school athletes last month that he and his wife were in the basement praying when the tornado ravaged their town. In an instant, his home was gone. So was the school, which he called “my second home.”

“You know, it’s not about the possessions and the things that we cherish and own,” he told those gathered at the athletic banquet. And then he offered the sort of candor about God that you won’t find in public-school textbooks. Yet it’s the kind of Truth written on men’s hearts, and he apparently wasn’t afraid to share it.

Here’s what he said: More than anything, relationships matter, and the one with God comes first.

“That’s what it’s about right there,” Thomas told the athletes.

After the tornado ripped through town, city crews were so overwhelmed with work — restoring power, cleaning up streets — that they had no time to dig graves for some of the Parkersburg folks who died in the tornado. So a bunch of Thomas’ players headed to the cemetery to dig graves with shovels. (YouTube link.)

Last fall, the coach and his team were welcomed to the football field by the cheers of a “great cloud of witnesses,” who huddled on new bleachers for the first game of the season. The game was played on the newly rebuilt and renamed field: “Ed Thomas Field.”

You get the feeling that when folks were hammering and drilling and digging last year, they were doing more than rebuilding their town with wood and nails. They were building up character and perseverance — a storehouse from which they will draw heavily on this day.

Restoration work like this has always begun at the end of a nail — finding completion in the hearts of humanity.

“We are better because of what we had to go through,” Thomas told the athletes at the banquet last month.

Right now, as eyes blur with tears and hearts break wide open, it’s hard to see how this could make anything — or anyone — better. The loss cuts too deep. So we ask time-worn questions like, “Where was God?” “Why would He let this happen?” “Is our God a good God?”

More than once, Coach Thomas hinted at the answers to some of those questions. He told us that it’s right there, in the heart-wrenching pit of pain, where a man is made. “Character is built in the midst of adversity,” Thomas said.

The coach was able to testify to the presence of God’s grace in the hardest of places.

Last year, on that first game of the season when the team made a miraculous return to their home field, someone made a sign that said: “Falcons Rise Again.”

On this, a day of a great coach’s home-going, I post another sign here — in big, Falcon-red letters:

Father God, may the bleachers of Heaven be full on this day when Coach Thomas steps onto your Field for the first time. And when the applause dies down, and all eyes are fixed on the hero we lost today, may all of Heaven hear You speak the words: “Well done, good and faithful servant.” Amen.

Video: The Des Moines Register followed Coach Ed Thomas and the A-P High School football team for their first home game following the tornado of May 2008.