Becoming a Part of the Story

← Previous Next →
We dropped into the Story, and we were changed.
The text of the story — the living Word –is etched on our hearts.
Yes, we put on the costumes, and posed and played the parts,
but that was just what you could see through the camera lens.
Because when the Word became flesh and dwelt among us,
we became a part of the story.

And now, three days after much of the world has returned to … the world,
I want to stay in the Christmas story.

Our journey through the Christmas story — as told through members of my Iowa church — concludes today. (Members of our congregation played the parts of the characters.)

From Luke 2 and Matthew 2 (The Message)

When the eighth day arrived, the child was named Jesus, the name given by the angel before he was conceived. Mary and Joseph took him to Jerusalem to offer him to God as commanded in God’s Law.

In Jerusalem at the time, there was a man, Simeon by name, a good man, a man who lived in the prayerful expectancy of help for Israel. … Led by the Spirit, he entered the Temple.

As the parents of the child Jesus brought him in to carry out the rituals of the Law, Simeon took the infant Jesus into his arms and blessed God. “God you can now release your servant; release me in peace as you promised. With my own eyes I’ve seen your salvation.” 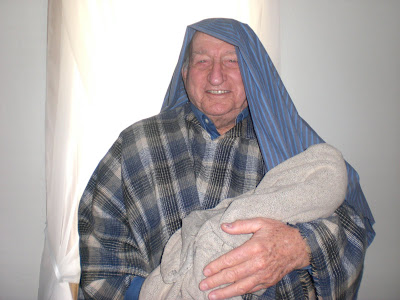 (Meet Selmer, twin brother to Helmer, and sister to Hazel, all members of our church.)

Anna the prophetess was also there. She was by now a very old woman. … She never left the Temple area, worshiping night and day with her fasting and prayers. At the very time Simeon was praying, Anna showed up, broke into an anthem of praise to God, and talked about the child to all who were waiting expectantly for the freeing of Jerusalem. 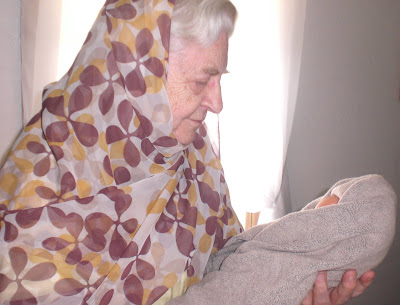 (Meet Hazel — humble and beautiful Hazel — who exudes the very Spirit of Christ.)

Herod then arranged a secret meeting with three scholars from the East. Pretending to be as devout as they were, he got them to tell exactly when the birth-announcement star appeared.

Then he told them the prophecy about Bethlehem, and said, “Go find this child. Leave no stone unturned.”

Instructed by the king, the scholars set off. Then the star appeared again, the same star they had seen in the eastern skies. It led them on until it hovered over the place of the child. They could hardly contain themselves. They were in the right place. They had arrived at the right time. 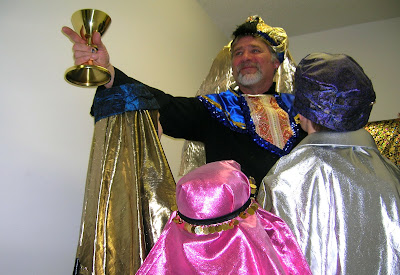 (Meet Rich. And what a good sport he is to play the part of Herod!)

The scholars entered the house and saw the child in the arms of Mary, his mother. Overcome, they kneeled and worshiped him. Then they opened their luggage and presented gifts: gold, frankincense and myrrh. 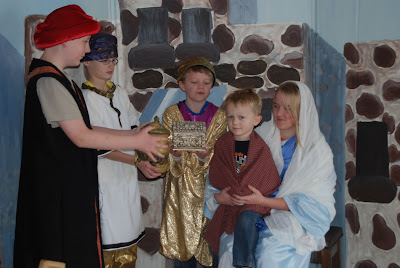 In a dream, the scholars were warned not to report back to Herod.
So they worked out another route, left the territory without being seen,
and returned to their own country. 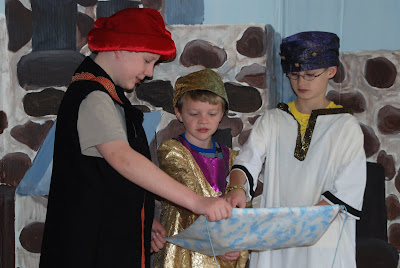 God bless you as you continue to step into the story of the Living and Active Word. This story is more than words on a page of history; it is THE Word, who became flesh and lives in us still. Grace and peace to you.