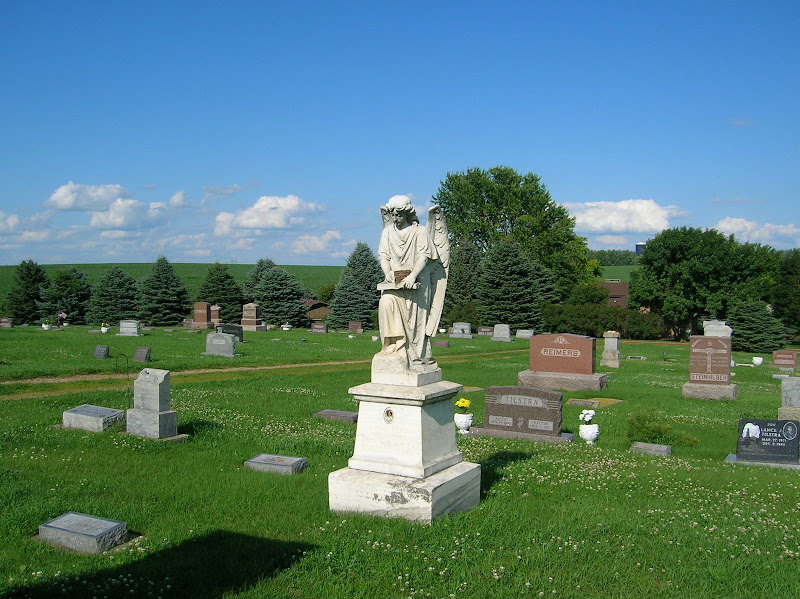 She’s buried six feet below the grandest of all the grave markers in the cemetery east of town. Her husband had selected an angel on a pedestal emblazoned with his bride’s photograph — an extravagant option nearly 100 years ago.

For a long time, I knew her only from the photo and a few words etched into the pedestal. Kneeling in the grass, I traced the time-worn letters with my fingers:

She was 34 years old — probably a mother, I figured.

I haven’t visited her grave for some time now. On this cold January day, her angel is encased in a two-foot snow drift. But when I visit the cemetery on warm summer days, I always stop here at her graveside.

I imagine a life invested by a young mother on the Iowa prairie some 90 years later. And I consider: How am I investing my own?

Even since I was a child, I’ve done this. I have combed cemeteries to look at gravestones and imagine lives lived in The Dash* — the moments between the Launch and the Landing.

At the side of a veteran’s grave, decorated with tiny flags pushed into May dirt on Memorial Day, I’d imagine holidays spent on war-torn ground.

At a child’s grave, flat to the ground, I would see wobbly first steps, hear first words and feel kissed boo-boos.

At the grave of an 82-year-old grandmother, I would feel the fresh sting of tears as I remembered my own.

In my home cemetery, I would visit the graves of Margaret and Helen and Doris, and I would remember their cookies and funny hairdos and shaky-soprano voices.

Unseen snippets of lives would dance in my mind:
Heads bowed around a Thanksgiving table.
Snorting laughter around an evening fire.
Painful tears around a child-sized casket.

As a child, I was drawn to the gravestones of children. I held white paper to their gravestones, and used crayons to make rubbings of their birth dates and words like: “Now I Lay Me Down to Sleep.”

Today, I’m drawn to the gravestones of young mothers. I suppose it’s that part of me that remembers this truth: We’re all going to die. And none of us has any guarantees how long we’ll sail between the Launch and the Landing.

But If I were Anna Ahders Pexa, I’d have landed already.

It wasn’t enough to know the woman’s name and two dates. I had to know more about this woman who raised her sails and rode the seas between the Launch and the Landing.

So I went to the courthouse a few months back to find out more about Anna Ahders Pexa. I combed birth records, death records, marriage records and newspaper clippings that were saved to microfilm in my county-seat town.

And this is a bit of what I found: Anna Ahders was born in Inwood, Iowa. She’d attended country schools and lived on the family farm. She married Mike before she turned 20, and three years later, left for South Dakota where the couple farmed. Her husband once said she “bravely faced the privations of pioneer life.”

They had five children in all, and Anna’s mother had recently moved in. But the young mother had fallen ill, so she took a train alone to Rochester, Minnesota, for an X-ray. She died there of yellow jaundice four days later. Doctors said she also had an “internal cancer.”

“But in life we are in the midst of death,” the reporter wrote. “And Mr. Pexa grieves the more because she was called by death just when after years of pioneering and hardship they were getting comfortably fixed and in shape to take life with more ease.”

Our time at sea sometimes ends cruelly short, and when I look at the photo of Anna and re-read old news stories, my own mortality gnaws at my insides.

How am I living my dash?*

What does my heart beat for?

And do I leave a legacy that points to Christ while I navigate my own stormy seas?

To some, the thought is perhaps morbid — that I would scour cemeteries and 90-year-old archives for answers to life’s big questions.

But I find something I need here in the cemetery: I find a needed reminder that I’m pressing ever-closer to the Landing.

I used to be scared of the Landing, you know. I was afraid that the shore was The End. But that was before I came to know that The Landing was really just the beginning. That was before I knew that a calm and Crystal Sea waits on the other side of these waters.

For I know that each day, I’m writing my own eulogy. I’m not writing it on paper, but I’m etching it on history and hearts. What legacy — I ask myself — am I leaving today — number 13,870 of my life?

I want to be rich in love and slow to anger. I want to spread kindness and extend mercy. I want to make a mark on this life, not for my name’s sake but His. I want to leave a legacy of a Dash well-lived; I want to invest a life in love.

Today, I’m writing my own eulogy. And I want to write it well.

*The phrase “living your dash” comes from a poem originally written by Linda Ellis. 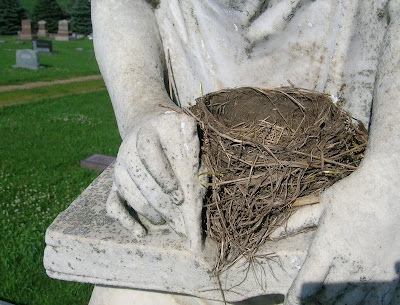