When You Need to Remember What You First Believed

But it’s seems really noisy in the world right now, like a lot of people can’t agree on a lot of things, and people are drawing lines and making boxes and picking sides and pointing fingers. And it’s not only the political arena. It’s happening in theological circles, too. And I know we can’t all agree on everything. That would make for a monochromatic, sterile world that lacks originality.

I celebrate differences. I believe we should voice them.

But sometimes, in the noisy spaces, I can lose sight of what I first believed.

I believe that being a Christian isn’t a thing we do only on Sundays, and that church isn’t something that just happens at the altar, and that grace abounds everywhere – sometimes where we least expect it.

I am a truth-seeker, a Bible-believer and a desperate grace-clinger.

I believe that even if people make fun of you – even if your own Christian community rolls its eyes at you – it’s still OK to be “on fire for Jesus,” to wear a Christian T-shirt, to call yourself a Jesus Freak and to raise your hands in church. And I also thinks it’s OK if you don’t.

I believe that every moment is an opportunity to spy grace, to offer love and to find a way to forgive. I believe all those things can happen anywhere: in funeral homes, in subway stations and in the sandbox at the park right after a mean kid throws sand in your toddler’s eye.

I also believe this: I am saved but still a sinner.

I believe in scandalous grace, and that the cross is the most priceless and costly gift the world has ever seen. I believe that it really is all because of Jesus.

I believe that Christ Jesus is more than a wise teacher, a fine philosopher or a miracle worker. I believe that He is God, the living Word, who became flesh. I believe He voluntarily atoned for my sin by dying on the cross. I believe He rose from the dead, ascended into Heaven and is seated at the right hand of God the Father.

I believe the Holy Spirit is a divine Person.

I believe that salvation is a work of God’s free grace and is not the result of human works, “being good” or taking part in religious ceremonies.

I believe that God exists, yes … And I also know that He does. I talked to Him a few moments ago.

Lost people matter to God, and they matter to me.

I believe in miracles. I am one.

I’m a mess. And because of that, I believe I will always need forgiveness, until the last light of this life fades.

I believe that Jesus Christ is coming again.

And I believe that this is not the end,
and that there is hope for all people,
and that Love came to rescue the weak and
the broken and
the helpless and …
me.

And I — sinner falling now at His feet — believe that I will live with Him forever. 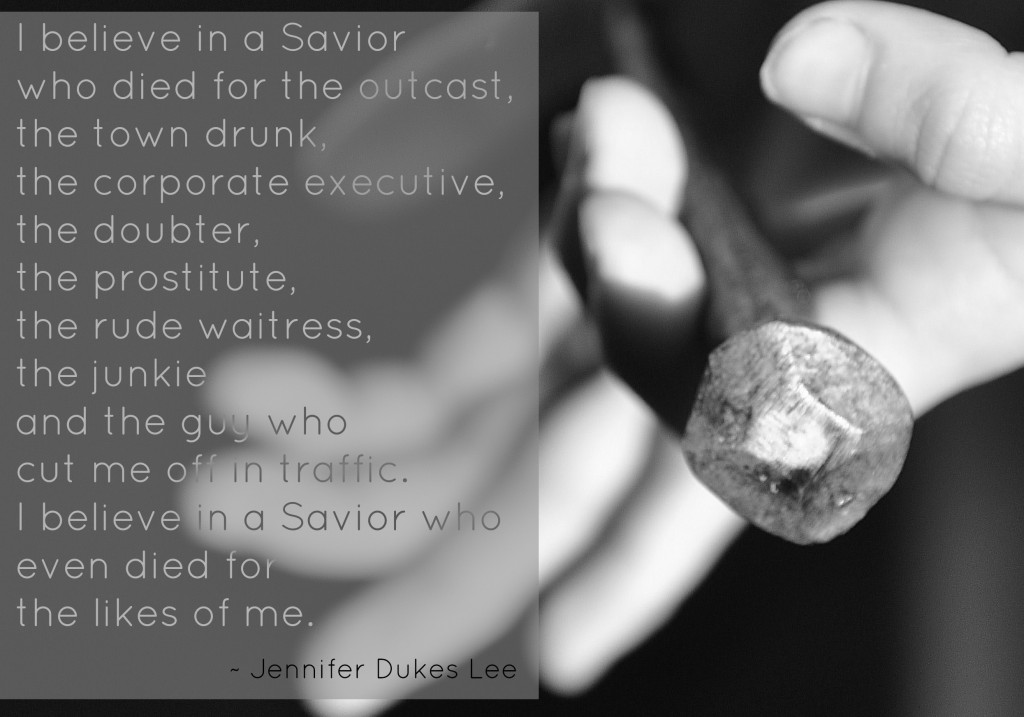 Friend, would you care to share your faith statement in the comment box? Or link to it, if you have it on your blog?