When You Need to Put the Handwriting Back on the Wall

So much about those days is fuzzy, but I still remember the groping around in my mind’s dark. All the color had been sucked out of life, which was a lie, but that’s the way it all looked. Just gray.

I didn’t get why. Healthy toddler, new baby, happy marriage, nice home. Who, but a spoiled brat, would be crying when she’s living the dream? What kind of mother and wife was I anyway?

They call this rock-bottom, I guess. Some people find it at the bottom of a bottle or when they slip their last dollar in a slot machine or when they wake up one morning and realize they messed up real bad. But this was where I scraped against my rock-bottom — while cutting a red apple for my daughter.

It was 10 p.m., and the baby was finally asleep. My two-year-old was still awake because I guess I’d forgotten that she had a set bedtime. I realized it too late, but I let her stay up longer for apples. I remember thinking at the time that I hadn’t done anything for her all day long, except cut up an apple for her. Which was a lie, but I couldn’t always tell the difference. I peeled away the skin because she didn’t like apples with skin, and I picked off the seeds.

I handed her apple slices on a plastic Dora plate, and I sat with her at her tea-party table. Folded into a child’s chair, I sobbed.

Because what kind of mother waits until 10 o’clock at night to do something nice for her child?

I had read about people like me in the pamphlets that the nurse gave me before my first baby was born. But none of it came true, and I was happy with the first baby — only and always happy. But it was different with the second, and I saw the words in the soft glow of the Internet: Post-partum depression.

They said on the computer that this was “normal.” Whatever normal was. But this didn’t feel normal — waiting until 10 at night to serve apples.

And, no, I wouldn’t ask for help. What kind of mother of two would ask for help, when mothers of four and five manage?

But my husband put a hand on my arm, pulled me close, and said I should. It was ok to ask for help, and I sobbed into his shoulder. Why, he asked, do I always want to do everything by myself?

So I called her the next day, a sister in Kansas City. Would she come? Would she drop everything — her life, her own kids — and drive six hours north to help me so I could do more than slice up a Red Delicious for my girl?

The first night she got here, she held my baby, who wouldn’t sleep. My sister didn’t sleep, so I could sleep.

Next day, I went to the doctor, who gave me some pills. I came home, and my sister had penned a note on white paper. I think  now that it was a God prescription. She handed it to me and said I needed to say these words every single day, or more as needed: “Lord, give me enough grace for today.”

She underlined today. And I began to pray those words every day.

I also went to my bedroom closet that day, and for the first time ever, dropped to me knees before the Lord. I remember leaning my head on the carpet in the dark, right beside the laundry hamper. And right there, I aired my dirty laundry to Jesus. I did most of the talking, and He didn’t seem to mind.

My sister says that on that day, I came out of the room a different woman. She said she didn’t know what happened in the room, behind that closed door, but she said I was a new person when I walked out.

Yesterday, I was cleaning the drawers in the kitchen. I found my sister’s note, under old catalogs, in the drawer by the oven.

I don’t take those pills anymore. I would if I needed to, but I stopped years ago. And for some reason, the day I stopped taking the pills, I tucked the note in the drawer.

But who would throw away the handwriting on the wall?

I took that note from under the pile, and today, I taped it to the pantry door. 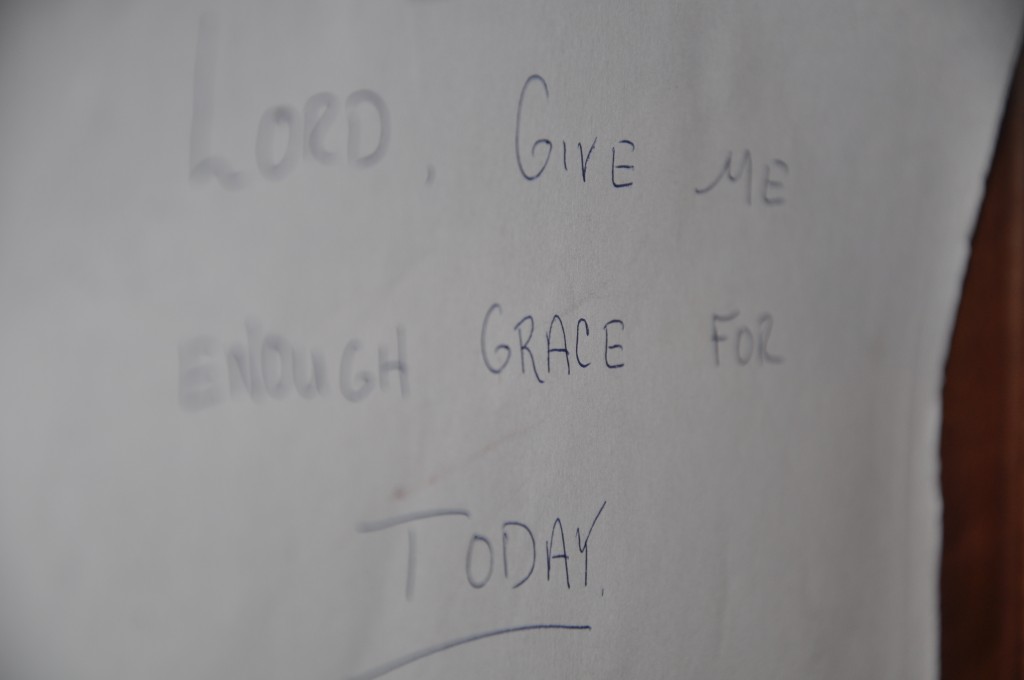 (I didn’t realize this — until I found that note in the drawer — but I have never shared this story here. Until now. His amazing grace still amazes me.)