When You Have to be Willing to Fall

She didn’t care if she won. She really only wanted to make it through without falling apart. 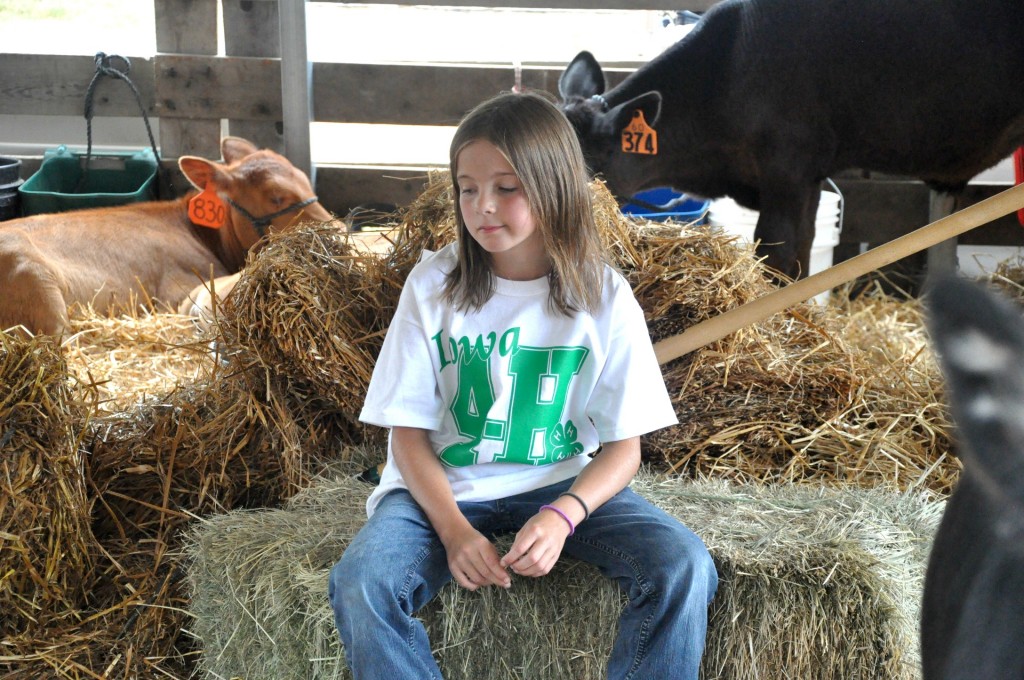 She was calculating failure there in the calf barn before she even stepped into the show ring.  She tried not to let her voice shake when she asked me the question:

“How many people will be in the bleachers?” We sat together, knee to knee, on hay bales. The day sweltered. Even in the shade, we were sweating.

She worried aloud that all those people and crying babies might spook her baby, Sherbert the Calf. But I was afraid they would spook my little girl, Lydia Lee. 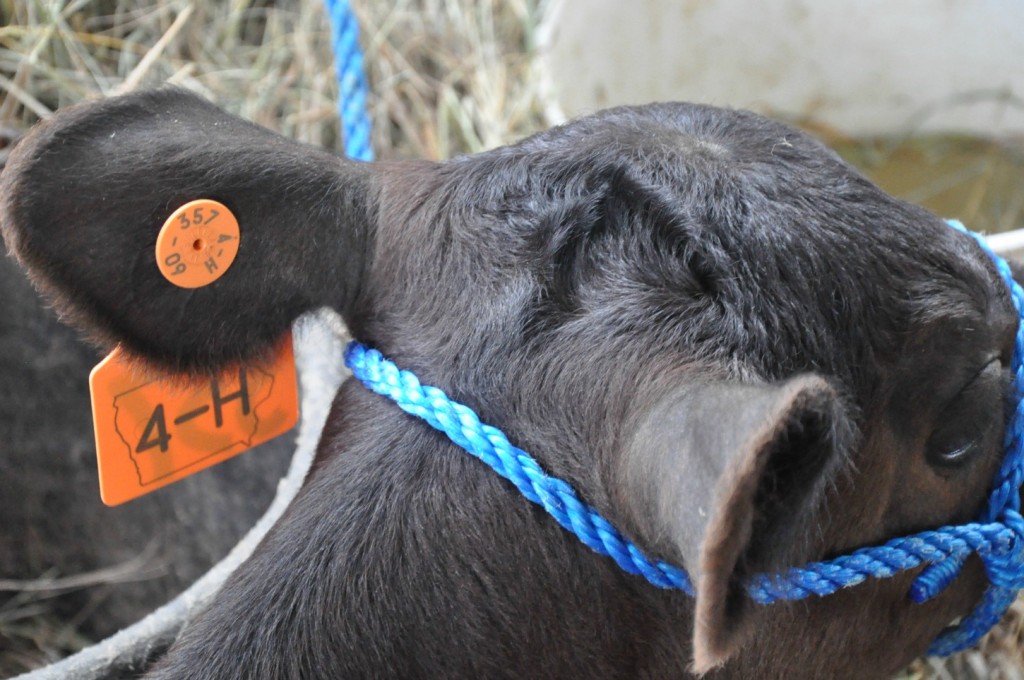 I did remind her that the calf show is for fun. I wore a smile to blunt her worry. She found it unconvincing. I held her hands in mine and told her how again how she would lead her calf around the pen with a rope-halter. She would answer a few questions from the judge.

“But what about the knot, Mom? What if I mess up the knot?”

Only a few minutes earlier, we’d found out that 4-H exhibitors were expected to tie their calves to a gate using a special knot. It was a complicated series of twists and loops of the rope, but Lydia picked it up quickly and confidently–then she practiced twenty more times to be sure.

She brushed her calf again and again, picking away bits of hay from the fur. And I watched, too, how she smoothed down her own hair over and over again — a nervous habit. 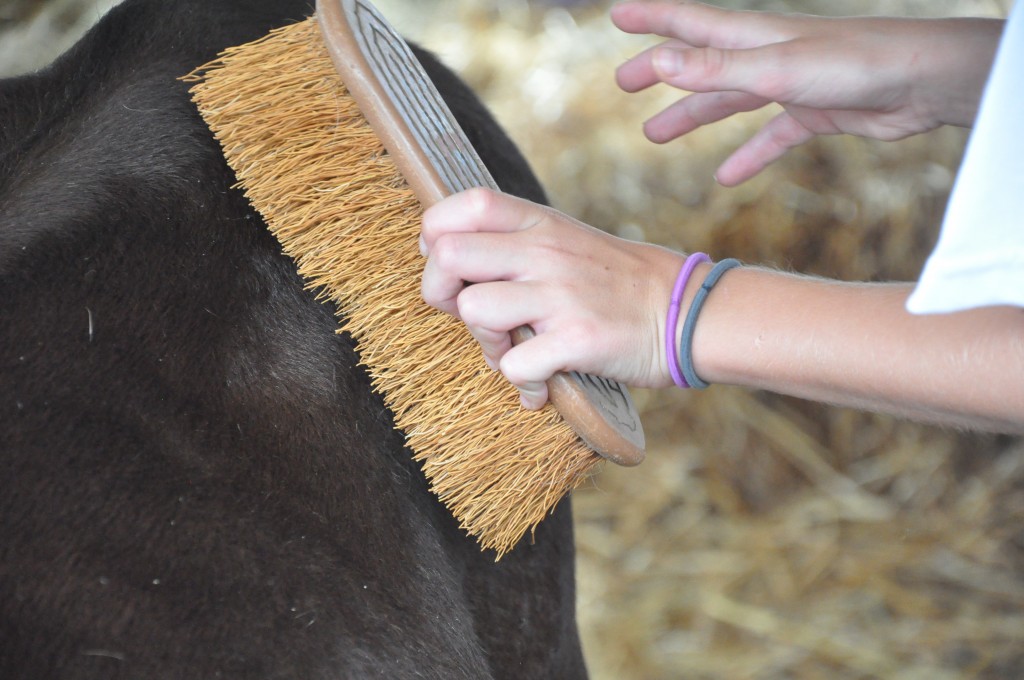 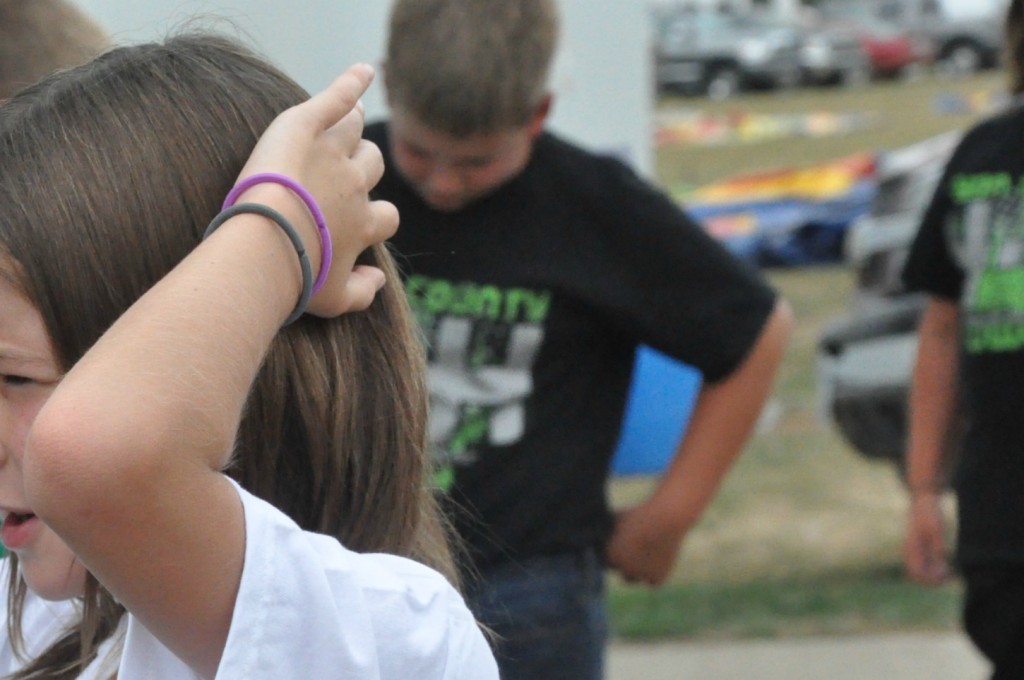 She had practiced, primped, preened and prepared. We’d almost forgotten to pray. I took her hands, and we asked God to get that fiesty Sherbert to behave. We prayed that Lydia would enjoy her moment in the ring.  We prayed for peace, over performance. We prayed that she would simply get through the thing, and to the thing … to have courage to walk into the ring.

That is no small thing, this matter of courage.

Lydia was not looking for a blue-ribbon at that point. She only wanted to maintain a bit of control. And she didn’t want to cry.

She is her mother’s daughter, afraid of falling flat on her face in front of a live audience. She feared worst-case scenarios before the show-gate even opened.

Jesus said this: “My strength is made perfect in weakness.”

Christ values our weakness, the opening place where he can enter with great power, so that there’s no question Who had the muscle to win the impossible battles of life.

But for some mortals, our own “strength” is our very weakness. The world rewards the winners, shuns the losers. We race for the win, the bigger paycheck, the corner office, the blue ribbon. We work hard, try hard, move fast, climb faster, get the win, bring home the bacon … then we expect even more the next go-around, climbing higher up a ladder for some elusive, invisible standard hovering always out of reach.

Upward mobility starts young in America. Falling isn’t an option in a world that values strength over weakness. Failure is downright ruinous — even in places like soccer fields and gymnasiums.

So, some people don’t even enter the ring or the ballfield or the pulpit or the college classroom. Instead of trying, many people back out entirely. Because if they can’t win — if they can’t be perfect — they simply won’t go to the thing, denying themselves the joy of finding out they might have gotten through the thing. If they’d only tried. If they’d only opened up the weak place for the Savior to make His grand entrance.

When we duck out, we miss the joy of life’s experiences, because we’re sidetracked by the anticipated “value” of our spotlighted performance. We don’t want to fail when people are watching.

I remember how a friend once dared me, before speaking to a group, to pray this one prayer: “Dear God, let my words and my life honor you. I’m willing to fall flat on my face, if it brings glory to you.”

Trust me, that’s a very hard prayer to pray. But it’s a prayer that changed everything. Isn’t that the surest way to bring Him glory? To be willing to fail? To lay out your weaknesses to a world in need of knowing that people actually. have. weaknesses? To demand less “performing” from one another? And to give more grace to one another?

I want to live this: to never let the worth of my life be measured by my human performance, but by a Savior’s performance.

The sun slants in through this open-air barn. The calves bellow, shifting position to find shade.

Lydia leans down by Sherbert, whispering like she might be able to sweet-talk her calf into behaving in the show-ring. Lydia — exactly one quarter the size of her calf — will need to grip that rope hard. She’s need strength in weakness. 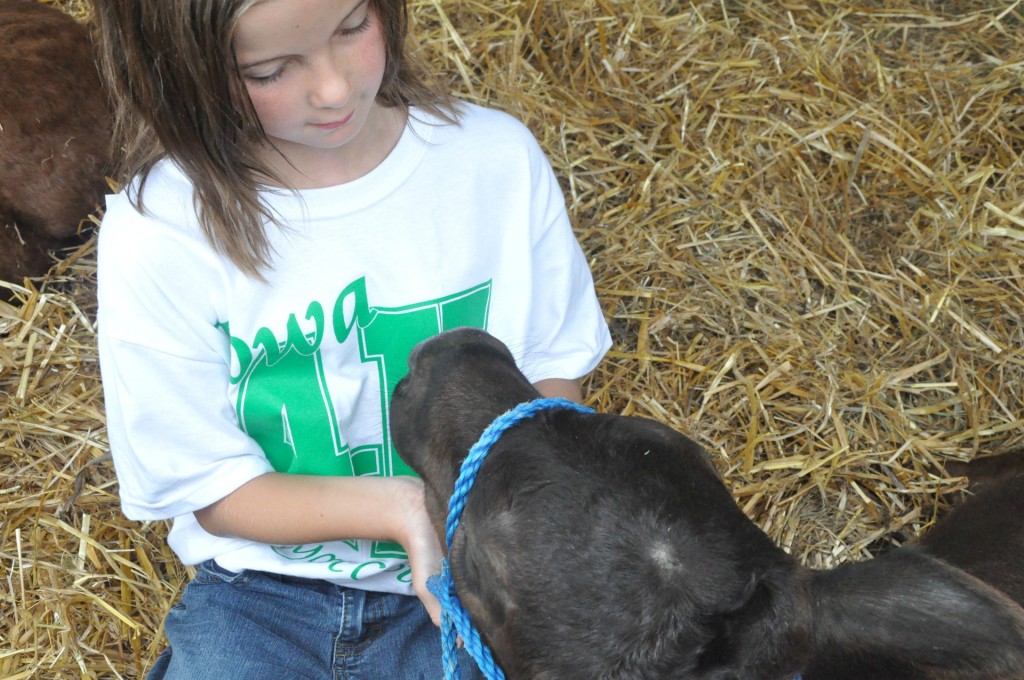 I can see it in her eyes, how she’s feeling weak.

An announcer calls for all fourth graders to bring their calves to the show ring. This is a moment of fight or flight for Lydia Lee. She unties her calf, and her Dad helps her escort Sherbert to the ring. She holds tight to the rope. 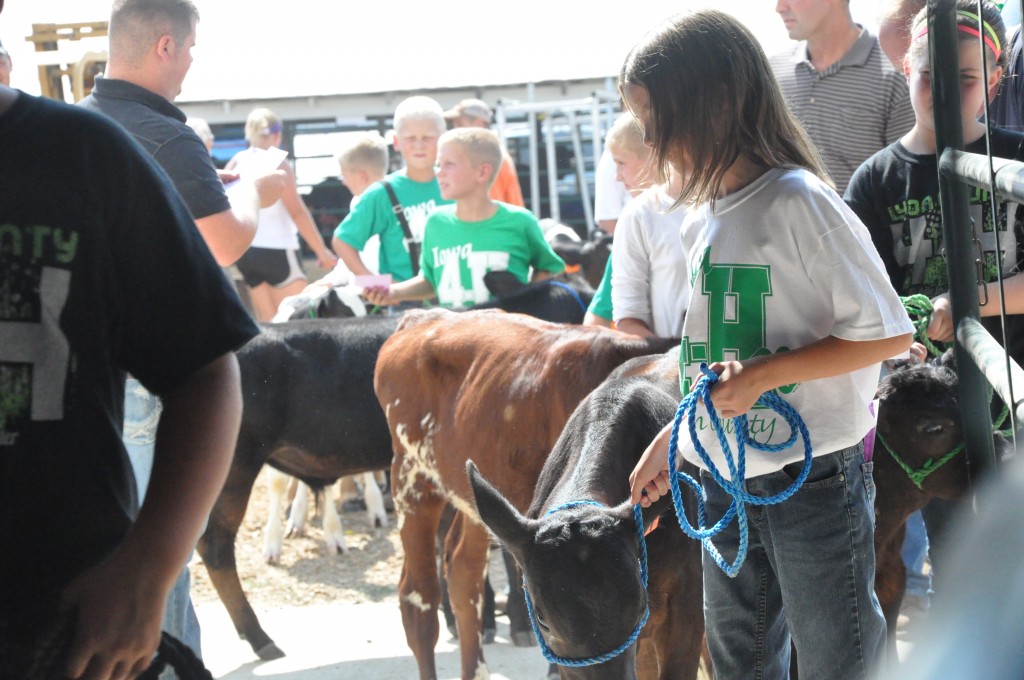 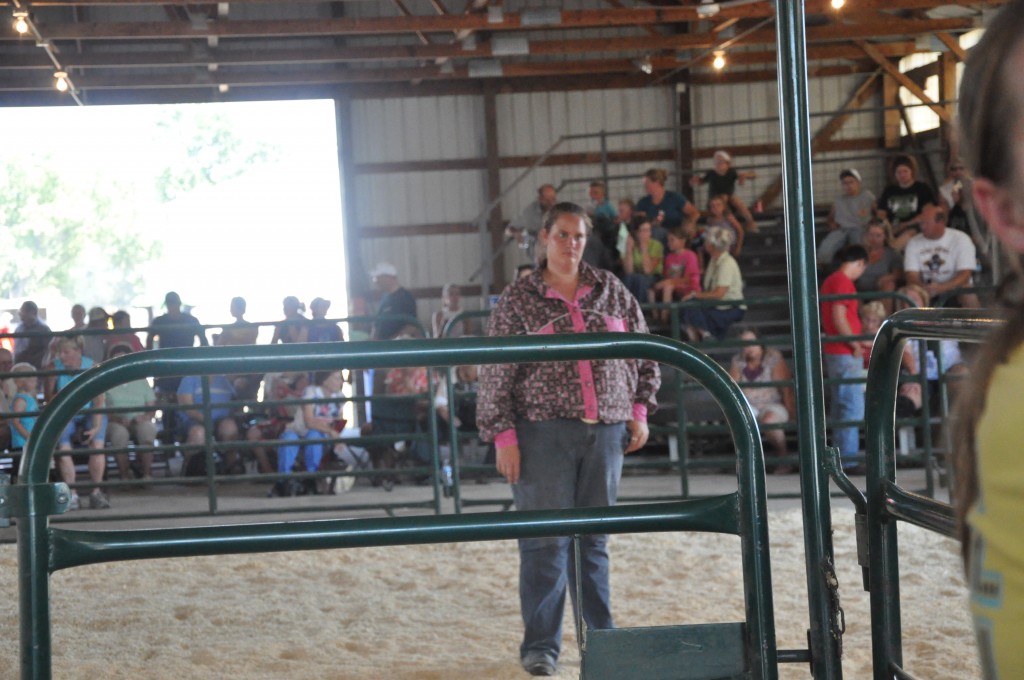 A judge stands in the middle, in a wide stance with her hands on her hips.

And I stand behind a little girl with number 122 pinned to her back. 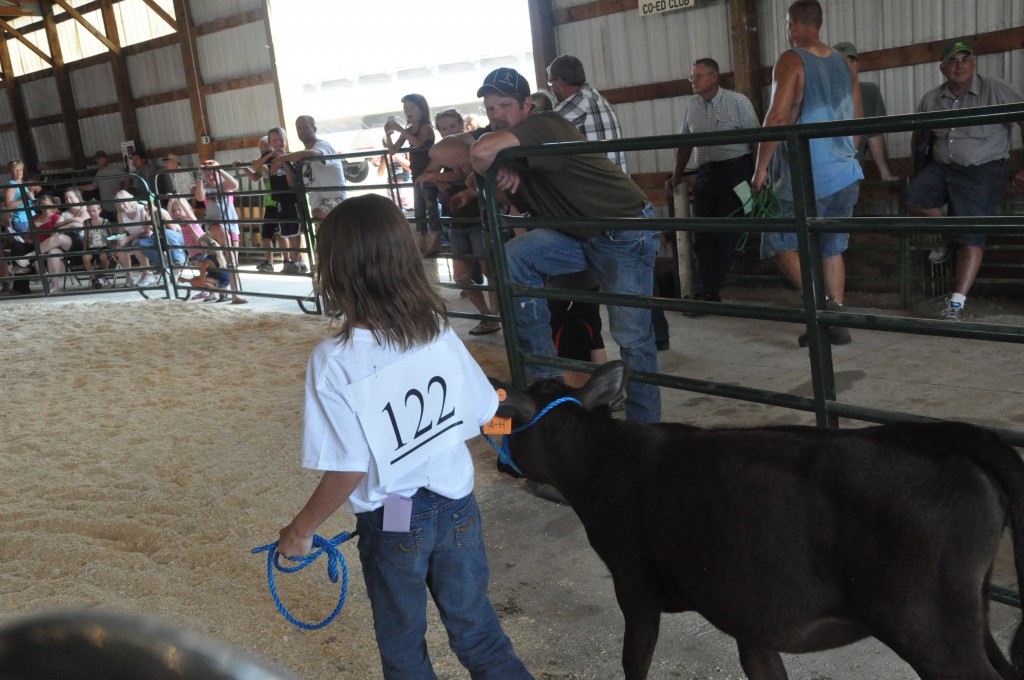 I keep looking at her back, and how she’s grown up tall, with that hair flowing down past her neck and all that courage in those hands gripping a blue rope. She’s my firstborn, and here she is: showing me what it means to be brave, and to walk straight into her worst fear, one single step at a time, because she doesn’t want to miss the experience.

She enters the ring, and makes the first pass around. The judge asks each child, one by one, to tie their calves to the gate. It’s Lydia’s turn, and I can see through the gate that her hands are shaking. 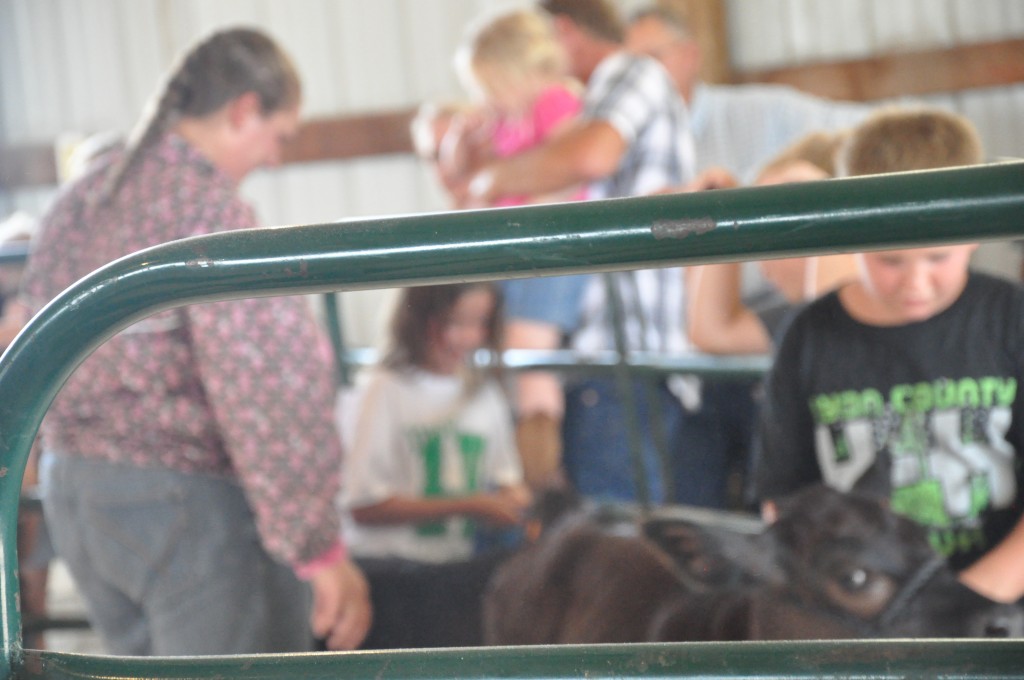 The judge is telling her something. I can see a crestfallen look cross over Lydia’s flushed face.

The judge moves on, and Lydia mouths the words to me across the ring: “I did the knot wrong.”

Suddenly, Sherbert bucks and backs away from the gate. Lydia has to turn her calf twice, and then it happens: She falls on the ground. Lydia falls, right there in the show ring in a room full of people watching.

I watch her, stunned. I want to rescue my girl, want to run into the ring and pick her up and dust her off, and help her out of the ring. But I don’t. I stand still. Because it’s not my place to be her strength in this moment of weakness. I hold my breath.

And just then, Lydia stands. She doesn’t let go of Sherbert. She stands. Brushes herself off. And moves back to her spot. She throws her shoulders back, lifts her chin up and stands tall — made impossibly strong in the fall.

A few moments later, the judge whispers her decisions to the announcer. She will award 18  ribbons, along with one champion and one reserve champion.

They call a boy’s name, and he gets a purple ribbon. He is the champion of the fourth-grade calf show. The crowd applauds. The boy beams.

And then, they call out another name. There’s another champion in a circle of winners who went to it, and through it, and who stayed in the ring. The announcer calls out the name of a girl who prepared and who prayed and who  feared the worst. She called the name of the girl who fell.

“Our reserve champion this afternoon … is Lydia Lee.” 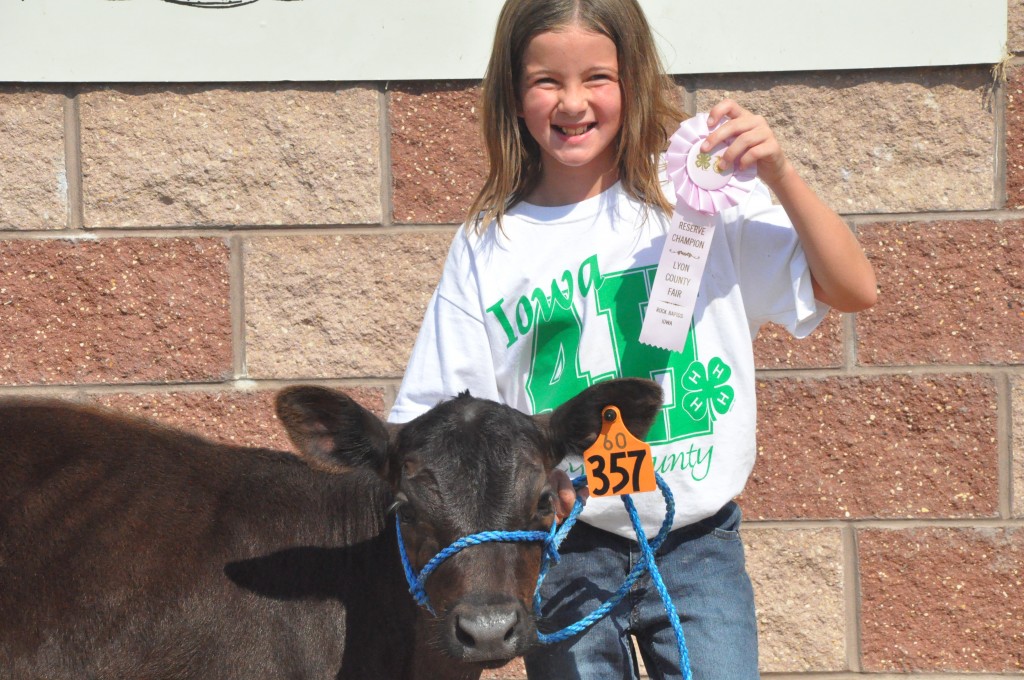 We write in community every Wednesday about the God-Things that make you go, “Hmmm…”

Some call them coincidences. We call them God-incidences. And those goosebumps you get sometimes when you know the Holy Spirit is at work? Yep. They’re God-Bumps.

Want to join the chorus of words for our God? Pick either button above, attach it to your post, tell your story. Then, link up below.