What We Need to Know When We Feel Lost and Alone

It was a hot day in August at a carnival. The air was frothy with dust, laughter and the dinging of bells. I was four years old, wearing a seersucker halter dress and pigtails, moving through a swarm of legs that seemed all welded together.

At one point, I had been holding my mother’s hand, but we came apart somehow. All around me were legs, thick and long.

I twisted a pigtail nervously around my finger, and when I realized I was lost, my heart pounded hard against my chest.

There were people everywhere, smelling like salty popcorn and filled with exuberant joy, but I felt alone and disconnected. Tears carved a small path through the dirt on my cheeks. It was maybe only one minute before Mom found me, but it felt like one minute of forever.

I remembered that moment the other night when a friend and I were talking about how hard it is when we feel unseen, unnoticed and completely lost. We can be standing in the middle of a hundred people — all of them bubbling with laughter — but no one really knows that you are there. You wonder, even, if God sees you. It feels like the whole world has moved on, in one joyous party with Jesus, and you’re left in the rubble of your own hurts.

I’ve talked to people, clouded by grief, who feel that way, hidden away from sight. After the last bit of dirt is shoveled over the grave, the world seemingly moves on with carefree ease. That isn’t necessarily true, but it’s the way it feels when most everyone returns to their jobs, their dinner parties, their committee meetings, their next vacation. And you? You’re frozen in grief, feeling terribly alone.

You’re a shadow on the wall, a whisper, a thread of a person.

But listen. Hear God break the silence with a whisper: “I see you.”

There is no dark too dark for the Lord to un-hide you. No place where He can’t find you. No sea so thick that He won’t part it to reach you. No water so raging that He won’t walk on it to get to you. 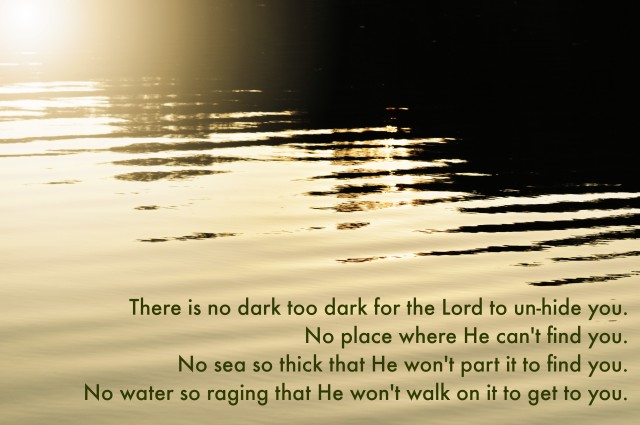 When I sink into the lonely places, I turn to Psalm 139, where God reminds me that no matter where I go, He’s already there. He hasn’t left for me for someone else’s party. There’s enough of Him to go around.

“Is there anyplace I can go to avoid your Spirit?
to be out of your sigh?
If I climb to the sky, you’re there!
If I go underground,
you’re there!
If I flew on morning’s wings to the far western horizon,
You’d find me in a minute —
you’re already there waiting!

The very first question that God asks in all of Scripture is this: “Where are you?”

He already knows the answer. It seems to me that He’s asking us the question, not so much to get an answer, but mostly to let us know that He is near. That we really aren’t alone after all. That we can come out from our hiding places and our lost places, and into the presence of our Savior.

Look, there, on the water, He’s coming for you today. 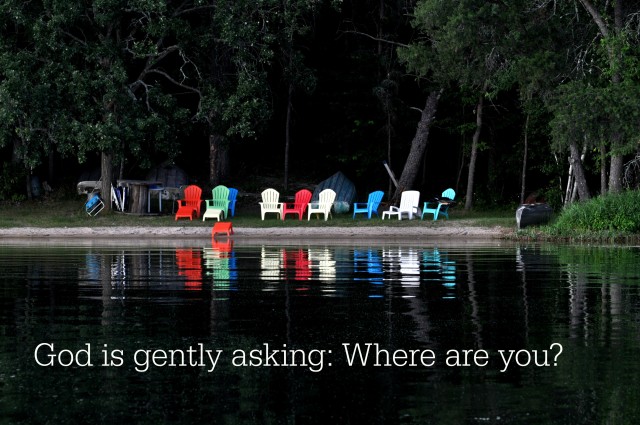 A quiet question for you, friend: Where are you?