I’m a visual person.
In cookbooks, I tend to choose recipes where a photo shows the desired end-result. In memoirs, I love to see photos of the people described within.

But the trouble with such pre-set images is that our own imaginations sit idle. We are left with visual expectations of what should be, rather than what could be.

That goes for God, too.

Tell me: When you think of God, what do you “see”?

Anna, 4, shared with me yesterday that she knows what God looks likes.

Lydia added: “And He has a long white beard and laughs a lot.”

Together, the girls’ description conjured up images of Santa Claus in a fluffy white robe. Even the children — rich with imagination — resort to familiar images to describe the indesribable. 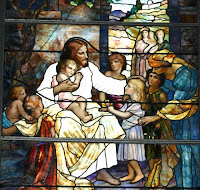 Even today, at age 37, when I pray, I can’t shake the image of Jesus in the stained-glass window at my hometown church. That Jesus was both rugged and gentle – like a hippie who spent the day at the spa — with His wavy brown hair, flowing robe and skin far too white to accurately depict a Jewish rabbi from Nazareth. (I’ve even seen a blonde, Swedish-style Jesus in stained glass windows.)
Last year, I was intrigued by William P. Young’s characterization of the Holy Trinity in The Shack. In the book, God the Father is a black woman, Jesus is a Middle Eastern laborer and the Holy Spirit is a whimsical Asian woman – an outside-of-the-box treatment that shook my own mental expectations of God’s appearance.

I have also been deeply moved by the image of Jesus shared by my friend Janelle. When praying for my father-in-law, Janelle said she imagined Jesus sitting cross-legged on the edge of Paul’s hospital bed — just like He was one of the family, which He is.

As for God the Father, His appearance is unlike anything I could describe or imagine, though in worship, I tend to visualize the scene in Isaiah 6. Yet, Scripture tells us that even though we are made in God’s image, we are incapable of seeing God in all His glory.

So, tell me: What do you “see” when you think of God? What does Jesus look like to you?