Most of us found out about Bob’s death on Facebook, in a two-sentence obituary posted by his two-legged caregiver:

“So glad old Bob the Steer is home again – in the freezer,” the owner wrote. “Anyone want his heart or liver?”

(Someone chimed in that they’d bring the fava beans and Chianti.)

Bob was a benevolent bovine, in the fullest sense of the word. He would affectionately bat his long eyelashes at you, and then you’d swallow hard, knowing that this cud-chewing grazer was eventually going to simmer in your crockpot.

When my daughters found out about Bob’s scheduled demise, the oldest one chimed: “Awwww …. Bob’s going to be steak now? He was so nice, and he’s definitely going to Heaven because he donated his body to the dinner plate.”

I grimaced, not because of the graphic nature of this transition from field to freezer — but because my daughter was headed down the road of works-based theology: that one can earn his or her way to Heaven. Then again, she was only eight, so I avoided a theological treatise on grace. I digress.

The last time I saw him was late last fall before they loaded him onto the trailer. We had gone over to visit the animals — the cow, the horse, the pheasants and the exotic chickens. The clucking birds wore feathery plumes atop their heads — like floppy church-lady hats that swayed color with each jerking strut. The church ladies paced a bedside vigil, clucking Taps like they knew: It won’t be long. It won’t be long.

A few weeks later, the butcher separated Bob into those white-paper packages that drop like boulders to the bottom of your freezer.

I hadn’t thought about Bob for quite a while, until I read the much-more-refined thoughts on food written by the much-more-reverent Wendell Berry. Berry, a farmer-author, writes of the advantages people have in knowing where their food comes from:

“The knowledge of the good health of the garden relieves and frees and comforts the eater. The same goes for eating meat. The thought of the good pasture and of the calf contentedly grazing flavors the steak. Some, I know, will think of it as bloodthirsty or worse to eat a fellow creature you have known all its life. On the contrary, I think it means that you eat with understanding and with gratitude.”

— Wendell Berry, The Pleasure of Eating

This morning, I called Bob’s human family, to ask a few questions.

He was a sweet steer — Angie recalled — cream-colored with the curliest lashes. He’d sleep with the cats, who cuddled in close, sometimes too close, in that they would meet death prematurely.

Angie and her husband, Randy, even sent a few photos of their old friend Bob: 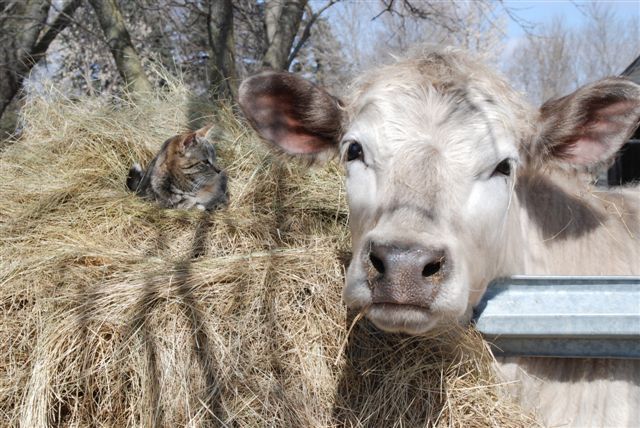 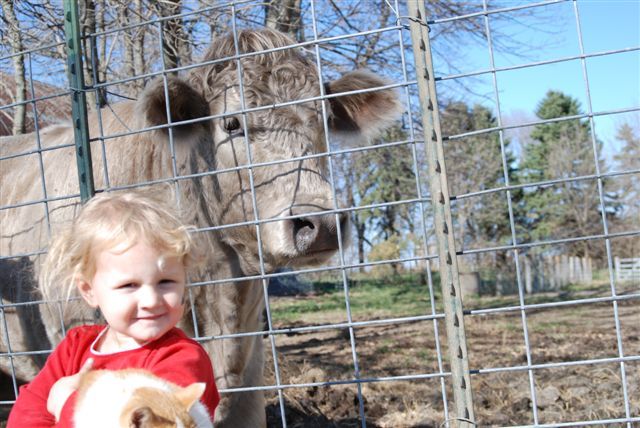 It was before Thanksgiving when Bob left the farm.

And the next time I saw Bob, I was with the caregivers’ sister-in-law at the meat-locker. A coveralled butcher pulled cardboard boxes from the walk-in freezer. And there was Bob — God, rest his soul — separated into white-paper packages stamped with words: “T-bone. Beef roast. Hamburger.”

I gulped. Part of me thought: “Maybe it would just be easier to pick up the anonymous meat on display behind the glass case at the grocery store. Do I really want to get this close to my food?”

But Angie says that Wendell Berry is right. She and her family eat beef with greater appreciation because they knew the animal first. They know what he was fed, and how he was treated, and they know he’s all-natural. No additives or preservatives.

She said, however, that next time they bring home a steer, he shall remain nameless. It’s just easier that way.


“In this pleasure we experience and celebrate our dependence and our gratitude, for we are living from mystery, from creatures we did not make and powers we cannot comprehend.”
— Wendell Berry 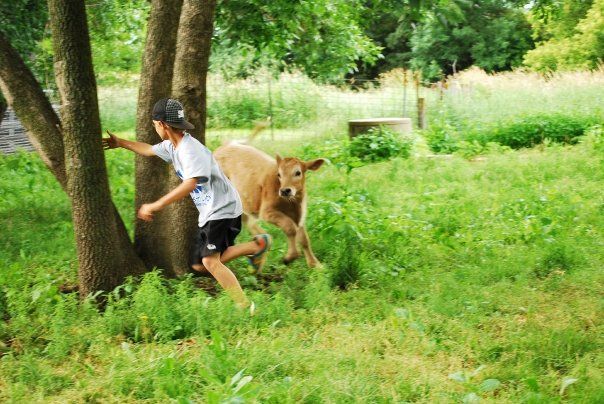 Photos contributed by Bob’s family, who live just up the road. Thank you, Randy and Angie!

This post is submitted as part of the book club discussion on The Spirit of Food: 34 Writers on Feasting and Fasting Toward God. Laura Boggess is leading the discussion over at The High Calling each Monday. Even if you haven’t read the book, you’re welcome to participate. Feel free to join us there.