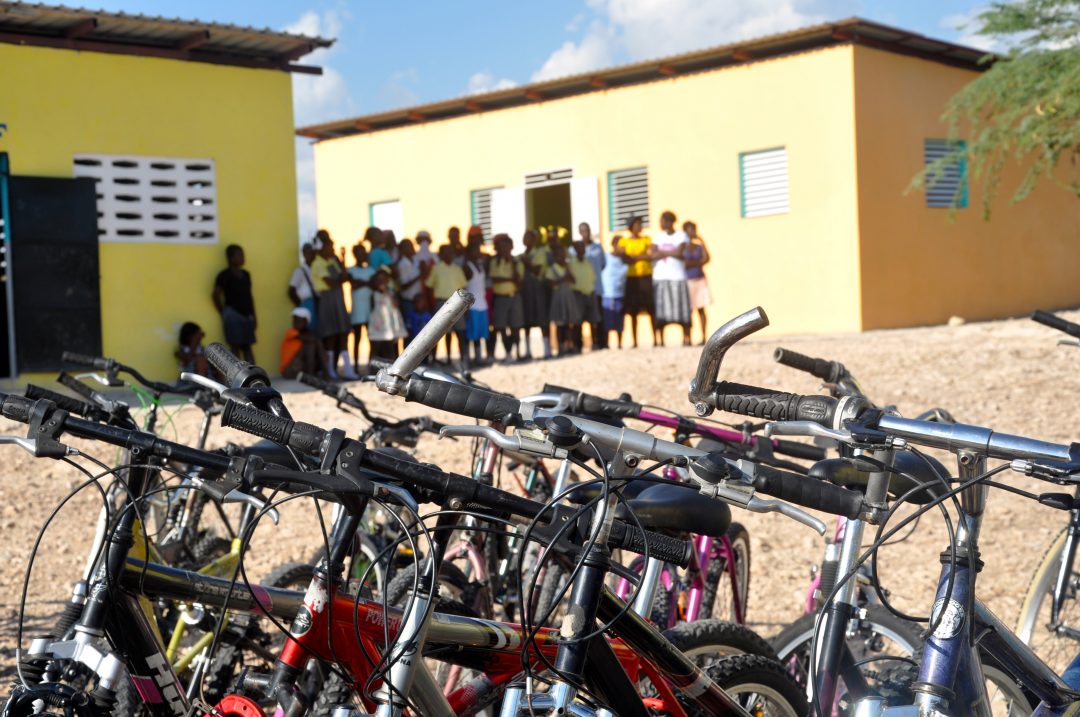 This story begins on long stretch of highway in July, somewhere in northwest Iowa, when bicyclists stuffed sweaty dollar bills into a huge jar, in exchange for bottles of water.

A half-dozen children held up signs on a route where thousands of bicyclists rode across the state of Iowa: “Water Freewill! Every dollar will be used to buy bikes for kids in Haiti.”

Those kids had a dream — to raise enough money to buy eighty bicycles for children in Haiti, who had to walk up to two miles every day to get to school.

The little dreamers didn’t have a slick marketing campaign. Nor a savvy business plan.

But they had a long table on a long stretch of road, a big jar, some poster board signs, coolers full of bottled water, … and a gospel truth that had begun to take root in their young hearts. 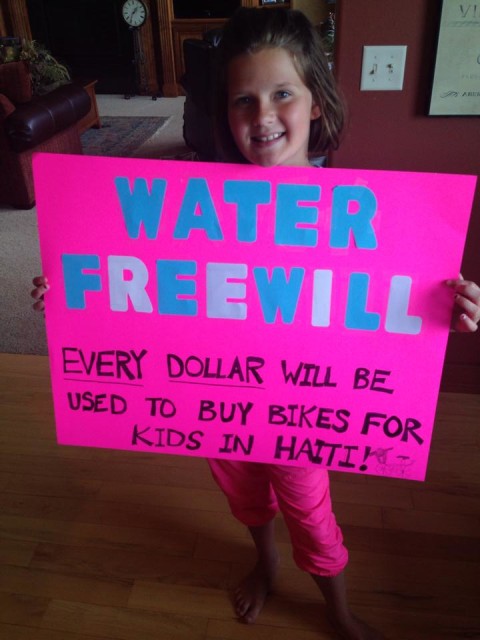 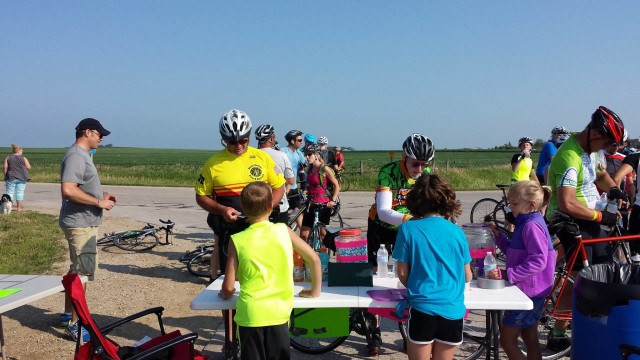 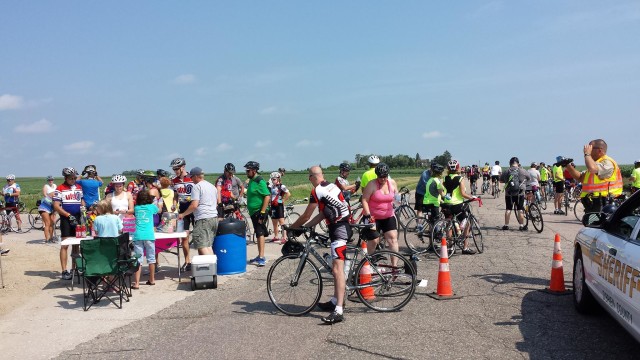 Over the months, those children sold dozens of jars of homemade jam, and homemade potato salad. There were dinners held, and items auctioned. And those kids prayed eye-squeezed-shut-tight prayers for months at nighttime tuck-ins.

Then one day, they all counted up the money. And it was all there. Every last penny. There was enough to buy the 80 bikes — and then some.

They learned right then that being available for God isn’t about your size, or your savvy, or your slickness, or your skill set. It really is all about your Savior.

When God calls you to do something, in His name, you can count on Him to see you through, in His power.

And those kids wanted to see just how much. They dared God to see it through. Which He did.

So the children and their parents headed to Haiti over Thanksgiving. Because they knew that on Thanksgiving, there was an even better way to celebrate that day than to be thankful for God’s gifts. They wanted to give good gifts. They didn’t want to merely give thanks; they wanted to live thanks. They knew that they had been blessed beyond illogical reason, and they knew what the Good Book said about living the best thanks: that it was better to give than to receive.

The God-sized dream was coming to true, and it was in full color now — with spokes and wheels and handlebars, and Hello Kitty bike seats, and palm trees waving in the background of a Port-au-Prince marketplace. 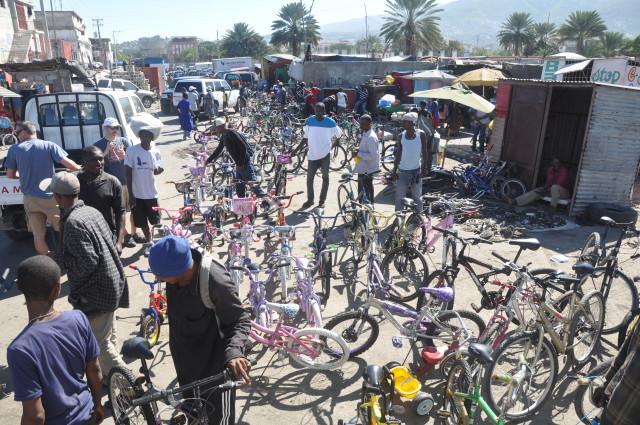 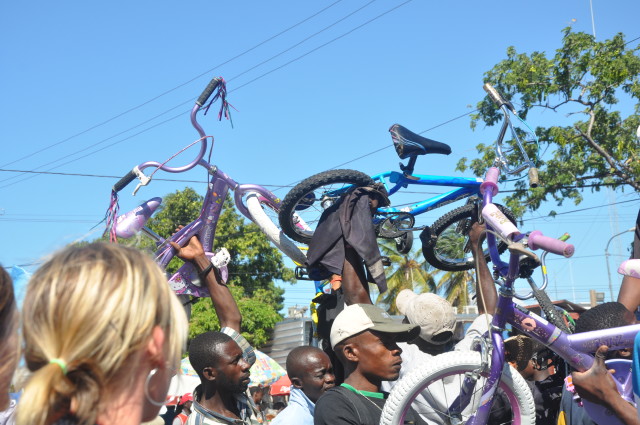 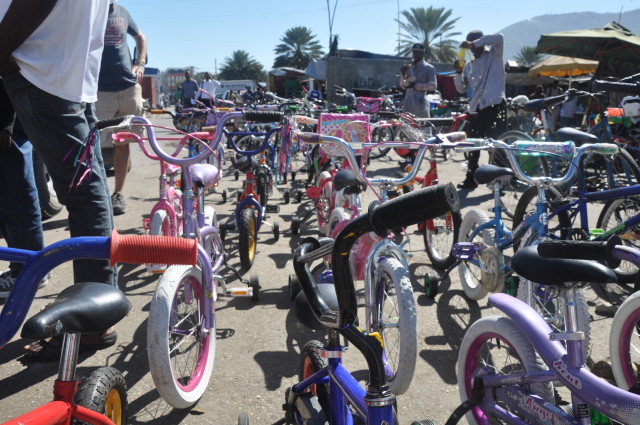 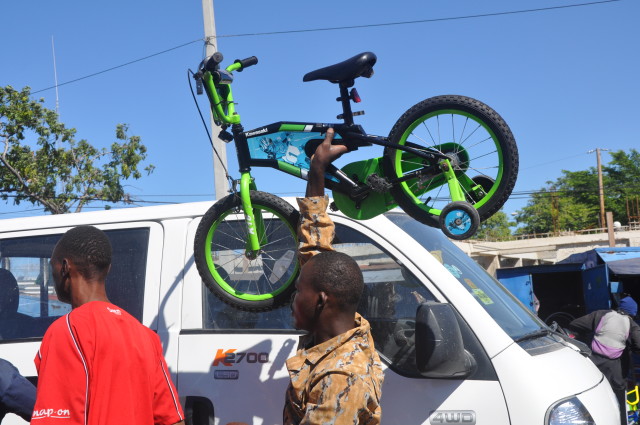 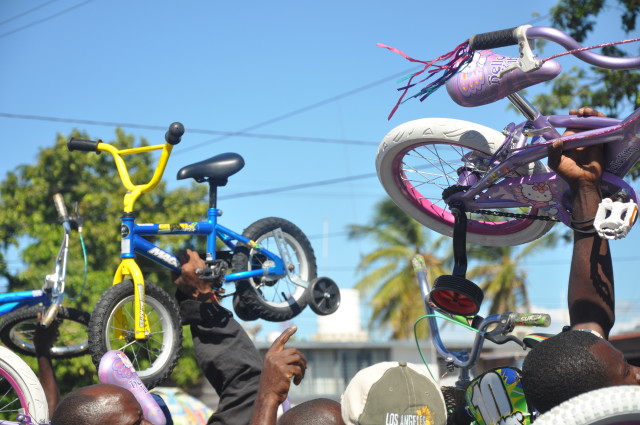 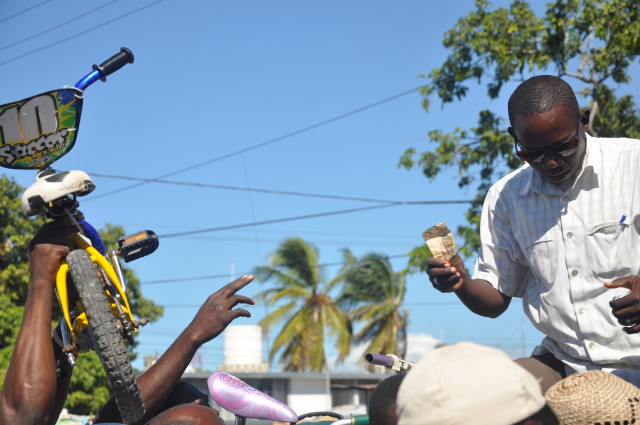 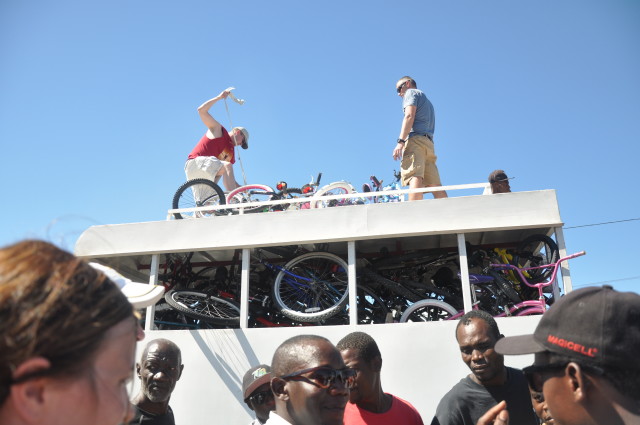 The dads strapped the bikes to the top of the truck, and they stuffed as many bikes as they could inside — a tangle of handlebars and spokes. And then they drove the bumpy roads down to the school, where the children were waiting.

It was now Black Friday, one of the busiest shopping days of the year in the USA.

In the schoolyard, I held the camera to my eye in Haiti, and snapped frame after frame. I thought about the lines outside of big-box stores back home, where people were looking for the next great bargain, and something shiny to put on the TV stand, or something shimmery to hang in the closet.

And here stood rows of children — who woke up that morning with dirt under their feet and tin over their heads and nothing in their bellies.  But they didn’t push or shove or clamor or fight.

They stood still and waited their turns … before they took the first ride of their lives. 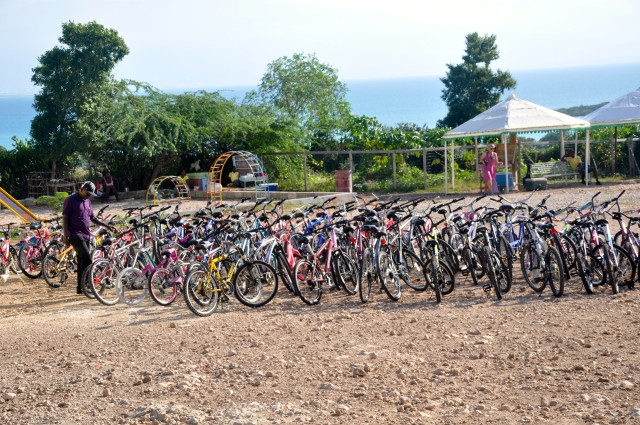 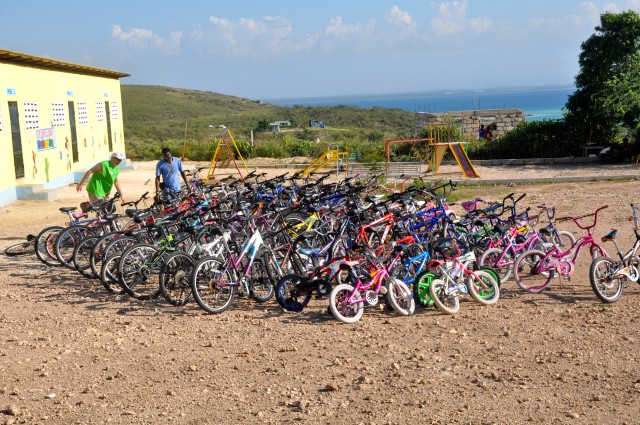 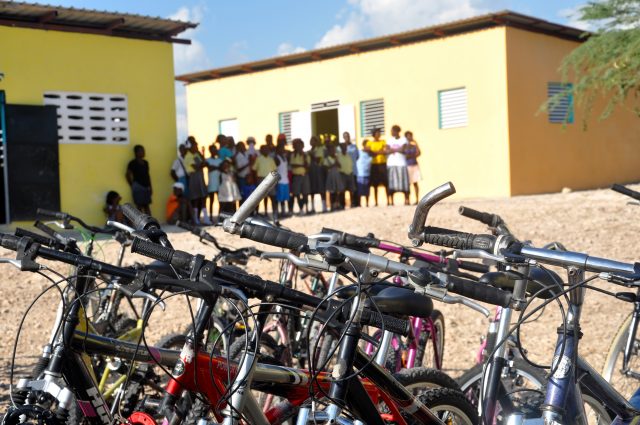 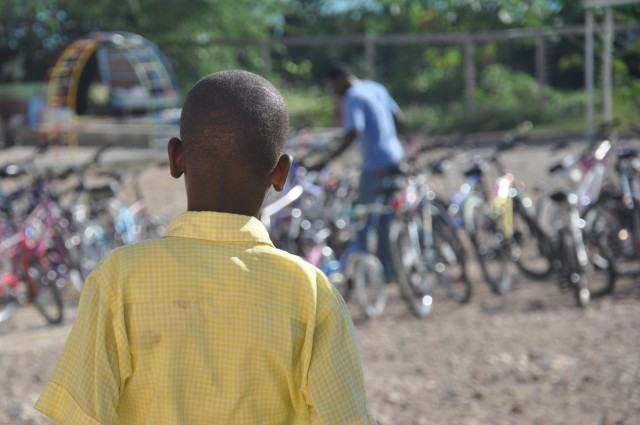 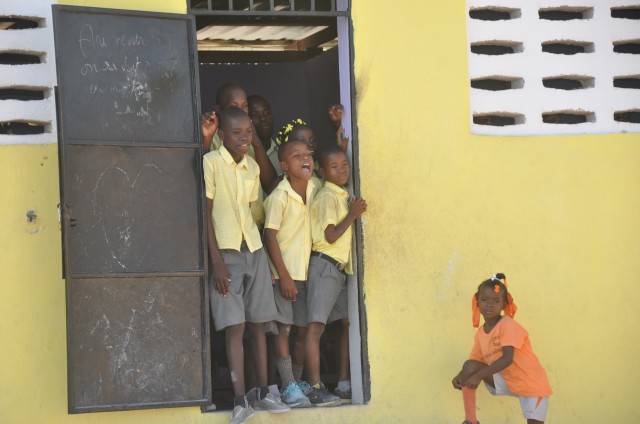 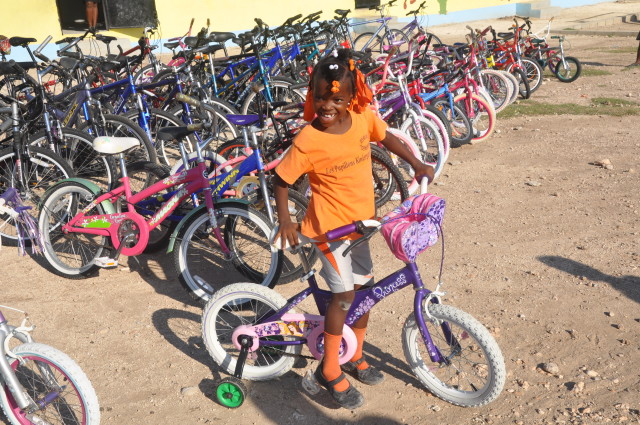 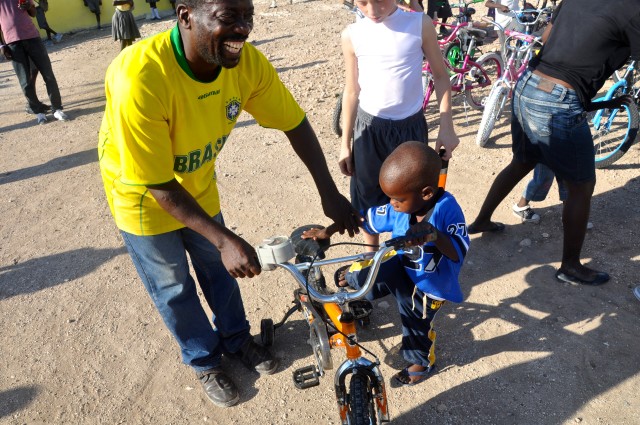 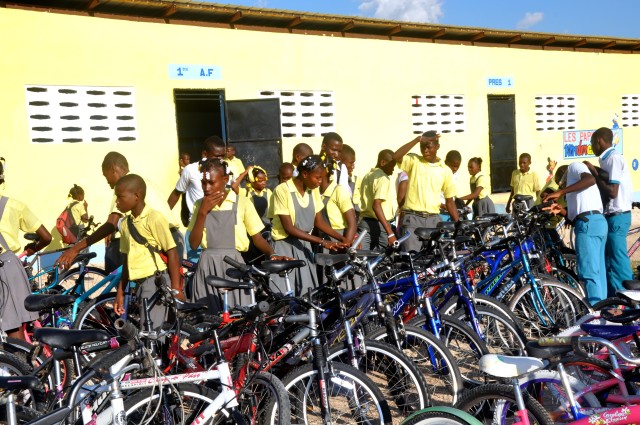 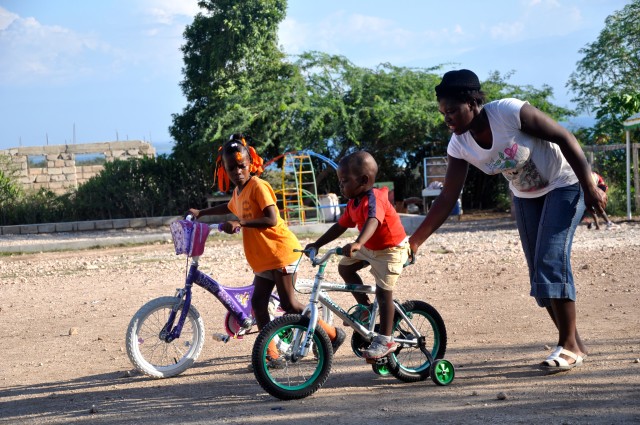 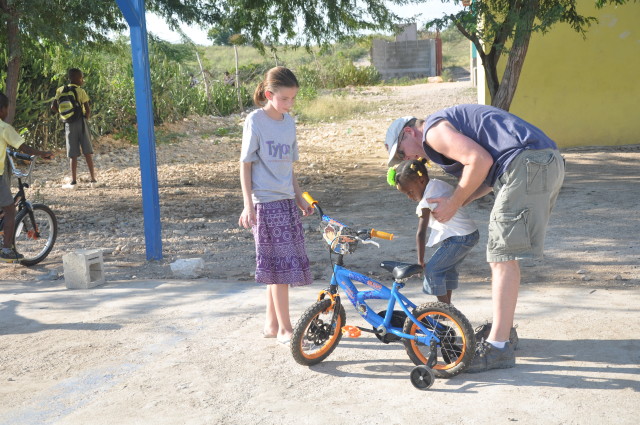 And I watched it all through teary eyes, how the gospel had taken root in the lives of a half-dozen children.

Those kids, they’ve been riding on the training wheels of their faith, because they’re still at the beginning of their stories, but it was like God took off those training wheels, and sent them down the road and said. “Go, now! You can do this!” And He’s saying the same thing to all of us: “This is the ride of your life! Pedal as hard as you can! Take your hands off the handlebars, just for the fun of it! Let the wind whip through your hair! And ride like mad!”

We get one pass here on earth. Just one. And yes, we are called to give thanks. But we are also called to live it.

Our faith doesn’t stop in a Book. We all go through the Book to meet Him, and we all come out on the other side of the Book to serve Him. I don’t mean to say that our six children are heroes or little Saviors. I mean only to say that God’s call to each of us is clear: Give. Live the Season. Let God demonstrate His power in the wild ideas He puts in your head. Look to Jesus to see what it means to do the unthinkable, the unimaginable, the sacrificial.

Jesus forfeited the comfort of Heaven, to live among us, and to give His life for us, and to teach us what it means to spend our lives well, in His name. The Bible doesn’t say that we have to do good deeds to work our way to Heaven. It doesn’t say we have to travel to faraway lands to do His work in the world. But Scripture does say that when we give in His name, that’s a sign that He’s at work in us.

Wherever we go to meet needs, we end up meeting God.

We met God under a blonde sun, under a hard-blue sky, out where the wild laughter of a hundred children rose up to the sky, to make a sacred chorus of praise.

We are deeply grateful to the many people who donated time, food, money, prayers and other resources to the kids’ six-month-long fundraising effort. Thank you to the riders of RAGBRAI who kicked this fundraising effort off in a remarkable way. Our children have learned once again that you don’t have to be “big” to dream big for God. We couldn’t have lived this story, were it not for the hundreds of people who contributed to an effort that brought 105 sets of wheels to some ridiculously happy children in Haiti.

(The families of Dan and Dana Dunn; Marc and Jenn Jenson; and Scott and Jennifer Lee)