The Shortest Distance Between Friends (A Dispatch from Haiti)

She marched through the rickety gate, down the stony path, past the grunting pig that was tied to a crooked tree, and up a litter-strewn walkway to find the little girl she had traveled hundreds of miles to wrap her arms around.

I walked a few feet behind our second-born daughter, and she never once looked back to see if her mama was coming. For she knew where she was headed, and she knew why she had come, and no one needed to show her how to love somebody today – not even her mother. She hefted that hope-filled canvas bag over her shoulder and marched forward, led by a singular purpose. 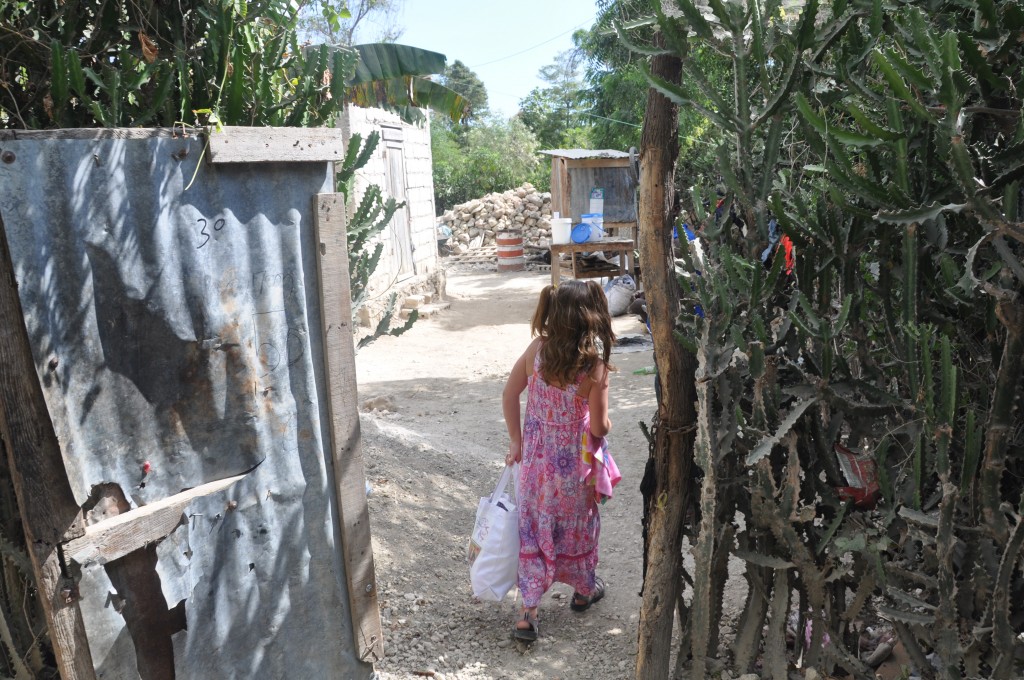 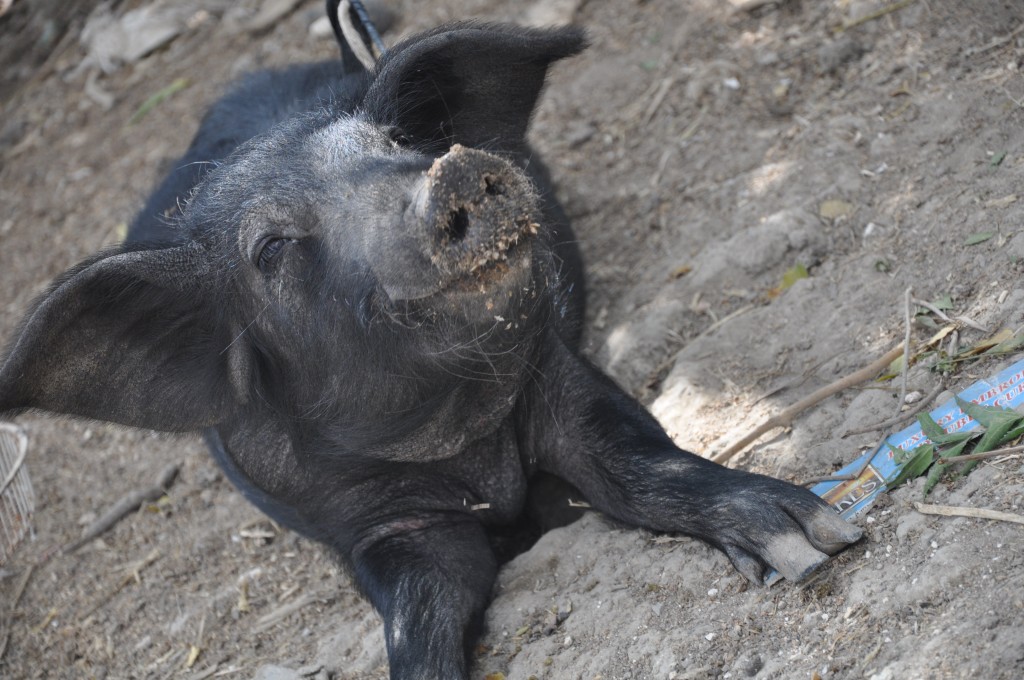 Months ago, Anna and I had sat one night in the glow of the computer screen on our Iowa farm. We studied dozens of photographs of children needing sponsors at the Touch of Hope school in Simonette.

We scrolled the mouse. And scrolled.

How does a person make such a decision: In whom do we invest, in a sea of real faces, every single one of them in need? How do we make our drop in the ocean count? Sure, we had prayed beforehand, that God would lead Anna to find the girl who was the right match for her.

But she and I both knew every single child deserved a sponsor. Yet on this night, Anna could only pick one? It felt like the most important click of a mouse that we might ever make.

“Mom, why can’t we sponsor them all?”

In the end, Anna picked Germina, age four, who we knew for months only by her shy smile. But now, we found ourselves walking through her neighborhood – mother behind daughter — toward that rare and beautiful moment when pixels would become a person.

Not everyone gets this opportunity. This truth was not lost on me as we spent our Saturday morning visiting children that we and some of our friends in Iowa sponsor. We had come with gifts: dresses and underwear and crayons and Bibles translated in Haitian Creole. Every year, thousands upon thousands of generous people sponsor children around the world — in Haiti and Ethiopia and Kenya and Brazil. But only a small few get the chance to do what we were doing, to cross the threshold into their sponsored child’s homes.

We didn’t take it for granted. I want you to know that. I thought of you when we walked that path, and how you love someone far, far away with your monthly contribution, knowing that there’s scant chance of you meeting face-to-face.

And here we were, seconds away from every sponsor’s dream come true.

Anna peeked around the corner of a blue-tarped shack on a scrubby yard to find Germina, one of the countless millions of children around the world who need to know that they matter to God, and they matter to people. Simply because they exist – as a remarkable, beloved creation of God.

“Germina?” Anna called out, stretching her arms to embrace the child. I thought it then, how the shortest distance between two friends is a simple hug.

Our host, Webert, told Germina and her mother that Anna was Germina’s sponsor for school. The mother and I looked over the heads of our little girls, who were embracing. We spoke a language that only mamas know, and we didn’t have to use a single word. We locked eyes again and again, as Anna put a purple sequined hat on Germina’s head, showed her how to use the PlayDoh, held up the dress to a young girl’s shoulders.

And her mother beamed when Anna handed Germina a Bible storybook. 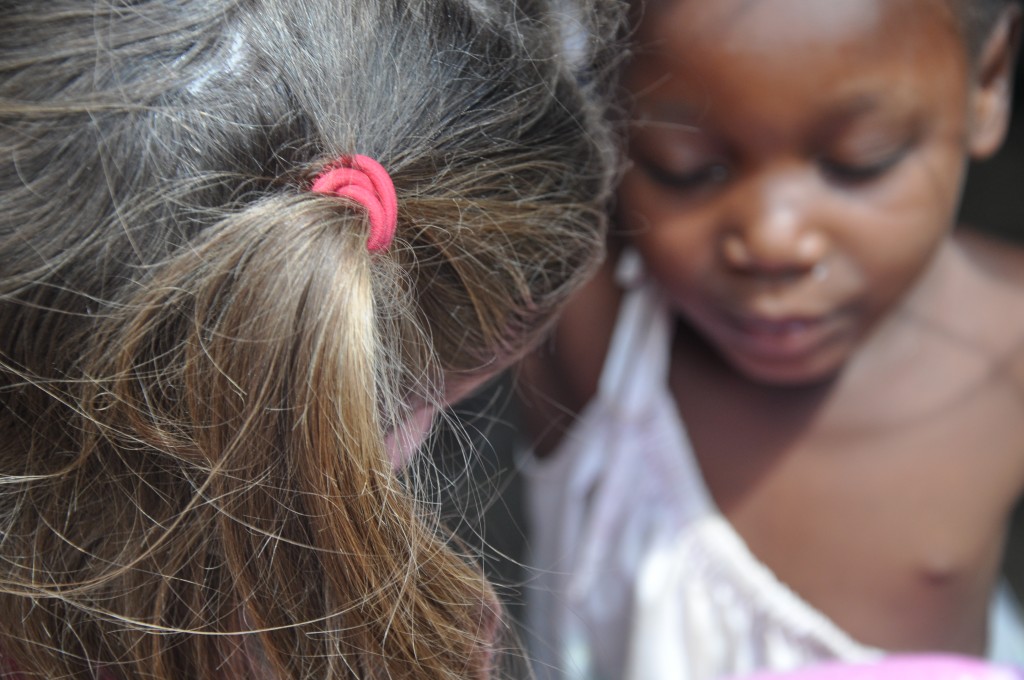 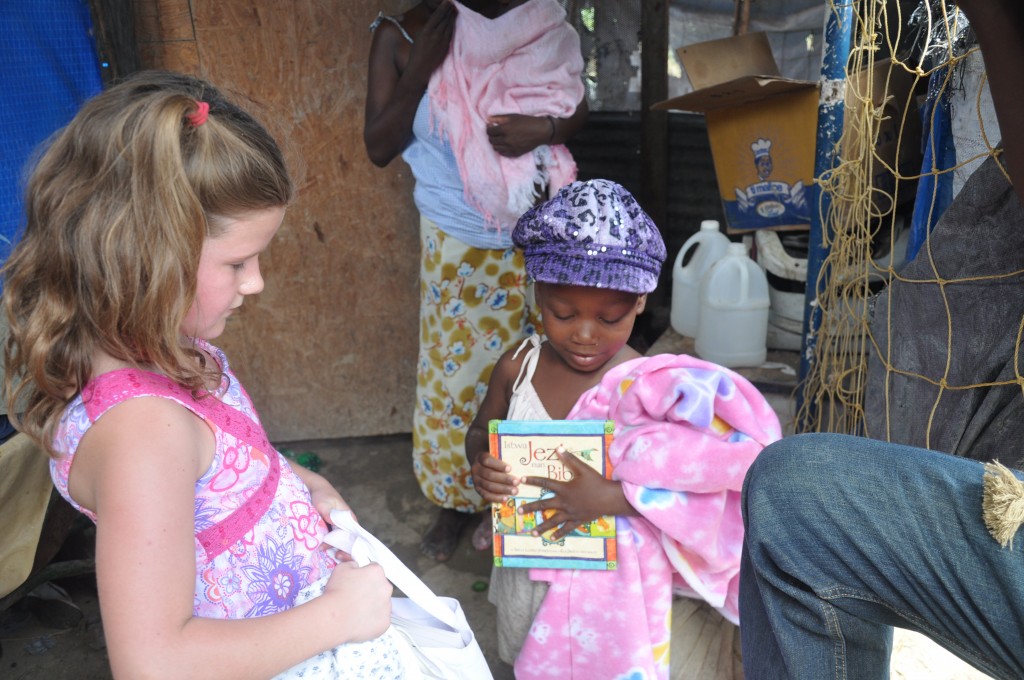 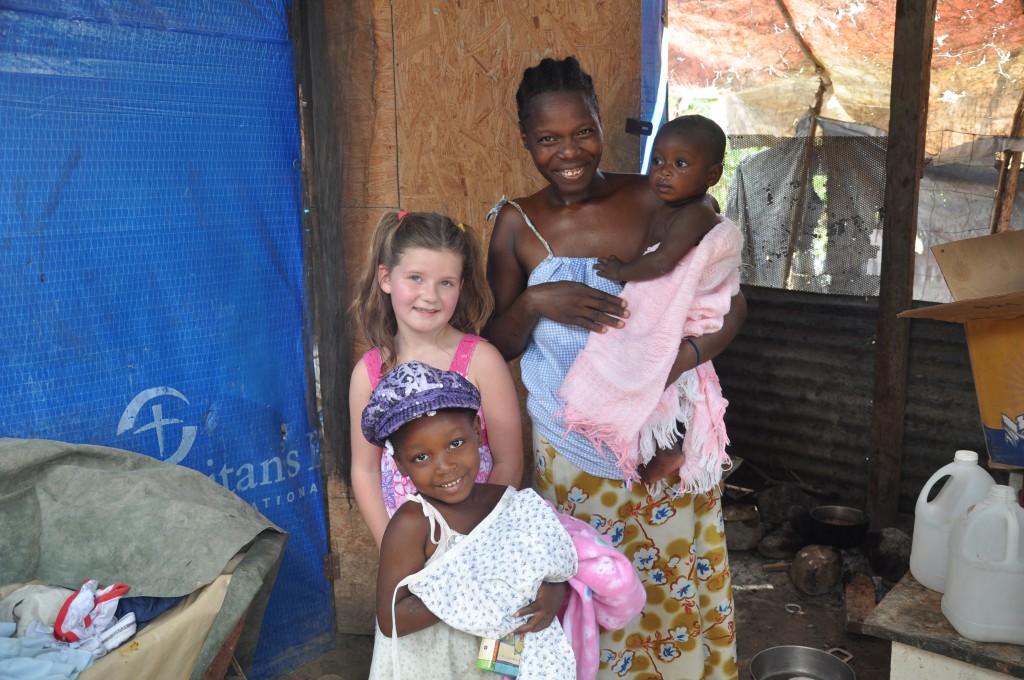 They posed for photos, and we said goodbye, moving on toward more children, more smiles, more hugs, more knowing glances between mothers. And on our way, we passed by dozens of others, all of them, waving and smiling … and waiting. Still waiting. And how long they’ve been waiting …

And could we sponsor them all?

We really could. And if not all, just one more? Every drop counts.

Here are some photographs of our day, delivering gifts and hugs to our sponsored children, as well as to the children sponsored by others:

We were delighted to happen upon Vedline, the child sponsored by Lydia, when we least expected. They became fast friends and plan to play together at the school playground tomorrow during recess. 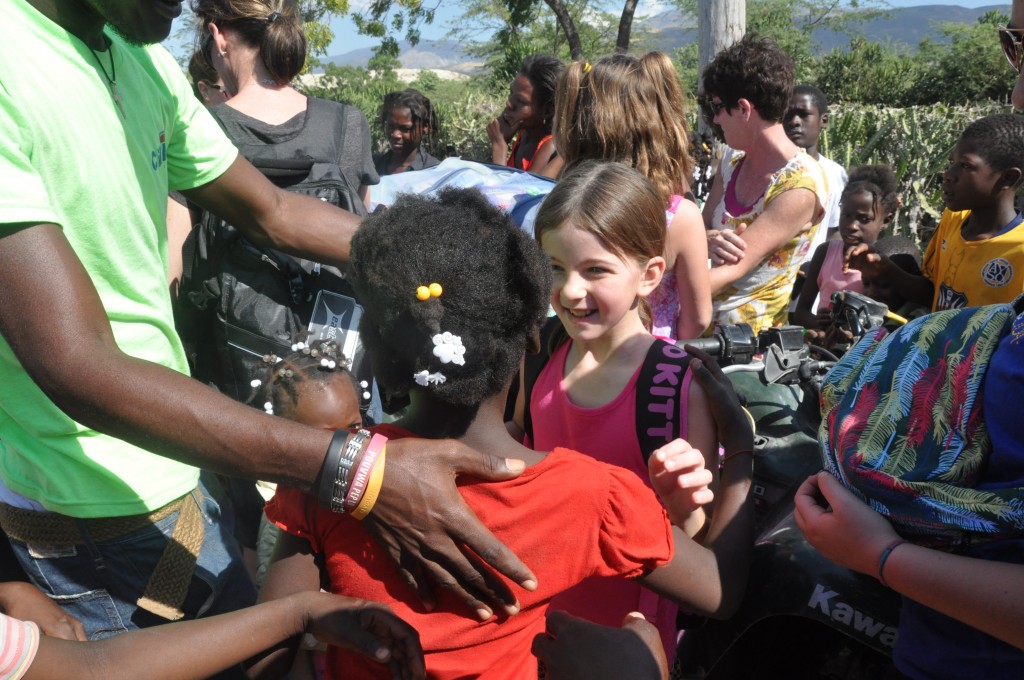 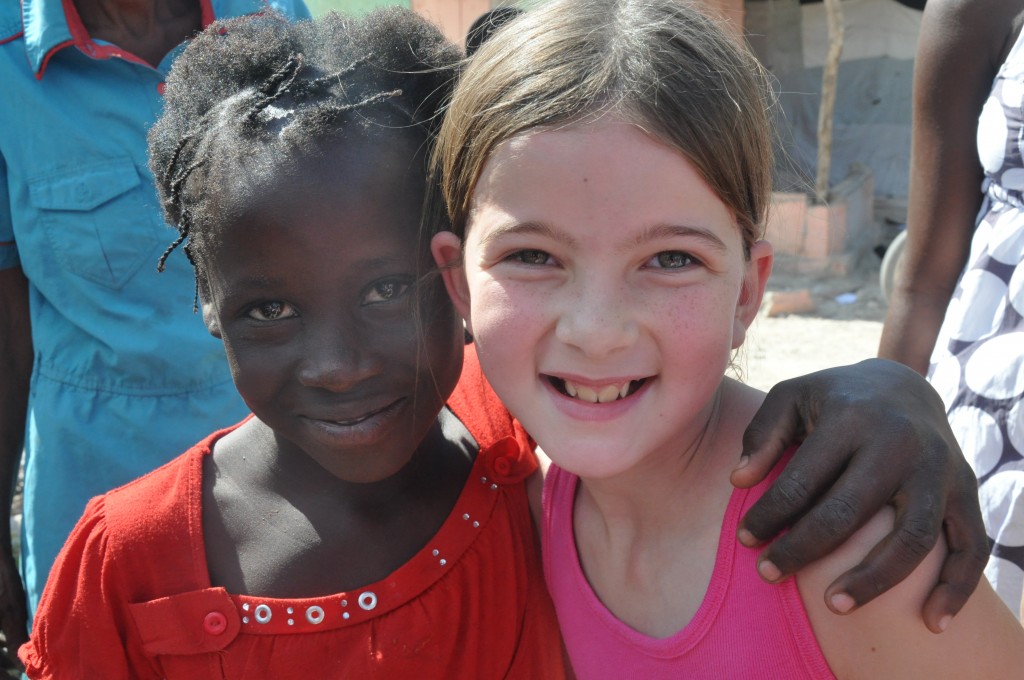 My dear friend and neighbor Michelle greets ClaudeBensky, the boy sponsored by her mother. 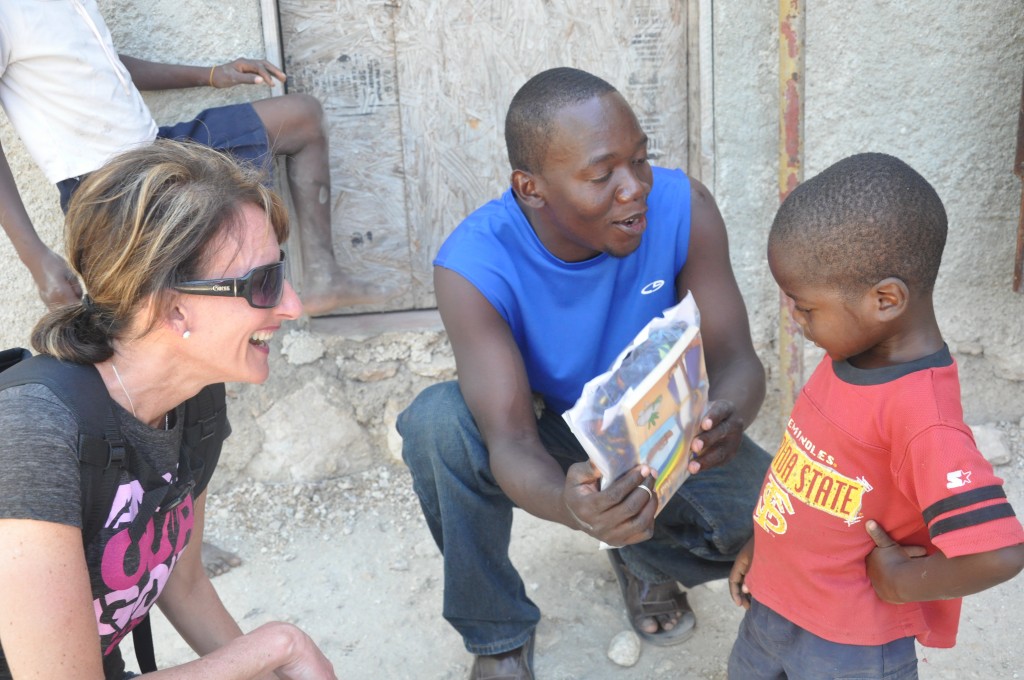 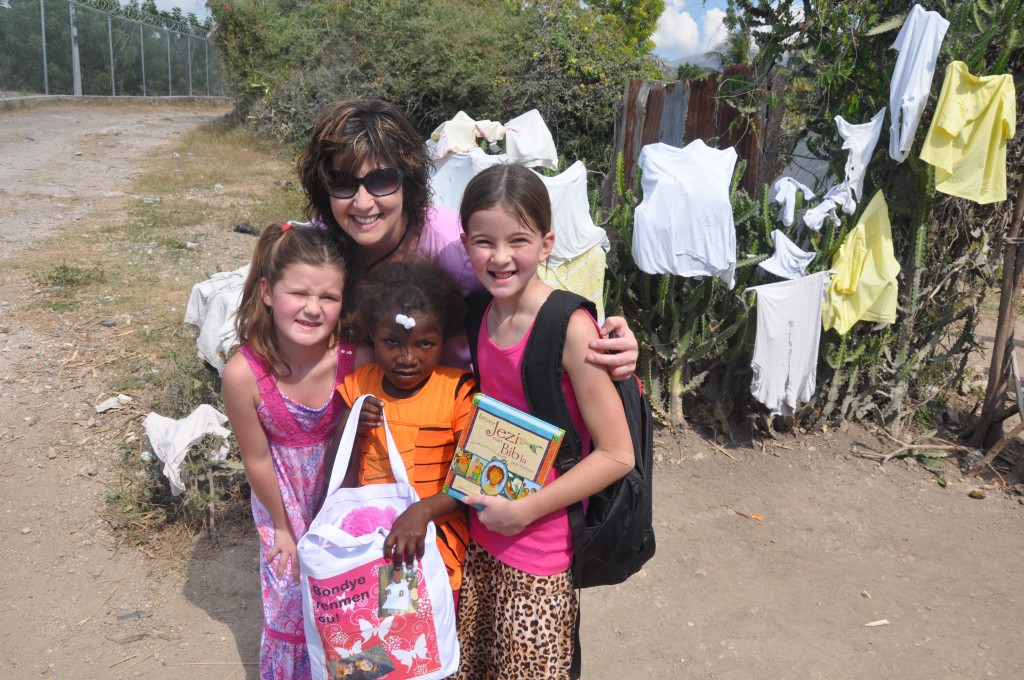 We’re sponsoring our children through Touch of Hope, founded by the Grooters family of Iowa along with Webert Raymond of Simonette village in Haiti. In 2006, Webert determined that he would stay in his village of Simonette to open a school in the village where he grew up, despite his potential for “upward mobility.” A Port-au-Prince businessman had, in fact, strongly encouraged Webert to find professional work in the city. But Webert knew what God had laid on his heart: to educate children in his home community. That year, at age 22, he opened a school with wood-pallet walls and tarps. In 2010, the Grooters family met Webert, and with the help of others, they came up with the resources to build the Simonette school. (This is the school where Lydia’s playground has now been installed.)

The school has grown rapidly, and Webert says it has begun to transform his home village. At the beginning of the 2012-13 school year, more than 700 students were enrolled at the school. But more than 500 of those students still need sponsors. Touch of Hope needs us.

The school has made a tremendous impact on the local community, educating and feeding hundreds of children every day, while also employing Haitian teachers, cooks, and staff. The Touch of Hope ministry is committed to supporting the local community – buying and supporting local people and businesses – right here where Webert grew up, and where Webert chose to stay, at Christ’s calling.

If you are feeling led to be a part of this amazing ministry, please visit the Touch of Hope Facebook page here or the blog of Kayla Grooters here. For $35 a month, you can sponsor a child. Kayla and Webert are committed to making personal connections between sponsors and students. 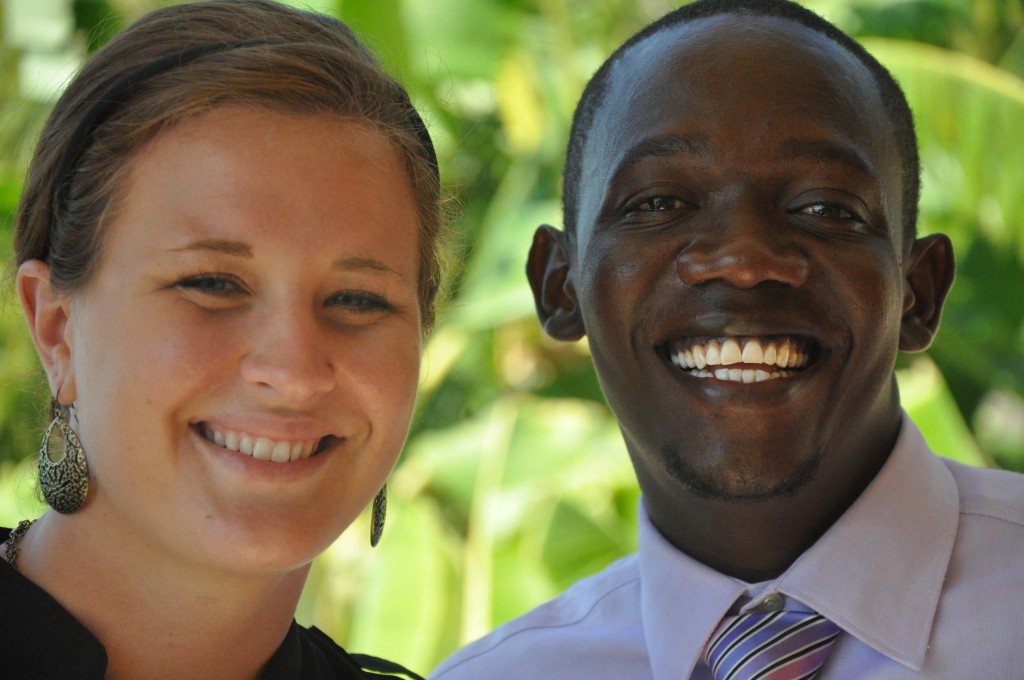