#TellHisStory: What our Faith Heroines Teach Us (Guest Post from MichelleDeRusha + A Giveaway) 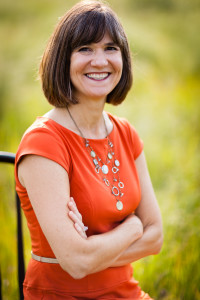 I am so excited to have Michelle DeRusha hanging out with us today.

that we seriously NEED to read.

And it might be your lucky day: we’re giving away a copy of that book today in celebrate of the release of Michelle’s book! Read her post, and then enter below for a chance to win her book.

(If you’re here for #TellHisStory, the linkup is at the bottom of Michelle’s post.) 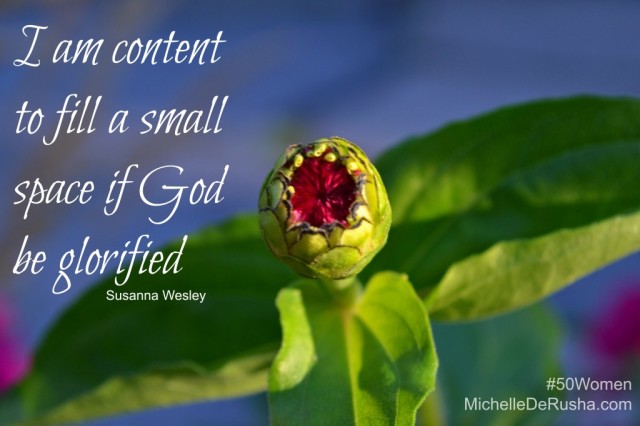 One of the things I noticed in researching and writing about the lives of 50 Christian women was just how many of these women refused to take “no” for an answer.

I think sometimes as Christians, and particularly as Christian women, we assume “no” is the last word. We hear “no,” and we wonder if we’ve misinterpreted our calling or taken a wrong turn on the path. In the word “no” we often hear a reprimand. We wonder if it’s a sign signaling that we’ve strayed.

But what if “no” is not, in fact, the final word? What if the “no” we hear is simply a God-ordained detour?

Mary McLeod Bethune, Gladys Aylward and Mother Teresa lived and served in vastly different places and circumstances, but all three shared something very important in common. They didn’t accept “no” for an answer, and that decision impacted not only their lives and faith, but the lives and faith of thousands of others.

Of the approximately 1,000 students enrolled in Chicago’s renowned Moody Bible Institute in 1887, only one was black. Mary McLeod Bethune had set her heart on serving as a missionary in Africa when she graduated from the Institute. But when she applied to the mission board, she learned there were no openings for “Negro missionaries” in Africa.

Refusing to abandon her dream, Bethune simply shifted her focus closer to home.

“Africans in America needed Christ and school just as much as Negroes in Africa,” she said later. “My life work lay not in Africa, but in my own country.”

With $1.50 as the down payment on a two-story rental building, Mary went on to found the Daytona Literary and Industrial School for Training Negro Girls in Florida. When the school opened in 1904, she had six female students, plus her own son.

Today, the school, now known as Bethune-Cookman College, enrolls 3,500 students on an eighty-acre campus in Daytona Beach. Mary McLeod Bethune served as the college’s president until she retired in 1942. She also worked as director of the Division of Negro Affairs of the National Youth Administration and as special advisor on minority affairs for President Franklin Roosevelt.

“Love, not hate, has been the foundation of my fullness,” said Bethune, who fought racism on the front lines for her entire life. “Faith and love have been the most glorious and victorious defense in this ‘warfare’ of life, and it has been my privilege to use them.”

Gladys Aylward – Taking Matters into Her Own Hands

Gladys Aylward dreamed of working as a missionary in China. But when the director of the China Inland Mission determined she was neither smart enough nor young enough for overseas missionary work, Aylward took matters into her own hands.

For two years Aylward worked as a maid and practiced evangelizing on London street corners. When she’d finally saved enough money, she slipped her passport into her corset, purchased a ticket for the Trans-Siberian Railroad and began the long journey east, across Russia and into China.

In the mountain village of Yangchen, China, Gladys founded the Inn of Eight Happinesses, which first offered food and shelter to travelers and later became home to more than 100 Chinese orphans.

“I wasn’t God’s first choice for what I’ve done for China,” she said. “There was somebody else…It must have been a man – a wonderful man, a well-educated man. I don’t know what happened…God looked down and saw Gladys Aylward.

Sister Teresa, as she was first known, spent 19 years in a secluded convent before she heard the call from Jesus to relinquish her life as a cloistered nun and follow Him into the slums of Calcutta. “I knew it was His will and that I had to follow Him,” she said. “There was no doubt that it was going to be His work.”

The papal authorities in Rome, however, disagreed.

For two years Teresa wrote dozens of letters to her mentor and spiritual director and to the archbishop and cardinal in Rome. She was not beneath outright begging, but time and time again, her pleas were answered the same way: she was told “no.”

“I must go – and go quickly…Souls are being lost in the slums and in the streets,” she pleaded to the archbishop. “The Sacred Heart of Jesus is more and more suffering – and here I am waiting – for just only one “Yes” which the Holy Father I am sure would give, if he knew of it.”

Finally, Teresa received news that Pope Pius XII had granted her permission to leave the convent. Nine days later, wearing a simple white sari and carrying five rupees in her pocket, Teresa walked out of the convent and toward the Calcutta slums, where she served the poorest of the poor for the rest of her life.

Mary McLeod Bethune, Gladys Aylward and Mother Teresa found the courage and the conviction to answer God’s call, even when outside forces threatened to stymie their progress. Their trust in God allowed them to persevere past roadblocks and persist along lengthy detours in order to fulfill the calling they heard for their lives. 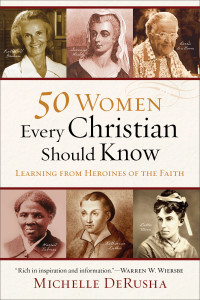 Mary McLeod Bethune, Gladys Aylward and Mother Teresa are three of the fifty Christian women featured in Michelle DeRusha’s recently released book, 50 Women Every Christian Should Know: Learning from Heroines of the Faith

From Catherine of Siena and Anne Hutchinson to Susanna Wesley, Harriet Tubman and Corrie ten Boom, this book of engaging narratives spans more than 900 years and brings into focus fifty incredible heroines of the faith – women who inspire and encourage us. Women who remind us that we are not alone, that the battles we face today are not new, and that God is always with us in the midst of our struggles.

Michelle is also the author of Spiritual Misfit: A Memoir of Uneasy Faith. She lives in Lincoln, Nebraska, with her husband and their two boys. You can connect with Michelle on her blog and on Facebook and Twitter.

So, what’s your Story?

A #TellHisStory is any story that connects your story into the story of God.

A final note: This is a safe place to tell your stories. You don’t have to be a professional writer to join us. Story is built into every single one of us. Your story matters, because it’s part of God’s story down through history, not because you punctuated everything correctly. Deal?

For more details on the #TellHisStory linkup, click here. Share the love of story by visiting someone else in the community!