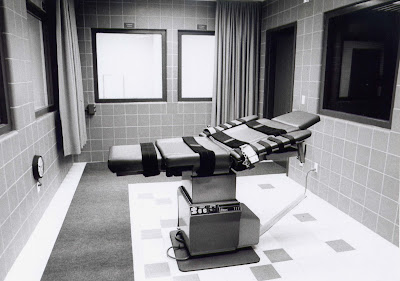 I drove east, two states away, to watch a man die.

It was part of my job as a news reporter: recording what happened before last breaths were taken. I was unofficially on the “Death Beat” — covering carnage left by ravenous tornadoes, consuming fires and death-hungry gunbattles that fed on 14-year-old gang members (each of them somebody’s son). I remember looking into the casket of a boy once, who’d been shot on the streets of Omaha, Nebraska. His mama had placed a love-worn teddy bear in his lifeless, boy arms.

I’d covered unplanned death a hundred times or more. And I had grown steely cold to it. For it was the only way I knew to survive it.

But this pilgrimage eastward was different: this death was scheduled, and the idea of seeing a killer face-to-face before his heart stopped cold sent my own heart pounding.

On that summer day in 2001, I had been assigned to cover the execution of Timothy McVeigh, who had bombed the Oklahoma City federal building six years earlier.

McVeigh was to die at 7 a.m. by lethal injection in the execution chamber of the U.S. Penitentiary in Terre Haute, Indiana.

I showed up in Terre Haute the day before.

Belly swelling with our firstborn, I walked a mile to the prison grounds, and it was like walking down Midway at the State Fair. People were outside the prison grounds selling 25-cent lemonade and shish kabobs. Others hawked T-shirts. Protesters were picnicking at the roadside. News reporters were “carrying it live,” sharing death with a worldwide audience.

This was how America participated in the dizzying deathwatch of a terrorist. And I had just become a part of this macabre spectacle; me, this round-bellied mama-to-be with a spiral-bound notebook in my hand.

An editor assigned me to travel to the prison because of an Iowa connection to the story. A native Iowan had died in the bombing, and his brother was assigned as one of the 10 victim witnesses to watch McVeigh die.

There were 10 other seats available for news media, and I was instructed by my editor to sign up for a “chance” to see the killing of a killer.

A reporter’s “dream” became one woman’s nightmare. I knew by the time I was halfway across Illinois that I couldn’t watch someone be killed — no matter how “humane” the process, no matter how much pain McVeigh had inflicted on others, no matter how many times I’d seen the aftermath of death before.

I felt physically sick, so prone to queasiness anyway as new baby-life grew in me. How could I watch as they injected a lethal cocktail into human veins?

Sodium pentothal, to render him unconscious.
Pancuronium bromide, to collapse his lungs.
Potassium chloride, to stop his heart from beating.

All I wanted to do was go home. The world was racing and protesting and chanting for death, and reporters with microphones and cameras were finding their places, and I wanted out of the race.

I just wanted to rest.

I went back to the hotel room to file the

story of McVeigh’s last day. And instead of returning to the prison that evening to sign up as a potential witness of the next morning’s execution, this weary mama went to bed and prayed a feeble prayer: “Lord, help me.”
I couldn’t do it. I chose rest over the race for a story.

For a time, I occasionally second-guessed the decision. What kind of reporter was I anyway?

As a reporter, perhaps I failed that day. I did get a story, after interviewing other witnesses to the execution, but it wasn’t the same as a firsthand account. Though in this sense I stand tall: I had considered lying to my editor, telling him that I had signed up as a witness but that my name hadn’t been drawn. I decided to tell him the truth instead. (He didn’t hide his disappointment.)

As I drove west toward Iowa that afternoon, this mama-to-be felt peace. I was a pilgrim just beginning to grow in the freshness of my faith. And for the first time I can remember, I responded from my heart with a resounding “NO” when everything else in me said “YES.”

Even now, I still remember that day when I first picked rest over the race.

My life is quieter now, here on an Iowa farm. But even here, life can feel like a race sometimes. I’m asked to do a lot of things that others want me to do. Often, I say yes. But sometimes, I know I must say no.

Too often in my life, I’ve said ‘yes’ to things I didn’t really want to do — for fear of disappointing someone, for fear of looking like a failure.

But something changed in me that day on the grounds of a federal prison. Because I learned that day that a woman’s heart can respond with a resounding ‘no’ even when the world says ‘yes.’

Photo: From my McVeigh file. The gurney on which a terrorist died.

Friend, how do you find rest in a racing world? How hard is it to say no?

Each Wednesday, I join Ann Voskamp as we Walk With Him.
This week, we consider “How to Find Rest in a Racing World.”

Would you consider joining us over at Ann’s?