Planned Parenthood, the Value of Life, and a Grace that Finds You Wherever You Are

The sign said that the word fetus means “little one.” In the two boxes beside the sign, there were eight models of “little ones” — progressing in size in four-week increments.

“Can we hold them?” my daughter whispered.

I nodded, and picked one of them up myself. It was a model of a 12-week old fetus. A little one. The size of a lime. Its arms were crossed over the chest, legs fixed into a pretzel.

When you held them in your hand, they were weighted, to give you an idea of how heavy a baby is at each stage.

My daughter ran her fingers along one of the smaller models — the size of a pea pod with teeny toes — and remarked, “Look how much a baby already has, even when he’s this small.” 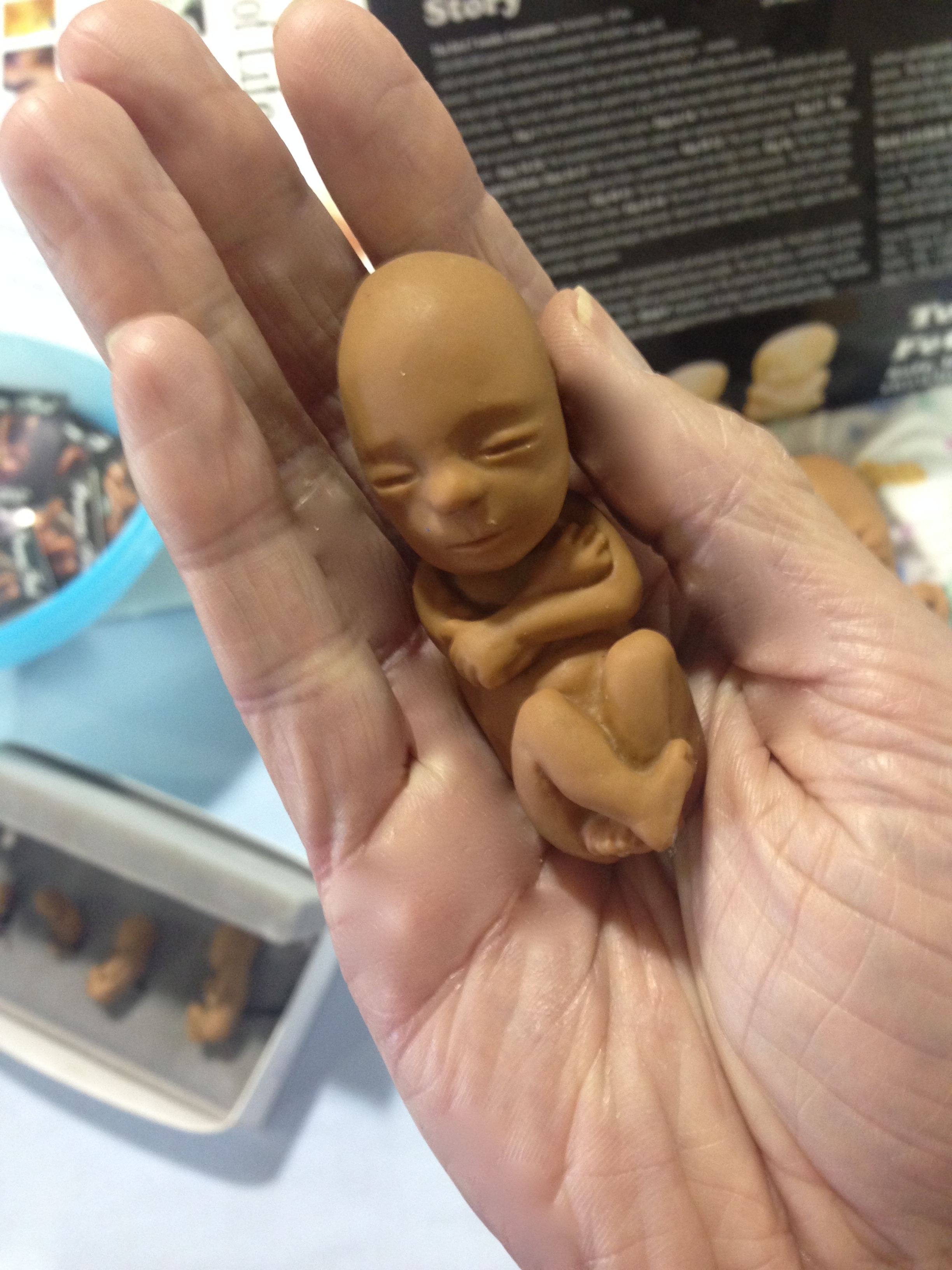 While I was standing there, with the model in my hand, my mind ran along four tracks, in this order:

First, of course, I contemplated the incredible miracle of human life, and how God thought up every part of us, before even time began.

“For you created my inmost being;
you knit me together in my mother’s womb. …
Your eyes saw my unformed body;
all the days ordained for me were written in your book
before one of them came to be.
(Psalm 139: 13, 16)

Second, I thought about the videos being released over the last week, in which Planned Parenthood executives talk about selling the tissues and organs of aborted fetuses. I thought about the debate that rages on over a woman’s right to choose, and the value of a human life.

Third, I remembered what I once believed. At age 20, I was an outspoken pro-choice advocate. I had a weekly column in our campus newspaper, and more than once, I fiercely defended a woman’s right to make decisions about the life of her unborn child. I even had a T-shirt that boldly — in black and white letters — proclaimed my pro-choice stance. I never want to forget that, because it reminds me that the opinions we hold so dear at some points in our life, can completely shift as we grow and learn. Years later, my views about abortion would radically change. I don’t generally talk about hot-button issues around here, but I am pro-life. I don’t think that will surprise you. I believe that God is the giver of life, and that each human being has astonishingly high value. I believe that every “little one” should have the right to be who God made her to be.

But I also believe this, and it’s really important, so I’m going to put it in big letters:

I believe that every mother is cherished and loved by God — even the mother who made the decision to end the life of her unborn child. She is not despised, but cherished. She is a person.

Church, How can we love that mother today?

Which brings me to the fourth track of my thinking, as I held that lime-sized model in my hand.

If the statistics are right, one in three women will have had an abortion at some time in her life. That means that about one-third of you, my readers, have made that decision. Some of you have no regret about your decision, and you have your reasons. But some of you do have regret — and you carry it with you wherever you go.

Some of you have kept your secret hidden — maybe for decades — and some of you carry deep shame about what happened that day. Some of you weep once a year, on the anniversary, but nobody knows why you cry. Some of you couldn’t watch the videos, because of what it triggered in you. Some of you think that you’ve traveled too from God to ever be touched by His grace.

If that’s you today, come in close to me so I can whisper a few words to you:

Listen, girl. You are loved. Ok? You are not the sum of your decisions. You are not the accumulation of your regret. And you are not meant to bear your brokenness alone. Let someone touch your wound today, and let her help you carry it to Jesus. I would be willing to be one of the helpers. I’m right here. Know this: You are never too far from hope, and you are not out of the reach of God’s grace.

All brokenness is but a chance to be healed by Jesus. 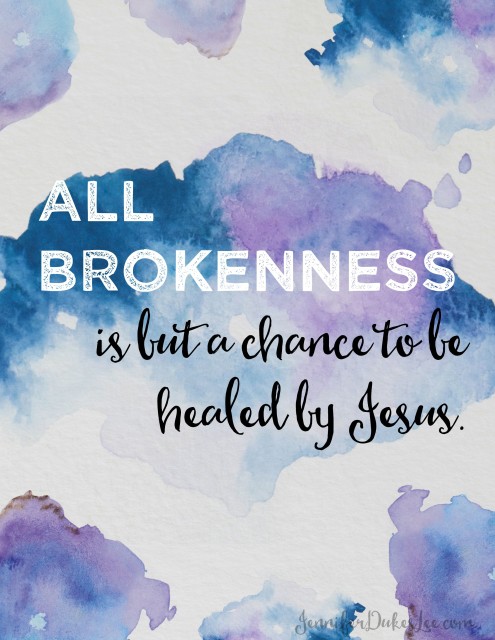 Maybe today is the day when you can let Jesus heal all the broken places.

And to the rest of us — to the other two-thirds who have no idea what the one-third is feeling — let us choose our words wisely when we write about our thoughts on Facebook, or Twitter, or on our own blogs. I hope that I have done that today. I hope that I have chosen wise words, hopeful words, God-approved words. I beg God’s mercy for the areas where I may have said something that made the pain greater. I am not practiced at having these kinds of discussions here. And I ask your forgiveness, if any of this has caused you pain.

My deepest desire is that none of us feels as if we are beyond the healing grace of God.

Last night, on my Facebook page, I preached a mini-sermon to myself, and maybe you needed to hear it, too?

We are at an important time in our history. People need the hope that we have, and we know exactly where they can find it — in the heart of Jesus Christ as revealed in Scripture. But that means we have to choose our words carefully, deliver them prayerfully, and live out our messages faithfully. As much as I want to defend God’s Word, I am under a mandate to actually LIVE IT.

A world in desperate need is watching. They’ll know we are Christians by our love, not our soapboxes.” 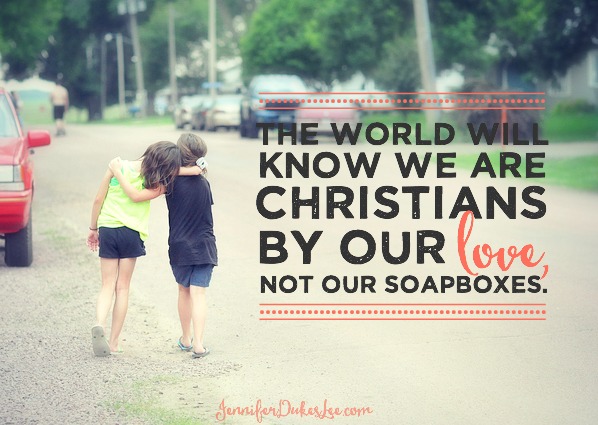 Other resources to consider:
Pastor Scott Sauls, “On Planned Parenthood, Mother and Child, and Justice for All”
Lelia Chealey and a bit of her testimony, “His Words”