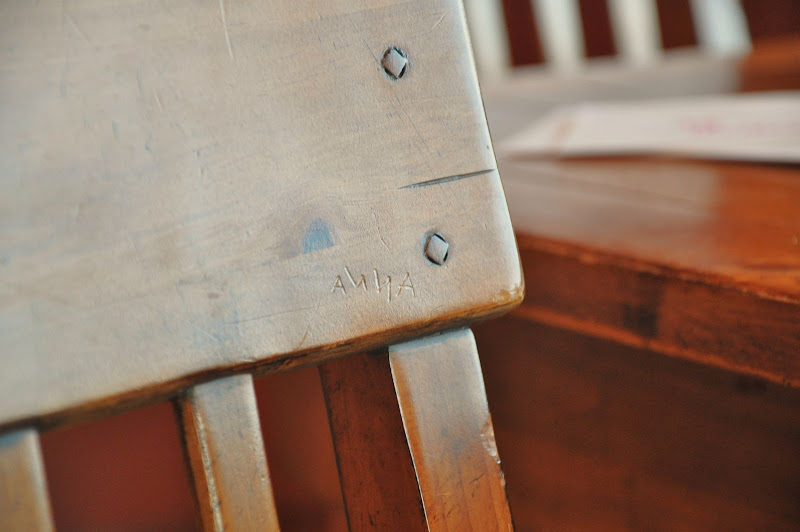 I asked the world’s most obvious question:

I jabbed a finger at the letters carved in the back of the chair: A N N A.

The oldest sister chimed in first, rolling her eyes for dramatic effect. “I recognize those backwards Ns anywhere.”

The youngest sister’s fork fell with a guilty clink on the plate. She buried her face in her palms, as if she might squeeze her whole self behind her hands if she pressed hard enough.

I could see the red of shame rising in her cheeks, behind her meager camouflage.

I trapped my tongue behind clenched teeth. Hush, Jennifer. You’ll regret what you’re about to say.

Hadn’t I promised that I’d never raise my voice over this etched set of table and chairs? Hadn’t I, indeed, declared publicly that I found the beauty in the etchings? Hadn’t I determined that the table held memories all its own, with its nicks and scrapes and curves of letters?

It is a tableau of life, this wooden rectangle.

Deep-grooved tine points. They were banged in by a toddler, first time with a “big-people fork.”

One long scratch. A souvenir from the visiting missionary.

And now this: Anna’s name carved in half-inch tall letters on the back of the chair.

I peeled her hands back from her hiding place, and lifted her, ladling her body. She shook. Shame ran wet down her cheeks.

I held her tight, swallowing the caustic sermon about the difference between right and wrong. She knew. She knew.

Three days later, just this morning, she stood at the back door, with her gaze locked on her feet.

“I did it Mommy,” she confessed.

“Did what, Anna?” I asked, making a panicked inventory of the room. (I had forgotten about the chair, but suddenly remembered the Sharpies within reach.)

“I put my name on the chair because I want that to be my chair, and you always move it when you mop the floors,” her words spilling relief and the hope of a pardon. “Are you going to be mad at me now?”

I dropped to my knees in front of her, lifting her chin to release her gaze from the tips of her snowboots. We talked about why it was wrong to carve forever letters into the wood. I repeated a lesson about respect and care for the things that God has given us. We talked about the importance of saying sorry. And she did. She said sorry.

But there’s something I didn’t say. I’m saving it for this space, because I know she can’t read yet. So let’s keep this one between you and me. Deal?

I took Anna to the end of this country lane a bit ago, where the bus met her at 8 a.m., and then I promptly returned to the kitchen to snap a few pictures of a single word carved in wood, a name engraved, an enduring little Valentine from a girl who won’t write with backward Ns much longer.

***
And today, the carving makes me think
of the Father, and of this:

Submitted as part of L.L. Barkat’s “On, In and Around Mondays” series.