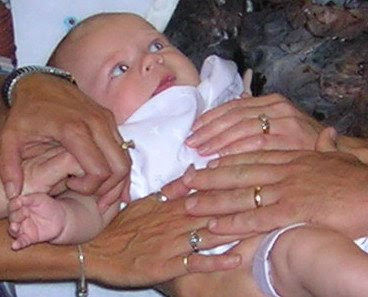 I like to write about encountering God in unexpected places. But it’s immensely reassuring when you sense His presence in the places you’d most likely expect it, like at the side of a baptismal font.
That’s where my husband, Scott, and I found ourselves Saturday night. We were honored to serve as two of the four Godparents for our new nephew, Taylor. We stood alongside Taylor’s parents Saturday night as a pastor dribbled water on little Taylor’s head. During the actual rite of baptism, Taylor’s eyes were half-closed, and in his precious slumber, didn’t recognize the significance of this Holy act. But on his behalf, along with Taylor’s parents, we stood in gratitude for God’s grace.
Baptism has produced lots of division among Christian denominations. Some think it’s the key to salvation. Others believe it’s nothing more than ritualist pageantry. Others have sought a middle ground with “baby dedications,” in the hope that their child would make a commitment to follow Jesus at a later time.
I am no theologian, and I don’t want to use this space to argue the particulars of baptism. But this I know: God was present with us as we stood by the baptismal font. At 6:15 on Aug. 23, 2008, God reached down to little Taylor. As his Godparents, we pledge to hold Taylor up in prayer. We pray that Taylor will one day reach up and accept God’s hand and willingly walk alongside Him. Not with the half-closed eyes of an infant, but with maturing eyes open to the knowledge of God’s goodness and grace. Until then, we consider it our privilege to tell Taylor what it’s like to take the hand of God when He reaches down to us. Because He does — sometimes in places we least expect to find Him.
God bless you, little man.