Life Lessons from the Inverted Pyramid

For more than a century, news reporters have crafted stories by writing the most important facts in the opening paragraphs of a story. As the story continues, the facts become less relevant.

It’s known as the inverted pyramid.

I’ve written thousands of stories with the facts stacked that way — starting with the most relevant pieces of information. These days, I teach the technique to  college journalism students.  In essence, we are giving away the ending in the opening paragraph, reversing what storytellers have done for centuries when they stack facts chronologically.

It goes against our instincts as writers.

In a book, you’ll often wait until the last pages to learn that the prince and princess lived happily ever after. In news, however, we tell you up front that “the butler did it.”

Newspaper legend has it that the inverted pyramid was developed during the Civil War when reporters transmitted stories from the battlefield by telegraph, an unreliable method of dispatching the news. Stories would sometimes get cut off mid-sentence, before revealing who won the battle. Editors asked reporters to begin their stories with the most important information, adding lesser details later. Relevance trumped everything; the inverted-pyramid was born.

Today, if stories need to be shortened because editors don’t have enough room on the page, they can trim from the bottom. The most relevant parts of a story are preserved, instead of landing on the cutting-room floor.

{And what if I stacked
a life upside-down
like that?} 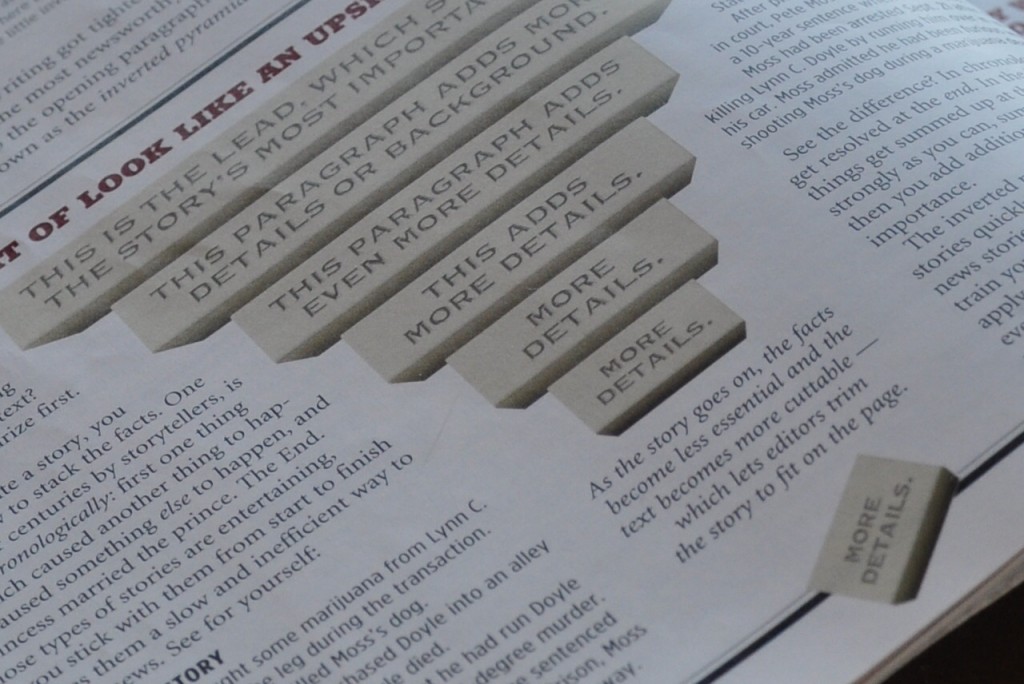 Writing in community with Lisa-Jo at The Gypsy Mama.
On Fridays, she gives us a word-prompt and asks us to “stop, drop, and write” for five minutes flat. Today’s prompt: RELEVANT.