Lydia paws through the office garbage can again, on a search-and-rescue mission. And I scold myself for not removing the evidence before she discovered it.

I’m at the kitchen table, writing letters, and I can hear her shuffling discarded papers, in this rearranging of the tossed and found. I make a quick mental inventory of what I’ve heaved — most of it from my own filing cabinet — and I sigh relief that the refuse pile will hold nothing of major significance to an eight-year-old girl.

And that’s when she comes to my side, thrusting her most recent find under my nose.

“You’re really going to throw this away?”

She’s holding a picture of Jesus.

Her voice is dripping with that newfound tone of sarcasm, which she picked up this year. “Don’t you love Jesus anymore? Nice job, Mom.”

A decade or more ago, I had slipped that photocopied drawing of Jesus into the filing cabinet. It was a fine drawing — but a poor photocopy — and I when I came across it the other day while organizing files, I just couldn’t imagine myself ever making use of it.

So I threw the picture away. And yes, it did cross my mind that I was throwing Jesus in the garbage.

The eight-year-old asks, Can she keep it?

And yes, of course she could. She takes the picture into the office, and I put the pen to paper again, writing letters to prisoner. My favorite farmer plants seeds in prisons — as well as fields. And when he goes to the prison, he always takes the letters I write, for these are little seeds of my own. My words don’t seem like much, just a few thoughts scrawled on notecards. But when the thoughts point to God, they have measureless worth, don’t they?

I write, and the eight-year-old returns 10 minutes later.

“Look, Mom,” she says. She had taken the Jesus picture, folded it in half and written a note on the inside, in amateur cursive:

And he did take it to prison. He took a small stack of letters from this mama, and a few notes from little Lydia, who wrote on some scraps of paper … and that rescued piece of garbage.

When the farmer returned from the prison, he told of the harvest. And he pulled from his suitcase another scrap of paper — a note for Lydia from a prisoner named James.

“Dear Lydia! I just want you to know, for you to think of us has put a smile on my face, and the picture of Jesus you sent … I got and will keep for many many years to come …” 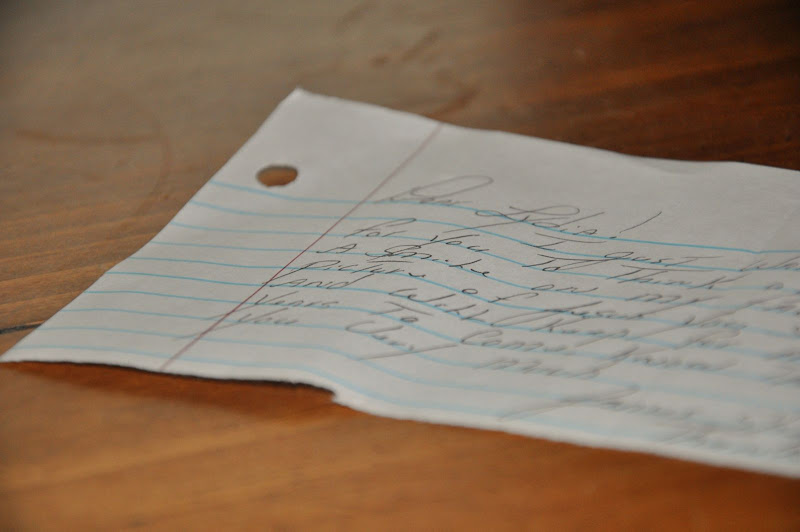 A drawing of Jesus, destined for the landfill, is now tucked between the pages of a Bible of a man named James.

And that is so God.

He sees the treasure of those whom the world regards as discarded.
In the things we think have no worth, God finds value.

Even in me. Even in a recovering prisoner like me. He finds worth in me.

“That He should give His only son
And make a wretch His treasure.”