How Would Jesus Vote? 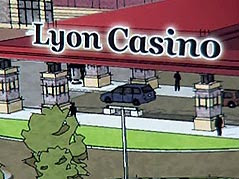 I sort of enjoy putting a $20 bill in a lottery machine every now and then. I understand the odds are against me. I sometimes win. Most often, I lose. That’s the way gambling works. But it’s kind of fun — in a mindless sort of way.

But when it comes to the Great Casino Debate of 2008, I’m voting no.

A bit of background on the debate: Kehl Management of Riverside, Iowa, is proposing a $90 million casino/resort to sit in Lyon County, just east of Sioux Falls.

Proponents say the casino/resort will bring needed jobs and entertainment to our area. Opponents say the jobs and fun will come at a big price, because of the social ills of gambling.

I will vote ‘no’ that day, but I’d also like to get a few things straight:

There are lots of good, God-fearing folks who are voting yes. And it pains me to see them villified for their opinions in favor of a casino. The people who are voting ‘yes’ aren’t evil. They aren’t out to ruin the county. And they aren’t God-less heathens.

On the other hand, those of us who are voting against the casino aren’t close-minded, stodgy roadblocks standing in the way of economic progress.

I’ve been so frustrated to watch from the sidelines as good-willed people on both sides of the issue have been tearing one another down over this. Good folks in our county are allowing this issue to divide. I’ve seen nastiness emerge in letters to the editor. I’ve seen backbiting take place. I’ve seen friendships broken as a result of this issue.

Who’s the winner when that happens? A creep called Satan.

So how did we let this happen? What will we do to unify when this is over?

So the big question: How Would Jesus Vote?

I don’t know. Wish I knew. The way things stand now, I have a feeling that Jesus doesn’t particularly agree with some of the tactics on either side of this issue. Jesus is a spiritual figure, not a political figure. He’s looking for our hearts. But somehow, He’s been co-opted into the center of all sorts of political debates.

I’m voting no because I don’t think the casino is right for our county. Gambling is not economic development. It’s an enterprise that makes money off the losses of others. Any money that returns to the county or the schools or the new swimming pool is returned only because someone had to lose it first. Furthermore, I’ve seen firsthand how gambling hurts families financially and emotionally and spiritually.

But again, it’s unfair to say that folks who are in favor of the casino are a bunch of money-grubbing heathens who don’t care about Iowa families. That’s simply untrue.

There are many fine, God-fearing folks sitting on both sides of this issue. The signs in favor and in opposition to the casino are like little flecks of confetti covering my town of Inwood. The signs are in the yards of my daughter’s school-bus driver, our church secretary, my father-in-law, my card-club friends and one of my Bible study partners. They are all wonderful men and women. They all are followers of Christ. I know, because we talk about these things with one another. And, as it turns out, these Christ-followers happen to fall on different sides of this political issue.

That’s the beauty of living in this great country where democracy exists and varying viewpoints are encouraged — or at least ought to be.

Two days ago, as I was driving through Inwood with my 6-year-old Lydia, she asked me why some of the signs in yards say: “Vote Yes for the resort,” while other signs say “Vote No for the casino.”

Good catch, Lydia. I explained to her the rationale behind the marketing on both sides, and Lydia sighed in frustration, adding:

“You know what would be cool, Mom, is if we took all of those signs down and just put up ones that said ‘Vote Yes for Jesus.'”

Wouldn’t it be great if we had a campaign for Jesus that was as loud as the campaign FOR the casino and as vocal as the one AGAINST it?

Wouldn’t that be something?

Wouldn’t that be worth voting for?

Could we do that?

***
I welcome your comments here — no matter where you stand on this issue. Feel free to vote in my poll at the left of this post. Don’t worry. I won’t know who you are when you cast your vote! 🙂
God bless you! And let’s find new ways to unify before and after the Sept. 23 election!