It’s freshman year of university, and I unfold my mid-term grade report from the envelope, smoothing it out on the desk.

I am the girl of Honor Rolls and Homecoming Courts and shoes to match every sweater in my sorority closet. I seek the “A” on my report card, and the “A” in life. But today, I find this fat D+ on the grid of my mid-term report. I am nearly failing math, and I take it personal. I feel a single letter wrap its whole self around my identity, and I become the D+.

I’m the woman in the newsroom, and the columnist’s job opens up. I apply, and so does Rainbow Rowell. We were two rookie reporters, twentysomething word-cousins, and she gets the job, while I’m stuck schlepping City Hall stories. And it doesn’t matter that the city beat is a prestigious one, or that I’m landing stories on the front page almost every day. I can only see the holes — I can’t stop measuring myself by what I didn’t get. And who I wasn’t becoming.

I saw only my own deficits.

I run my finger along the fringes of my life story, and how I’ve been too quick to see the tarnish — the jobs I didn’t get, the communities that didn’t have a place for me at the table, the yardsticks that read “failure.”

I see, too, the places where I’ve yielded to my own successes, letting my good performances take a commanding position in my heart — as if the best parts of me could fit into my resume.

I see how all of that — all of it — is tangled with an idol, this idol of wanting to be liked and seen and approved. To be known. 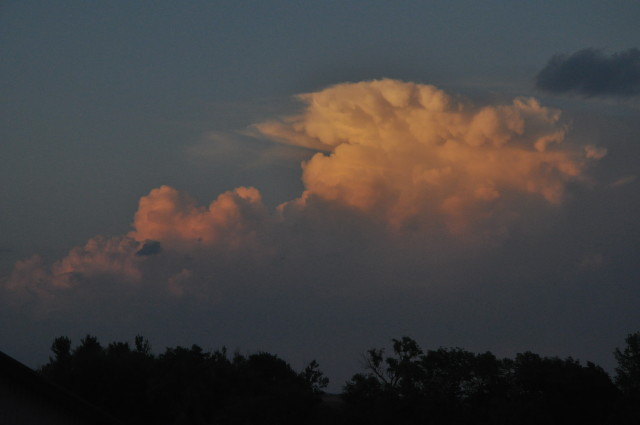 We don’t want to be what the culture is selling.

We want to be content with who we are, but then again, we want to be more than who we are. And if we’re standing on a bathroom scale, we want to be less than we are. We feel as if we’re too much or not enough. And a woman can never find contentment in who she is if she’s looking over her shoulder at who she’s not.

How easy it is to believe what we don’t really believe: that our value lies somewhere out in the lists of who’s who. Even among Christians — despite what we know in the depths of ourselves — there is great enthusiasm for being noticed, perhaps at the expense of the quiet acquisition of virtue.

We can make rankings a religion.

Chuck Colson said it like this in 1984: “The church is in almost as much trouble as the culture, for the church has bought into the same value system: fame, success, materialism, and celebrity. We watch the leading churches and the leading Christians for our cues.”

Decades earlier, A.W. Tozer wrote these words: “Promoting self under the guise of promoting Christ is currently so common as to excite little notice.”

This is not only a contemporary issue, but a deeply ingrained human issue. Even the disciples wanted to know who could sit next to Jesus in glory.

And God is whispering down through the millennia, to all of us, asking us to yield ourselves to Christ, for His sake. For this one life. For His glory.

Can I hear Him whispering today? Can I see Him offering His yoke, right now?

He’s extending an invitation, this moment, to all of us. An invitation to focus on the inward life, hid with Christ in God. Yes, the pixels flash and the gloss glares with a tired message: Be more, climb higher, get bigger in this life.

There’s a better way. There’s the way of Apelles. 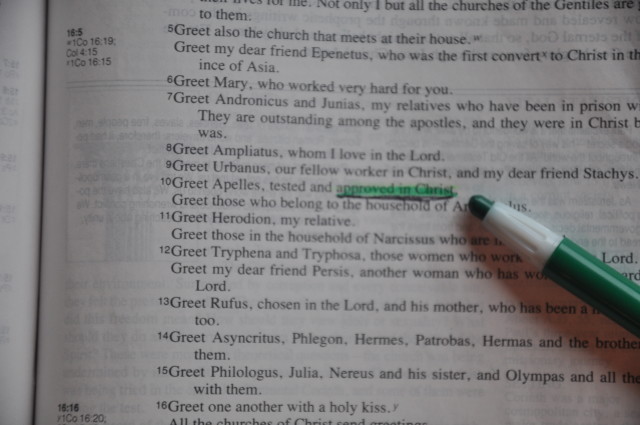 I found Apelles in Scripture, during the quiet days of writing a book about approval and identity. It was the happiest accident, when Apelles met me in my living room.

Find him there, my friend, right there at the tail of Romans. But don’t blink, or you might miss him. His name is plopped, unpretentiously, in the middle of the list — neither the first nor the last.

Apelles is us — dwelling in the ordinary middle.

That’s it. No other mention of Apelles in all of Scripture.

Paul goes on and on about a whole lot of other folks, about how they were good workers, faithful servants, dear friends, and “outstanding among the apostles.”

But Apelles? He’s not the star here. He’s not the winner. At most, he’s the Honorable Mention. He merits only five words: “Tested and approved in Christ.”

But I drew in my breath when I read it. They may be the most important words of all. Those are the life-changing words: tested and approved in Christ.

That morning, my fingers flew across the computer keys, as I tapped these words into a manuscript, words that later made their way into the final pages of a book:

“His name appears once, and only once, in Scripture. This is all Apelles will ever be known for, that he was ‘approved in Christ.’ And in the end, it may be all that really matters.

He was Apelles the Approved.

I wonder often about Apelles’s earthly life. He may have been the nobody in the back row. Or he might have a been a big somebody who preached about Jesus among crowds in Rome. Apelles may have fought the same battle we’ve been fighting. He may have, at times, been jealous or envious, or wished for a greater mention by key Christian leaders like Paul. Maybe he felt unloved by his parents. He may have fought approval until his last breath. …

Scritpure does not reveal a single act of human bravery or personal accomplishment on his part, unlike his peers whom Paul mentioned.

How often did Apelles have to fight the urge to compare himself to his well-knwon contemporaries? Did it come easier for Apelles than it does for us? Was Apelles so secure that he never tried to please others, to stand out, or to make a name for himself?

I won’t know on this side of life. But on the other side of forever, when I come into glory, I want a lunch date with Apelles.

Maybe he will tell me that he lived out his days satisfied what Christ’s love and approval were enough. I am sure that Apelles will tell me that, in the end, he had the only stamp of approval that really mattered.” 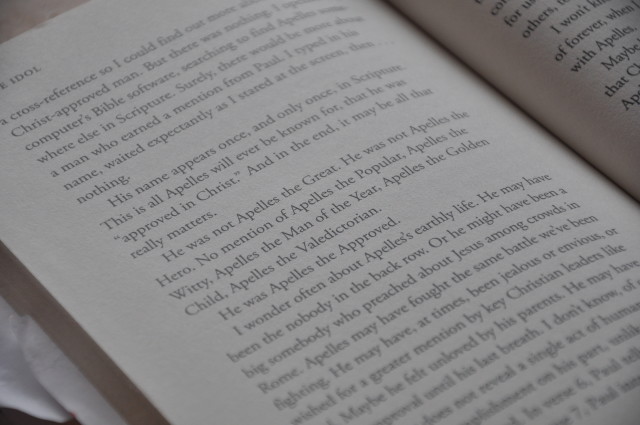 What if we became the Apelles Generation?

What if we became the generation that said enough to the not-enoughs, and to the lists and to the tiresome rankings? What if we would patiently acquire virtue, while forgoing the lists and trophies, in anticipation of the “divine accolade”? What if we remembered that the only approval that really matters? Is God’s.

What if our own epitaphs read like that of Apelles:

“[insert your name here], tested and approved in Christ.”

Not the approval of our readers or our publishers or our peers or our pastors or the ones at the cool kids’ tables. Not the first-place finishers, or the people who got what we wanted.

We could break from the patterns of the world. We could stop making a religion out of rankings. We could refuse to put our worth in the bank of our accomplishments. We could live like Apelles, invested in Christ.

Apelles, in the Latin, means artist. He was the artist approved in Christ. And in Greek, the name means “excluded and separated.”

Could we willingly be excluded? Could we, artists and writers and mothers and preachers and ordinary, everyday pilgrims — could we willingly lay down our lives for a life separated with Christ — a life hid in Christ with God?

And there, we would find the only approval that matters. And we would know it with certainty —

that it’s the approval we always had.

Lord, we ask you: Make us the Apelles Generation.

Make us about the cause of Christ.

Break any resume, platform, microphone, report card, accomplishment or act of service, if it does not bring You alone glory.

We are the Apelles Generation. Strip us of any desire in our crowded hearts to be known or applauded. Don’t let us get paralyzed by popularity or praise. Make each of us a modern-day Apelles, content with being approved in Christ alone. Have us repudiate our own self-interests.

Make us servants. Make us holy.

Don’t allow us to overlook the overlooked. Take us to dark corners. Give us aprons and basins.

Because we don’t want to get to heaven and find out that for everything we ever said or wrote or preached or Tweeted, that we missed out on the chance of serving you. Of kneeling beside. Of washing the feet of a King.

Of being known as a window to Christ — tested and approved in you. 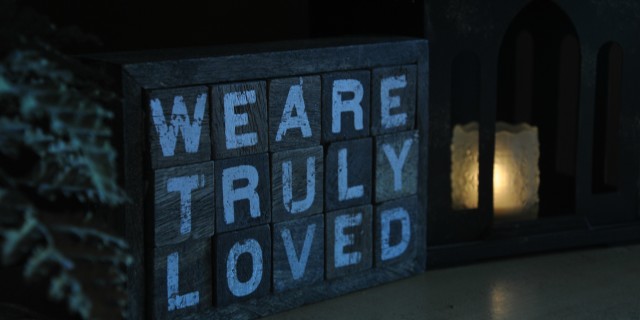 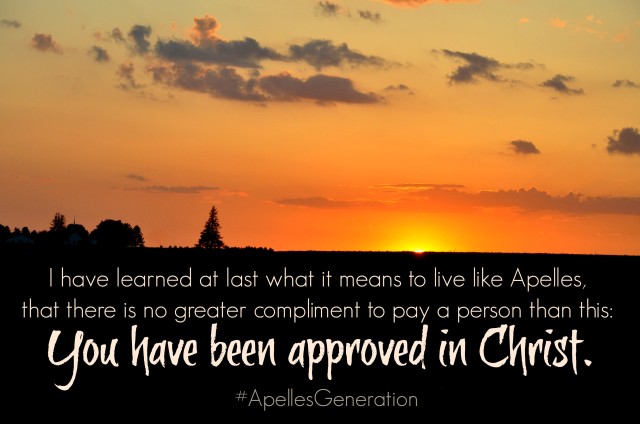 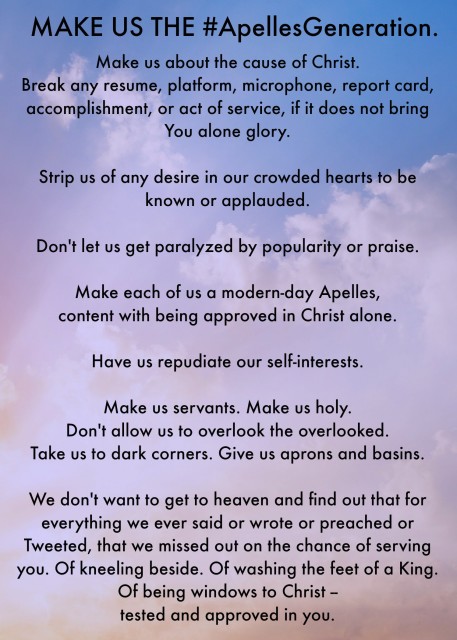