During 2013, dozens of talented writers are joining me to cheer you on in your storytelling. These guest-writers will share a few helpful words with you right here every Tuesday night, to encourage you as you #TellHisStory. (Come back after midnight to link up your story by clicking here.) And now, I’m delighted to introduce you to my longtime friend, the very talented award-winning journalist, Colleen Bradford Krantz.

Several years ago, I hung a small black sign in my office. It featured an Emily Dickinson quote: “Dwell in Possibility.” I hung this where I would see it when I sat down to write because I had grown frustrated with how my writing style or tone would shift slightly when I knew I was writing for others.

I had trouble trusting my “voice,” trusting my plans for where my book or script was going. Or sometimes, I’d simply get stuck. The sign became my reminder to focus on the long-term vision, to ignore the doubts, and instead picture the final book or video as I had first imagined it.

It is so easy to get lost in a single frustrating paragraph or chapter. When I remind myself to “dwell in possibility,” I am able to take a step back, gain some insight and move beyond a tricky writing problem. Perhaps as importantly, the sign is a reminder to be open to other avenues, new possibilities, for how I might get a particular story to an audience.

The beauty of today’s world is the many options for stories. If a story doesn’t work as a book, might it be fitting for film? For a photo essay? For an online literary magazine? We carry on the traditions of Dickinson and other writers of the past, but we no longer face the same boundaries. Embrace that. 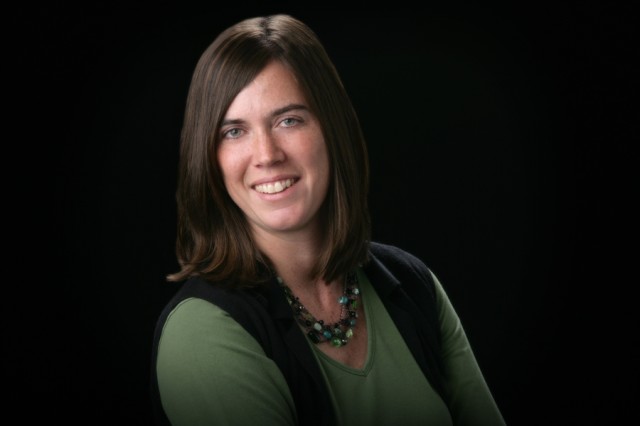 Colleen Bradford Krantz is an independent journalist, author and documentary filmmaker. She wrote and co-produced the award-winning television documentary, “Train to Nowhere; Inside an Immigrant Death Investigation,” nominated in 2011 for a regional Emmy award. Her non-fiction book of the same name (Ice Cube Press, 2011) was the starting point for the film. Before becoming an author and filmmaker, Colleen spent a decade as a newspaper reporter. Last year, she founded Skewed News Tutor, a startup which creates multimedia tools to illustrate how a reporter’s preconceived notions or personal feelings can slant a news report. Learn more at www.ColleenBradfordKrantz.com or atwww.SkewedNewsTutor.com. Follow her on Twitter @BradfordKrantz or @SkewTutor .