This week’s featured storyteller is Leslie Leyland Fields, an award-winning author of eight books and a contributing editor for Christianity Today. She’s giving away TWO copies of her latest book, Forgiving Our Fathers and Mothers: Finding Freedom from Hurt and Hate.

Does Forgiveness Reach All the Way to You?

Do you know you are forgiven—of everything? Then what is that load you are carrying, sister? May I help?

We know the theology of forgiveness already. We know that “forgive as we’ve been forgiven” is to make us an outward-looking, forgiving people. Forgiveness is not to be hoarded as our very own treasure.  Paul urges us, “Just as the Lord has forgiven you, so you must also forgive.” How else to say this? We have been forgiven that we may forgive others and live out the reckless, perfect compassion of a God whose love for the world and for us knows no bounds.

How far does this forgiveness extend? What of those who have suffered the most horrific offenses: murder, rape, destitution? Does it still hold up? Must we still forgive? The 2008 documentary film As We Forgive follows the path of three people in Rwanda, ten years after the 1994 genocide. One man killed another with a machete in the maelstrom of the Hutu-Tutsi annihilation. Ten years later, he is in the presence of the murdered man’s daughter, unable to look at her, consumed by shame and guilt. His only desire is to be forgiven by her. She has lost most of her family in the killings and has little desire to forgive this man. She didn’t even want to see his face, but over a period of months, through the encouragement of a Rwandan mediator, she agreed to see him.

The camera does not lie. When they meet, her face is troubled; she is angry, deeply unnerved by his presence, which painfully resurrects all the murdered members of her family. She cannot forgive. We understand. Over weeks and months, she continues to meet with a mediator.

In the end, the camera catches her bright face as she joins a group of men and women and children carrying bricks to build a new home for another victim of the genocide. Through months of talking, praying, she is forgiving the man who killed her father. She is beginning to smile again.

Is that really possible? But you may be stuck at the starting point, thinking you are beyond forgiveness yourself. Something you’ve done, something that’s festering in a dark pocket in your heart. I don’t know what you’ve done, but I know what Peter did, the disciple who loved Jesus most passionately. Peter, who dropped everything—his job, his friends, his family—to chase after this strange man, Jesus.  After three years of witnessing the most astounding healings and teachings, after declaring his undying commitment and love for the man he had come to believe was the Son of God, after vowing to follow Him to the death, Peter abandoned Him the very night he was needed most. Terrified for his own safety, he said, “I don’t know that man” not once, but three times, the last time in the hearing of Jesus Himself, who looked straight into his eyes while being led away to die. He chose his own small life over the Son of God’s life. Three times.

That’s us. We’ve all denied Jesus. We’ve all turned away from him at key moments and in pathetically trivial moments, when nothing was at stake. We’ve turned away from one another. We’ve denied one another. We are all guilty. But if the one with the greatest responsibility and knowledge can commit the worst sin and be forgiven—so can you. Don’t be stopped by your own failings and sin. God knows all about them. God’s taken care of it. Whatever you did, or think you did, it’s gone, gone. Believe it. Walk in the freedom He has already given you. That He keeps on giving you. 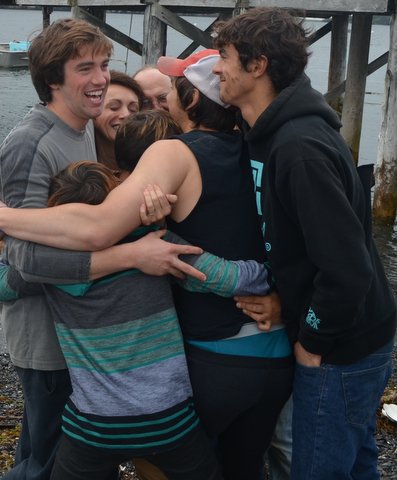 Believe this not just for yourself. Believe it for the sake of others. It will be hard to forgive others until you really understand how entirely forgiven you are.

This is who we are, women. We are a found, forgiven, and celebrated people given full freedom in Christ that we may live a God-ward life of mercy toward all, a life of feeding others. That’s the job Jesus gave to Peter after forgiving him. You  remember the scene. Three times:

“You know that I love you!”

Again and again. Jesus forgave Peter not simply to free him for his own sake, but for others’ sake: “Feed my lambs.”

Our forgiveness comes with the same call to action:

Do you love me?

Forgive as you have been forgiven. 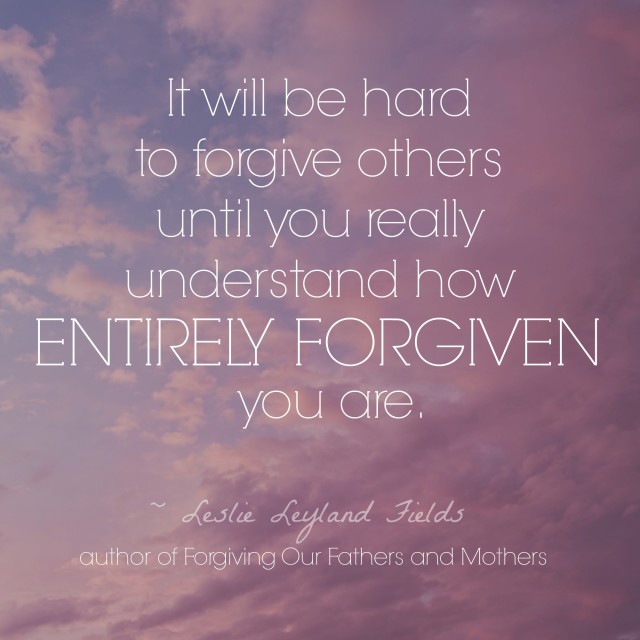 Leslie Leyland Fields is an award-winning author of eight books, a contributing editor for Christianity Today, a national speaker, a popular radio guest, and a sometimes commercial fisherwoman, working with her husband and 6 children in commercial fishing on Kodiak Island, Alaska where she has lived for 36 years.

Her latest book is Forgiving Our Fathers and Mothers.

HOW TO ENTER THE GIVEAWAY

Leslie is giving away two copies of her book, Forgiving Our Fathers and Mothers: Finding Freedom from Hurt and Hate.