For most of 2013, authors joined us in this space to offer words of encouragement to writers and communicators. That series has ended, but I am excited to announce a new storytellers series.

I have invited authors to share their stories and/or books with us. You’ll find us gathering here every Tuesday night to tell stories about faith and life.

Our stories have the power to change the world, one paragraph at a time. And I want to be a part of spreading the message of great storytellers in our midst.

So, then, this series: The #TellHisStory Storytellers Series.

I Love You
by John Blase

So this bell calls us all…

It was Sunday morning coming down in Phoenix. I was there on business. My wife called that morning saying they don’t think Dad’s going to make it. I need to go. A little while later the cell phone rang and her voice held two words: He’s dead.

Her dad’s name was John. He’d been fighting pancreatic cancer. Then pneumonia crept in and he was just too weak. The writer Barry Lopez describes your death day as the day “the river calls your name.” That Sunday the river called John’s name.

My wife told me I got to talk to him…they put the phone to his ear and I said I love you, Dad. For that I am thankful. When someone dies alone, all they hear is the river, and while it’s possible you might hear angels or harps, I would think it could also be frightening, cold, lonely. But in addition to whatever sound was in my father-in-law’s ears was a daughter’s voice: I love you, Dad.

As I flew back to Denver, she flew out to Arkansas. She called again. My voice carried four closing words: I love you, Meredith.

Psychological literati skewer that “I love you” phrase, saying if you don’t really feel it, you shouldn’t say it. That’s about the stupidest thing I’ve ever heard. You don’t say it because you’re trying to get the inside to match the outside; you say those words because the river always flows and you never know when it might call your name or the name of someone you love. Saying “I love you” is insurance; to not carry it is the stuff of which regrets are made.

One of the most precious human gifts we give one another is to do what we can to ensure others know the grace of our intentions, that we intend to be loving and kind even when we may not act like it or feel it. That’s the reason I strive to tell my wife and my kids I love you every day, without fail. Because you never know what any given Sunday may bring.

~ an excerpt from Know When To Hold ‘Em: The High Stakes Game of Fatherhood by John Blase

John Blase is the author of Know When To Hold ‘Em: The High Stakes Game of Fatherhood (Abingdon 2013). He is also a poet who practices the craft at www.thebeautifuldue.wordpress.com. He lives with his wife and three children in colorful Colorado.

We are giving away a copy of John’s wonderful new book, Know When to Hold ‘Em. 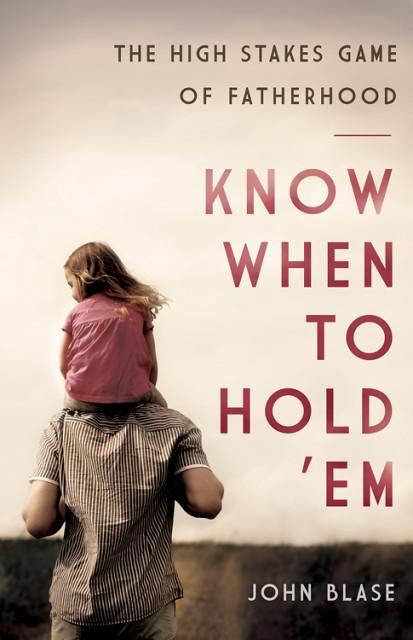 To enter, tell us about your dad or a dad you admire. Or simply let us know that you would like to be entered in the drawing. I will randomly choose a winner by Friday at noon (CT) and notify him or her by email.

This book is for anyone raising and loving tiny humans. Indeed, it is for anyone who has experienced the joy — and heartache — of family. Highly recommended. Five stars.