Sometimes, the miracle is faith itself —

– that people would believe in spite of the suffering.

– that Christians cling to the truth when the world tells us the anchor won’t hold in the storm.

– that we stand firm, when the world says our faith is a lie, pointing to this rancorous world for their proof.

That’s what I’m thinking when my husband calls to me from his recliner in the living room, just before the 10 o’clock news begins.

He mutes the television, lets out his breath in one long sigh, and turns his head to find me, standing in the doorway:

“Jennifer, I just now realized that sometimes, there’s no point in watching the forecasts. I really don’t need to do this anymore.”

This, from a farmer who studies the radar like some people study the Olympic-medal rankings.

This, from a farmer who has prayed long and hard for rain.

But for our cornfields, it is too late for rain. It’s too late for the fields of thousands of other farmers, too. Our fields are not a loss, but the damage done is irreversible. Even a downpour couldn’t fix what’s happened.

My farmer-husband pushes the OFF button; the TV screen goes black. He leans back in his chair and puts his hands behind his head, weaving all his fingers into a hammock to hold his quiet deliberation.

But he says it again, here in a quiet living room: “God’s still got it.”

Good theology doesn’t evaporate — even if faith gets bruised — because truth is still truth. God has still very much got it. Our Gospel is not rooted in prosperity, but in a place of suffering: the Calvary cross.

The Christian faith is not about getting one’s way. Even if our resolve is dented, our God is not. In drought, or storm, or cancer, or death, God still is.

Faith is not believing in a false promise of prosperity, but in the abiding presence of Christ. 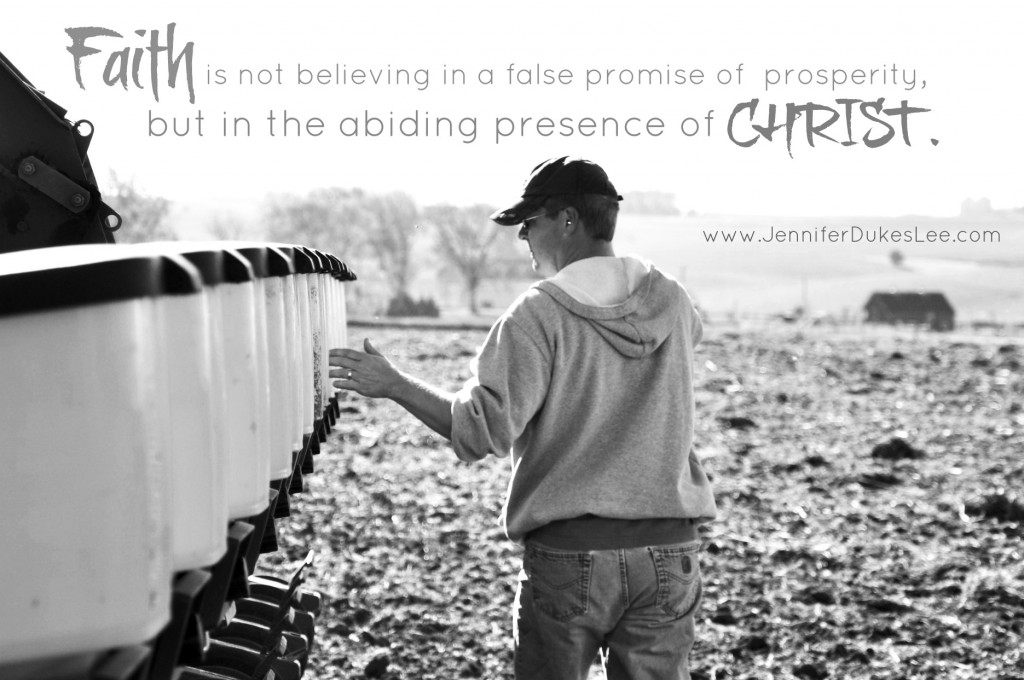 We go around our house — and this blog — talking about God-incidences, those serenditious moments that some folks call “coincidence.” But not every God-incidence is wrapped with a pretty bow and shiny paper. Some God-incidences downright hurt. Seth Haines said it this way a week ago: “Sometimes, the providence is in the pain.”

What if the most valuable God-incidences in life were the things that actually hurt? And what if the pain lasted a very long time? It happens like that for people. A lot.

Can a Christian still believe under those conditions?

Can we really carry our crosses? Or is it just a nice philosophy to repeat from time to time on Sunday mornings?

I have to ask myself that question every single day.

When we do live like we believe — and I know this is really only possible through the power of the Spirit — I think that this is the essence of a miracle. God gifts us with faith in the unseen. This is why a farmer can plant seeds, not knowing if they will bring a harvest. A farmer’s work is God’s way of reminding us that great miracles can grow from something impossibly small. 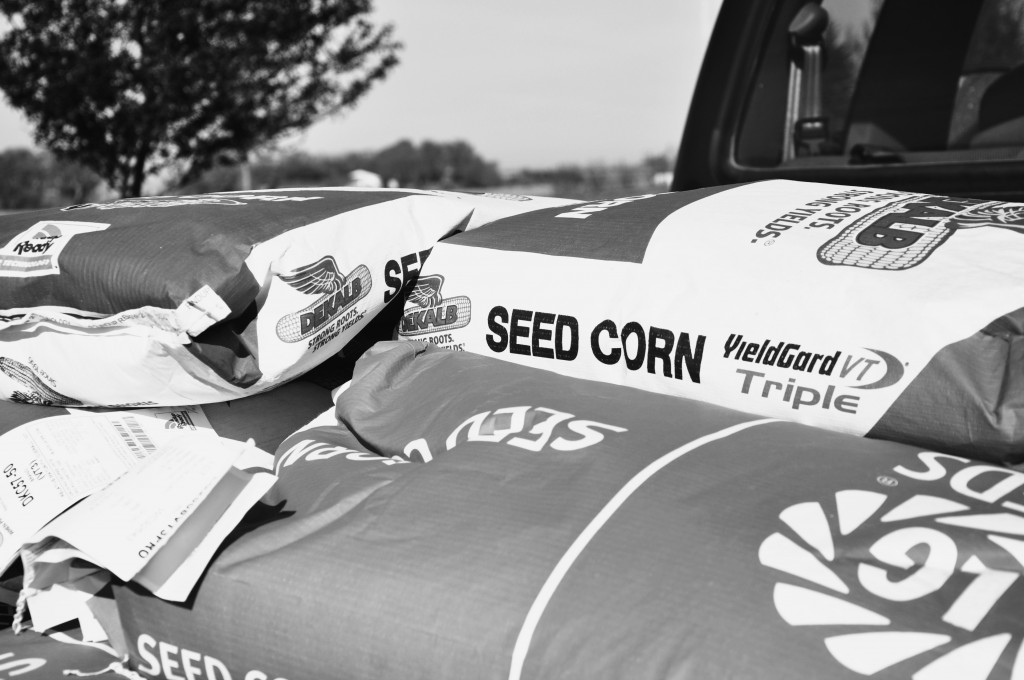 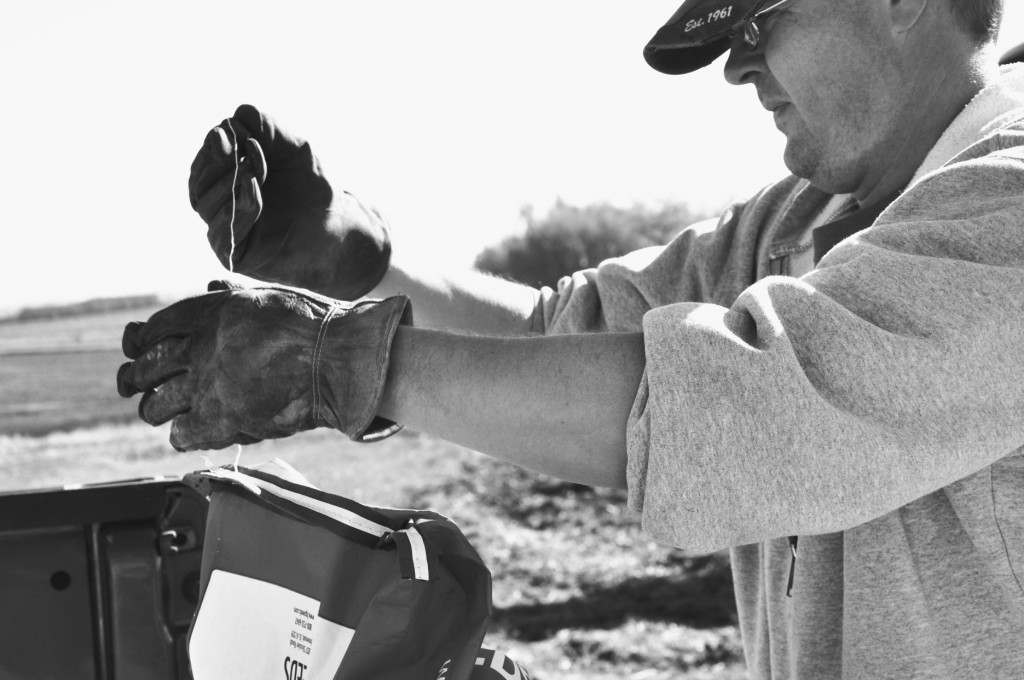 Yes, something CAN grow from the seed. But it doesn’t always happen that way.

And a Christian man can still believe — even praise — in spite of the worst.  God never said he’d grant His people fortune, but He did give us faith.

We said it weeks ago on this farm: If it rains, or if it doesn’t rain, God still reigns.

On a dry night in August, My husband reaches  for a book on the end-table: “Gospel-Centered Discipleship” by Jonathan K. Dodson.

And not a single drop of rain falls.

The next day, I open my husband’s book. I don’t know which page he was reading, but my eyes land here:

Faith itself is a miracle, isn’t it? That someone still believes when life is a worst-case scenario? Like this —

— when the Son of God decides to spend 40 days, as a human, with the Devil breathing down His neck. Yet he still trusts in the promises of the Father.

— when a woman prays the most furious, heart-bending prayers. Her prayers do not end with a cure, but with a casket. Yet she still believes.

— when he’s standing in the unemployment line, kneeling at the hospital bed, singing hymns in a concentration camp. All of them, miracles.

— when Christ endured the cross for the joy — the joy! — set before him.

It all seems just a tad-bit crazy to a world that watches us. That we would put our faith and hope and trust in a bleeding, dying King? The cross makes no sense, some might say. But we say: Without the cross, life makes no sense.

To some, the message of the cross is foolishness. 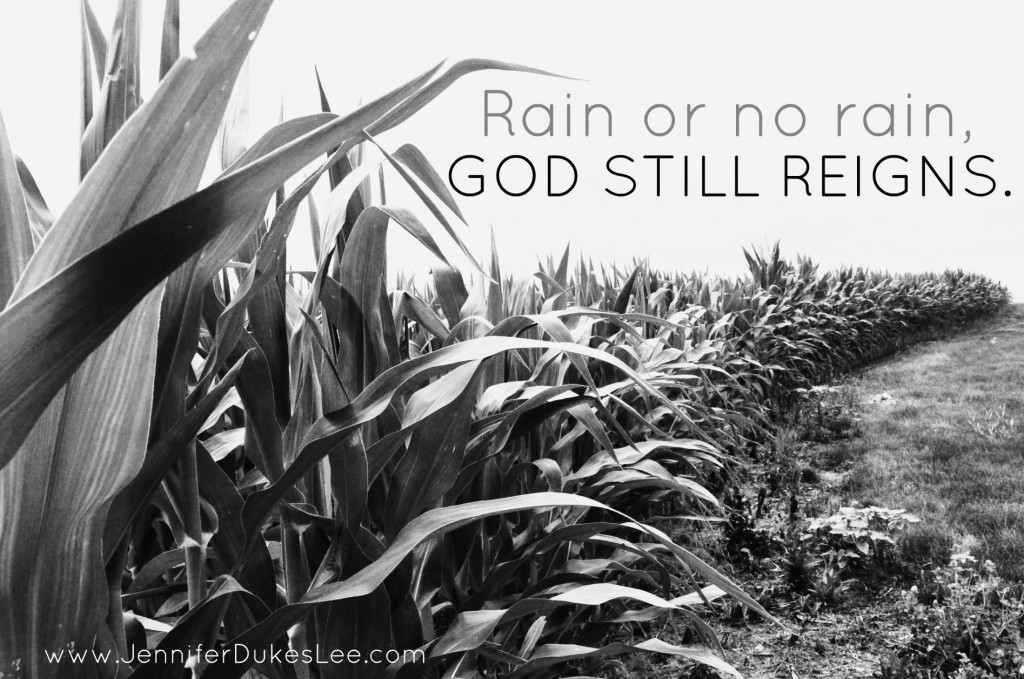 Here for God-Bumps & God-Incidences? Add a button to your post, and link below…