It started out innocently — this picturesque moment with the Easter Bunny.

The doorbell rang, just as my husband was pulling the ham from the oven. I looked past a table covered with china and crystal (and purple Peeps) to see a costumed guest waving at me through the window.

They raced for the door. Anna arrived at the doorway first, starstruck by a cartoonish bunny with floppy pink ears and a yellow bow-tie. 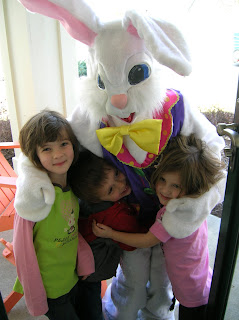 Lydia watched from a distance, shooting knowing glances at me while her little sister went gaga over the Easter Bunny. We raise our children in the Christian faith, but truly, I think Anna would have told Christ Himself to wait His turn if He had showed up in the flesh on the doorstep on Sunday afternoon.

For this moment, it was all about The Bunny.

Anna and the Easter Bunny shared repeated hugs. The rabbit — who uttered not a word — held furry paws over a buck-teeth grin and silently “giggled” at Anna’s stories. Anna and Bunny posed for pictures, taken by Bunny’s “bodyguard,” who (just between us) is also the Bunny’s boyfriend.

This was perfect, so it seemed, and we documented every moment.

This was one for the books. Until Easter Bunny hopped away. That’s when things got ugly. I had seen it earlier, this telltale tuft of ponytail peeking between fabric on the back of Bunny’s head. 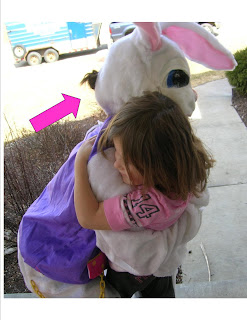 Anna caught a glimpse of it, just as Bunny turned to hop down the sidewalk.

Next came a look of horror, then an accusing glare at me. Was I — her own mother — in on this: The Great Bunny Conspiracy of 2009?

“Mommy, that is NOT the Easter Bunny. That’s a person,” Anna said as she waved an accusing finger. “I saw hair on the back of that Bunny.”

“Oh, honey,” I grasped for words. “Are you sure? Maybe it was a brown patch of fur.”

Furthermore, she asserted, “that bunny’s costume smelled bad.” (“Elf” fans, remember this line: “You smell like beef and cheese; you don’t smell like Santa.”)

Anna and I discussed the possibility that the real Easter Bunny had dispatched helpers to visit especially good children like her. And we talked through a number of other (weak) possibilities for which I grasped.

Nothing worked. Anna surmised this: “That Bunny tricked me.”

This was it. It was over. My oldest child, only 7, had already given up on the fantasy. And now, I was about to lose my 4-year-old to a heavy dose of cynicism.

All because of an errant ponytail — the hair of the hare.

Then came this, a glimmer of hope.

“It’s OK, Mommy,” she said. “Because the real Easter Bunny is in his cave, and he’s coming to see me next year.”

I have one year. Could be my last.