Does Santa Believe in Jesus? I Called To Find Out.

We don’t have billboards here in Inwood.

But we do have a barrel in the middle of Main Street that announces potlucks, soup suppers, the bank’s open-house celebrations.

I steered around the barrel, looked in the rear-view mirror and asked Anna: “Should we go see Santa tonight?”

“Yea, sure,” she said. Her voice lacked its usual holiday sparkle. “I guess so.”

“You GUESS so,” I responded, turning toward the country road that led home.

I didn’t say anything else, but figured this was it. This was the year she’d tell me she didn’t believe in Santa anymore.

She’s only six. I think I was 17 or something. I know I was older than most, because I distinctly remember being offended for years at the song, “I Saw Mommy Kissing Santa Claus.” The nerve of that mother, hanging out under the mistletoe with another man while the father snoozed upstairs.

These days, kids are onto things way earlier.

I parked the car and hauled groceries inside.

She followed me and dropped two grocery sacks on the floor with a thud. She put her hands on her hips.

Yep, this was it.

“Mommy? I know all about that Santa in town.”

“You do?” I asked, lining soup cans on shelves, letting the question linger.

“Yes,” she said, lowering her voice to a whisper. “The man in town isn’t really Santa. He’s … an ELF, dressed like Santa.”

The way she reasoned, Santa’s too busy this time of year coordinating a worldwide toy-delivery enterprise. So he dispatches elves to take requests.

“And I’m going to give that elf a present,” she said, marching off in search of something to give.

On our way back into town, she spoke again: “Santa and his elves believe in Jesus, don’t you think Mommy?”

We lined up along the wall at the Community Center. Anna fished something out of her purse.

I got to thinking, maybe Anna was on to something. His ho-ho-ho did sound a little more like an elf than the real Santa’s.

It was her turn.

She sat on his lap, answered his questions, then pressed a palm-sized gift into his hand. He looked at it, thanked her, and gave her a paper sack full of peanuts, chocolate and a candy cane. 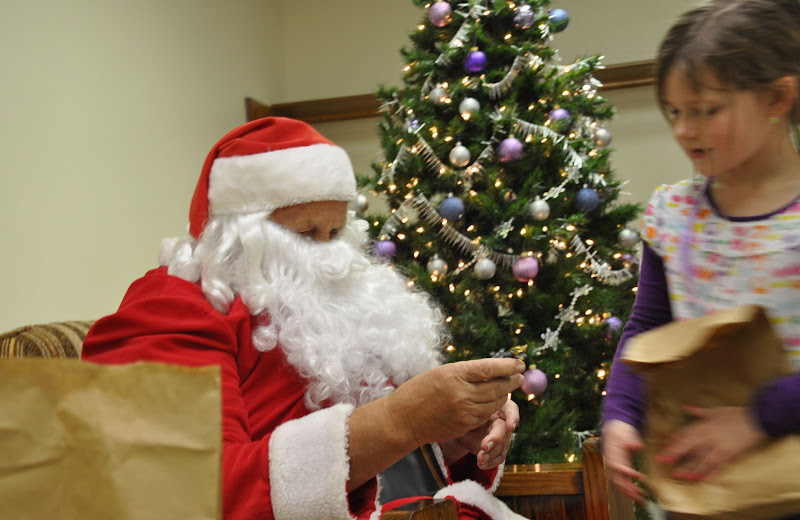 On the way home, our little detective offered more details: “That’s not an elf either, Mommy. It’s a real person. I think he might even live in Inwood.”

Come to think of it, he did look kind of like a man I’d seen around town.

I opened my eyes wide and gritted my teeth — a wordless warning to the wiser, older sister.

Anna didn’t seem too troubled. In fact, she seemed thrilled.

This morning, she said the red-suited man at the Community Center would definitely send word to the real Santa, who she is pretty sure is spending a lot of time at Macy’s in New York.

After the girls got on the school bus this morning, I decided to do a little detective work of my own. I opened the phone book, looking for the name of the man who looked like that guy in the red suit.

“Is Santa, er I mean, Serbutus there?” I asked. (I’m thinking that his name sounds suspiciously elf-ish.)

Serbutus picked up the phone, and I stammered over words, telling him I was the mom of the little girl who handed him a gift.

“Oh yes,” he said, then told me he’d left the gift on a table in the room, and was headed back this morning to pick it up.

Anna’s gift to Santa was this: a little cross with words engraved on the front.

Often, he says, he asks the children if they know the real meaning of Christmas.

“Most of them do,” he told me this morning. “Santa is visible to them. Jesus is a spirit. But they just want to sit on someone’s lap and let their desires be known.”

Before we hung up, I told him that my daughter had asked last night if Santa believed in Jesus.

And I got the official word, right here, straight from Serbutus the Elf: Santa most certainly does believe.

I can’t wait to tell Anna. 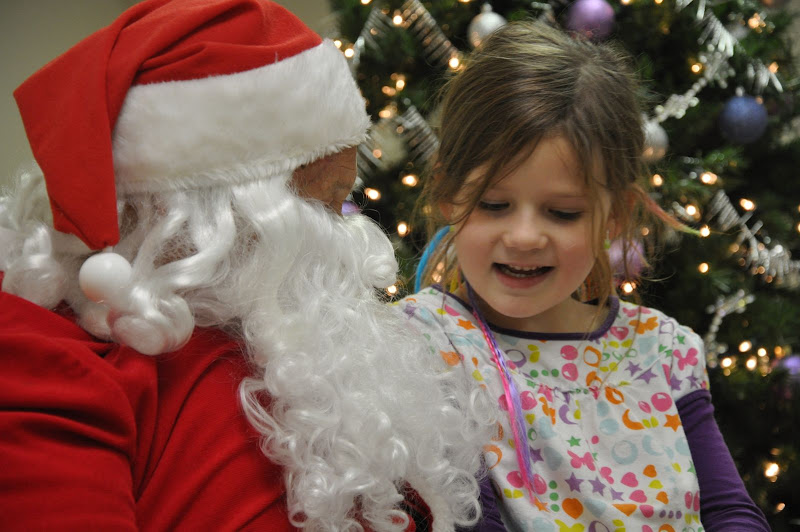