Because Of The Story (Why We Blog, Part III)

I can’t remember a time where I haven’t written.

I started writing stories as a grade-school girl. I began writing news when I was 16 years old. That’s when I started writing neighborhood news for the local weekly. These were the stories where you learned that Hazel and George had the neighbors over for Sunday coffee. Or where you found out that the pastor’s wife would be hosting circle and planned to serve ham-salad sandwiches. The neighborhood news was the most well-read part of any small-town newspaper. Still is. (That, and the obituaries.) 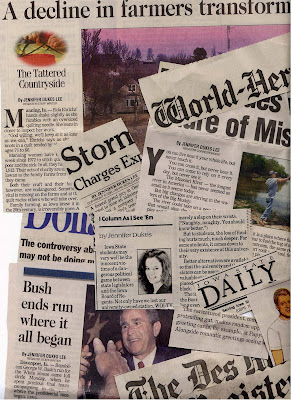 In freshman-year of college, I joined the newspaper staff. I had an opinion column with a cheesy title: “I Column As I See ‘Em.” I served as editor of the college daily for one year. My time as editor was marked by one controversial story after another: protests, sit-ins, accusations of racism directed at university administrators.

Meanwhile, the paper was entangled in disputes with the college president over our refusal to back off the coverage. (We didn’t.)

1993 — I learned a lot about the First Amendment that year, skipped more classes than I attended, and smoked a lot of cigarettes while bawling my eyes out on the loading dock behind our newsroom.

But I didn’t quit writing. I wanted to tell a story.

I graduated from Iowa State in 1995 and took a job covering crime at the Omaha World-Herald in Nebraska. I covered the shooting death of a police officer — who was about my age at the time. I went on stake-outs and drug raids with local officers. And I saw far too many 14-year-old boys in caskets. Their gunshot wounds were disguised by putty in the capable hands of morticians who were accustomed to this sort of thing.

1995 — I learned a lot about mortality that year … and I smoked a lot of cigarettes while bawling my eyes out on the deck of my one-bedroom apartment.

But I didn’t quit writing. I wanted to tell a story.

I took a job at the Des Moines Register in Iowa a few years later. I covered the Y2K disaster-that-wasn’t, the state’s methamphetamine crisis, and the Bush-Gore presidential race (with its hanging chads.)

When I was a few months pregnant with our first daughter, I drove east to Indiana to cover the execution of Timothy McVeigh. That year, I also covered tornado-ravaged cities, college-tuition hikes and one man’s attempt to eat a five-pound steak.

2001 — I learned a lot about what mattered most that year. With baby curled inside, I stopped smoking — but I still had plenty of good cries in the yard out back. Those were the years when I covered the death of family farms in Iowa, the Sept. 11 attacks, and the murder of an Iowa toddler.

Horrid as it was, I didn’t want to quit. I wanted to tell the story.

And then I quit news. Just. Like. That. I quit.

But the story didn’t end.

Newswriting is a noble calling, indeed it can be a high calling. But I needed to set the pen aside for a time. I needed to pause for a time … and just listen.

Now let me get something straight: Writing is hard for me. It is really, really hard for me. I’ve written thousands of news stories, and it still isn’t easy.

For me
Writing is a tug-of-war with words
that don’t come easily
I grip at a sentence like it’s a braided rope.
I pull at it,
and I strain over it,
and I brace against the pull of it,
and in exhaustion, I often let go.

And most often, in the letting go,
I find the answer …
in the freedom
of having let go.

Why do I blog? I don’t know. I honestly don’t know. And I’m OK with that. This is a process of discovery.

For the first time in my life, I have no idea why I’m writing. There is no paycheck, no editor to tell me “job well done,” no front-page story, no police-scanner attached to my hip, no press conference to attend.

But I have this: a letting-go of the rope that brings me closer to the One tugging me in.

All I have seen teaches me
to trust the Creator
for all I have not seen.
— Ralph Waldo Emerson

This is the third installment in the “Why We Blog” series. If you would like to participate by writing your own “Why We Blog” post, let me know via the “Contact Me” link or in the comments. I’ll link to you here at Getting Down With Jesus.

Participating in “Why We Blog” so far:

Sarah Lopez at “God’s Not Finished With Us Yet joined the “Why We Blog” crew today with her post and photo collage. She writes: “I blog because I have a passion that Christ has placed in me.”
mom2six at Treasures of Darkness, with her post.
Chrissy at A Pastor’s Wife … The Faith Journey. Here is her post.
Christy Rose at The Secret Life of an American Wife and Mom. Her post: “Why I Blog.”
Spaghettipie hosted a similar series at her blog last year. Here’s her contribution to this project.
Lyla Lindquist at A Different Story, with “Why We Blog: Blame it on the Grasshoppers.”
James Oh at Christian Walk Toward Destiny, with “Why We Blog”.
Valerie at Simply 4 God, with It’s My Blogoversary.
isumom at ISU and Other Life Details, with Why I Blog.

PHOTO: A collage of the stories behind the story.