Back In The Running

The last time I laced up my Asics for a run, the maples were undressing, dropping leafy garments on the ground.

I stepped out onto our country lane, and jogged past gilded fields where  combines would soon cut swaths through grain.

I felt the pain stab through my heel, intensifying with each foot-fall. I had to stop. I retraced my steps up the driveway and limped home.

As autumn stripped trees, my running season ended — almost as quickly as it began.

It was only ten months earlier, in January 2010, that I had agreed to do the completely illogical and marvelously ridiculous thing: begin training for a half-marathon.  Me,  the kid who was always picked last at recess, who never won a race, and who was the final kid to cross every finish line. Me, the mama who couldn’t have run to the mailbox and back without an ambulance on standby.

Yes, I would run 13.1 miles. I would do it for cancer victims. I would do it to raise money for the Leukemia & Lymphoma Society, to fight the cancer that took my husband’s farmer-father.

And I did, it. Five months later, on a cool May morning in Lincoln, Nebraska, I plodded on the pavement for real people with real hurt. I had no hope of finishing first, or finishing pretty, but I ran for the joy of it.

And I had a ball. Can you tell? 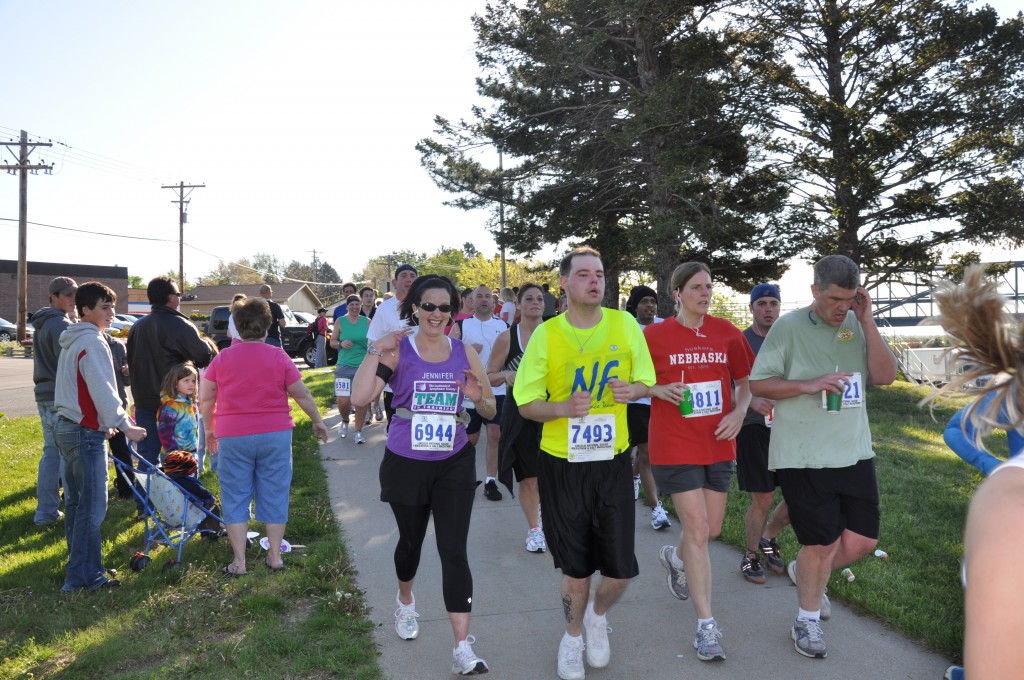 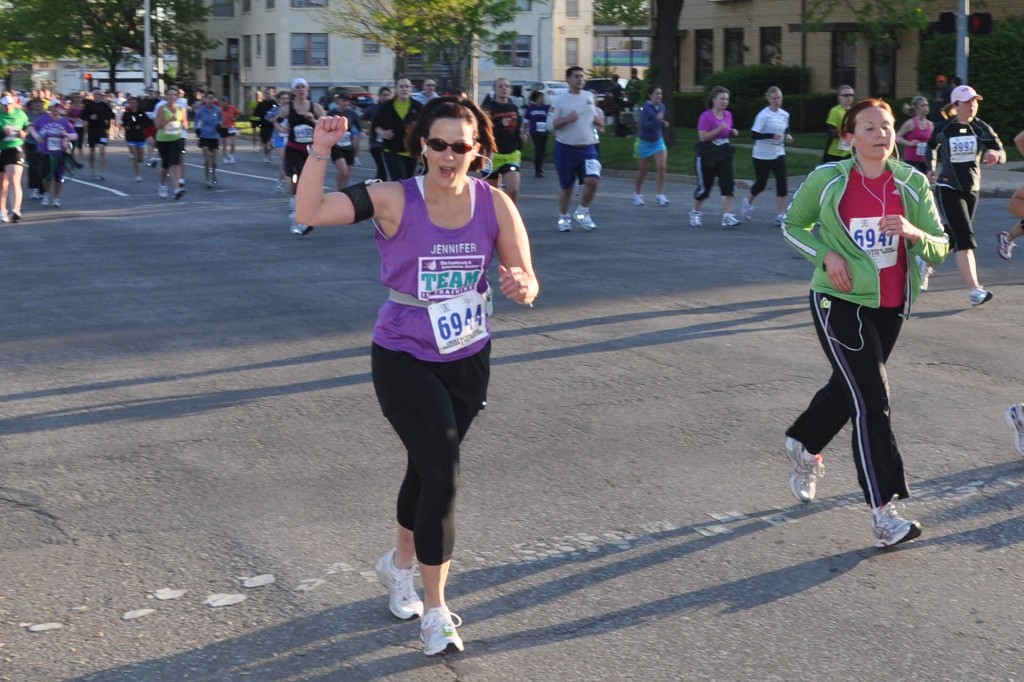 And then, a few months later, I did it again. This time, I invited a few friends along. 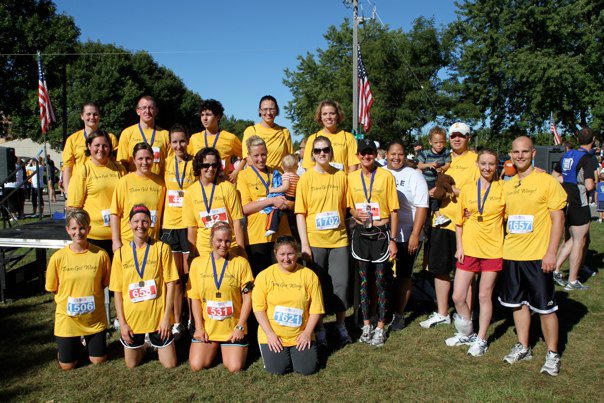 But on mile 11 of the second half-marathon, I felt the first stabbing pains in my left heel. I finished the run, claimed my medal and after a week tried to run a few miles. The pain worsened.

During a writers retreat with friends from The High Calling, I had my last good run, as the Texas sun rose over the canyon at Laity Lodge. But it still hurt, and this time the pain didn’t subside.

I tried to run once more a few weeks after I returned home from the retreat, and that’s when I had to turn back, limping home in the autumn of my running season.

A physical therapist told me I had plantar fasciitis. The doctors said it would take time. About a month ago, I was physically able to try again.

But I didn’t. I had lost my motivation.

I knew it would hurt.
I knew it would be hard.
And I knew that all the fitness I had gained last year would be gone.
I didn’t want to begin again, knowing that the old me would have been half a mile ahead, or more.

And then, on Thursday, I read what my friend and High Calling colleague, L.L. Barkat, wrote about exercise. She called exercise a miracle. A miracle!

And I don’t want to miss any miracles.

“@llbarkat I’m about to partake in a miracle, and thought you’d like to know. I’m headed downstairs to the treadmill. :)”

I stepped onto my very dusty treadmill, and began to run. Sloooooowly.

But even with the super-slow pace, I was dog-tired after a mere half mile. I was so discouraged, that I about started bawling.

I mean, eight month ago, I was running a half-marathon! And now, I couldn’t plod out a half mile without my lungs screaming at me.

Yes, there is great humility in starting over.

But I didn’t give up. Instead, I slowed the treadmill even more.

Right then, I knew that if I was ever going to be serious about running again, I’d have to stop chasing after the shadow of who I was, and just run for me, for today.

And then the day after that, I ran two miles again.

And then the day after that, I ran two miles one more time.

And today, after I hit PUBLISH on this post, I’ll lace up the Ascis, and I will run again.

I want to be a part of a miracle. I won’t chase a shadow of who I was, but I will take another step forward in who I am today. 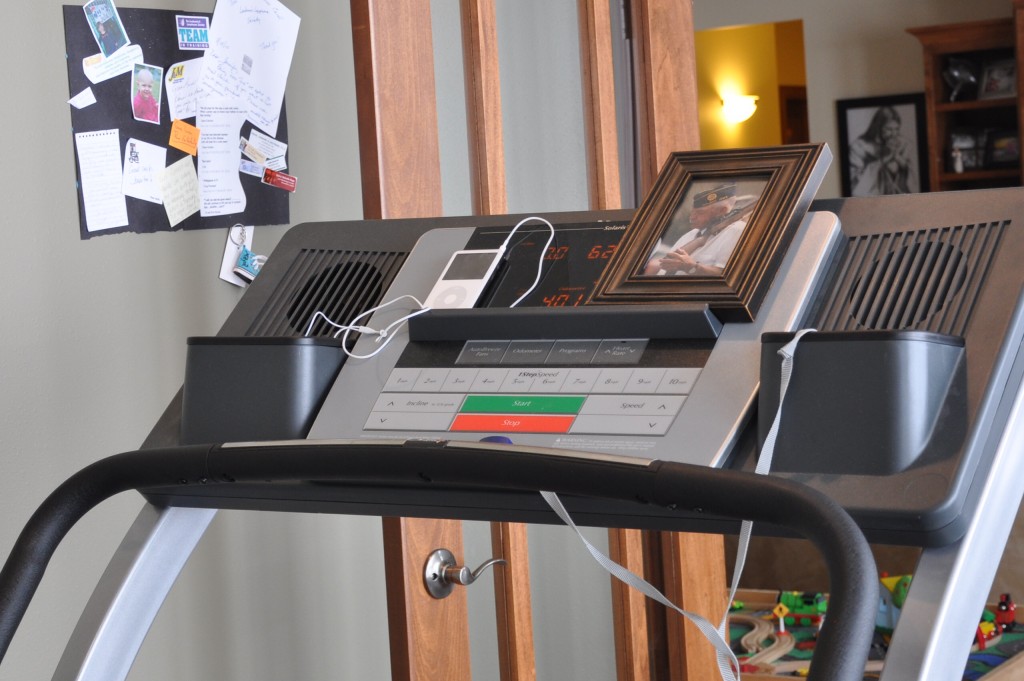 Linking up with Michelle. She asks us: What are you hearing from God in your life lately?