A Heart That Beats for Haiti 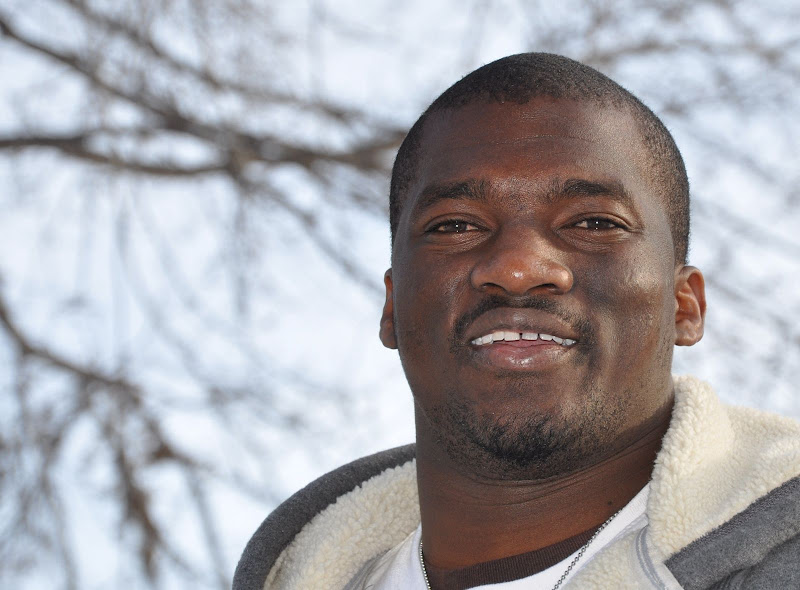 PHOTO: Claude Gillot, a 22-year-old freshman at Dordt College, is from Haiti. He is working toward a college degree so he can more effectively help his people in Haiti.

Sioux Center, Iowa — Claude Gillot shoves cold fists into fleecy pockets and shuffles through fresh-fallen snow on the sidewalks of the campus where I teach. He’s 2,000 miles from home, but even here where his breath comes out in white puffs, his heart beats warm and steady like this: Haiti. Haiti. Haiti.

“I can’t stop thinking about the children,” Claude, 22, tells me.

He was just a child himself when his country first needed him to be a man, when God first flooded his heart like warm Haiti sunshine.

He was just a kid when he began to love ferociously …
to love like Jesus loves.

As a teenager, he became a Christian. Soon after, he began to financially support an orphanage not far from his home village of Lafiteau, about 30 minutes north of Port-au-Prince. He left for Iowa in July to seek a college education here.

(Claude is a freshman at Dordt College, a Christian college in northwest Iowa.)

But he says, he didn’t leave the children when he left the country. He supports them financially, and they’re the reason he’s here in the first place — struggling through tests and textbooks to earn a degree. He wants to become a better man for them.

He knows the children’s faces and their names and the feel of their wee hands in his. He knows they’re hungry and thirsty, and that they need antibiotics and formula. He knows they’re sleeping in the backyard of the orphanage again tonight, because it’s not safe to sleep in that building with the cracked walls.

These are his people.

When one of the deadliest earthquakes in history rattled Haiti nearly a month ago, Gillot wanted to do just one thing: go home.

There were a hundred reasons not to go: How would he get there? How would he catch up with his schoolwork, hard enough as it already is? And what devastation would he find?

“At first I didn’t think it was a good idea for him to go,” said Jeaneen DeJager, the mother of his sponsor family in Rock Valley, Iowa.

This is what we mothers fear for our kids, even those who didn’t grow within us. “I was afraid of what he’d see,” Jeaneen said.

Because this wasn’t about Claude. This was about Jesus.

Less than 48 hours after earthen plates shifted under Haiti, causing one of the top 10 deadliest earthquakes in history, Gillot was on a southbound plane.

He drove to Omaha, flew to Chicago then to Tennessee, where he met up with a pastor. Together, they flew to the Dominican Republic. They caught a bus the next morning, but it crashed when a tire blew. Another bus picked them up, but the driver didn’t have a license to cross the border into Haiti.

Claude did not give up hope. His favorite verse: “I can do all things through Christ who strengthens me.” He trusted that Jesus would provide a way.

A man working for the government came by and drove Claude and the pastor to Port-au-Prince. There, they rented a car, and headed for his village to find Claude’s mother.

Claude found her outside her home, just after nightfall, with his brothers and sisters. They were too scared to sleep in the house, for fear it would collapse on them as they slept.

“They saw me and they just started to jump. They were so excited,” Claude recalls.

Even grown-up boys cry when they hug their mamas.

But the homecoming party was short-lived, Claude says, because he had work to do. “That’s the reason I came,” he says. “I had to help.”

So he kissed them goodbye, and got in a car and went to find the sick and hurting. He found medical help for a woman whose leg was trapped under the bricks of her home. He drove an injured boy to the doctor. He bought rice and beans for 300 people.

“When I left for Iowa, some of them thought I’d never come back, but I did come back,” Claude say. “I came to show them I care and I love them.” 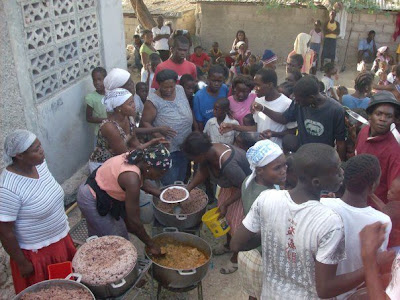 PHOTO (Contributed by Claude): Claude fed his village a few days after the earthquake struck.

Claude is back in Iowa now, taking classes like Modern Western Culture and History of Christian Confessions. He eats three meals a day, and sleeps under a roof every night.

But he doesn’t let himself get too comfortable.

When he lays his head on a pillow in Iowa, he thinks about those children who sleep under the stars. He sees their parched mouths.

He smells the stench of death.

“What Haitian people need now, the world cannot give to them. Only God can,” Claude said.

Mankind, he says, cannot live on bread alone. They need Bread of Life.

Claude was 17 when he became a Christian, stumbling onto this life-giving Christ. Claude was a hungover kid who showed up late to a church service in Haiti.

“I partied all night long. Drank lots of beers,” Claude recalls. “But I went to church that day. And when the pastor was preaching, it was like everything he said referred to me.”

“He said the only place you can find real pleasure is in Jesus.”

He stopped his partying that day, and a few days later, asked God to forgive his sins and change his life. He began to work as a translator for Mission of Hope, where the DeJagers first met Claude. He used part of his paycheck to support the orphanage near his village.

Yes, he says, he knows that his people need food and rice and shelter — now more than ever.

But, he says, they need Bread of Life and Living Water to nourish their hungry souls.

“You can give someone a cup of rice, but only God can give them what we really need,” Claude says. 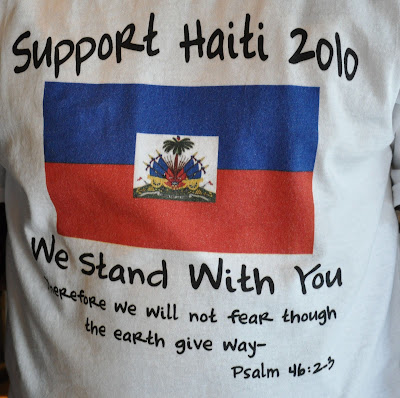 To find out more about Claude and his ministry, visit his Saving Ministries website at http://www.savingministries.com/.

Claude designed T-shirts (pictured above) to raise money for Haiti. The proceeds from the sale of the shirts will go directly to purchase food, water and other necessities for the people in his village. To inquire about T-shirts, contact Jeaneen DeJager at djhunter@mtcnet.net.

Each Wednesday, I join Ann Voskamp as we ponder the things that draw us near to His heart. This Wednesday, we explore: “How to Love Like Jesus.”

Yes, it’s only Monday. But I’ve been rolling around the question today, too.
And Claude? Well, he’s been showing me what it means to love like Jesus.