We woke up Earth this week from a winter slumber. 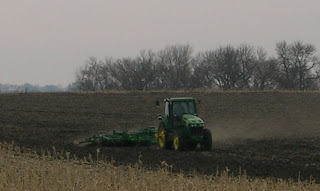 Scott combed through lazy Earth, 20 feet at a time, kicking up dusty clouds on soil farmed by four generations of Lee men. Grafted in by marriage, I woke up Earth, too — one small patch at a time with rake and wheelbarrow.

Scott in his field, I in my garden. Together we labored, in a season where hope springs eternal.

Yes, almost everything was here. Everything, except for Paul.

It’s been almost three months since Paul went home. He died in January from leukemia. Before his diagnosis, we’d always imagined Paul would live long, farming alongside his son (my husband) who’d come home to help on the farm.

Living long. … That’s how Lee blood runs. Paul’s father died at age 95, farming alongside his own son up until a few years ago. Paul’s mother, 95, is still living. Paul was only 67 when he went home.

For a time, it was three Lee men on the farm — Milo, Paul and Scott.

Five years later, only one Lee man is left. I watched the lone farmer Saturday morning, brushing strokes — east, then west, then east again — across an earthen canvas.

At age 37, for the first time, he’s the patriarch on the farm. My heart swelled.

Alone, he was. But not really, you know …

“God’s in charge,” Scott told me just minutes ago when I asked him about the weather and his farming plans for this coming week. “God will provide. If I learned anything from my Dad, it’s that you can’t control it, so don’t worry about it. God’s in charge.”

No, Scott is not alone.

Before he died, Paul told his son that he felt closest to God on the seat of a John Deere tractor, tending to God’s Earth.

I felt it, too, like I was brushing up against Heaven, as I did my own tending with a rake.

With the grit of dirt between my teeth and the smell of loamy earth filling crisp spring air around me, I gardened with God. Together, we woke up Earth in my garden, raking away the old to make room for new. 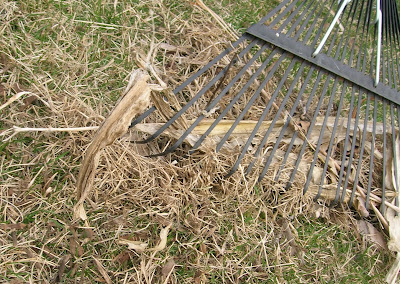 And then this: dried corn leaves.

Those leaves were the last remnant of Paul’s crop. Dead ol’ corn leaves stuck in the thorns of a rose bush. I had to get down on my knees and pull them out by hand, for the stubborn thorns wouldn’t let go.

A year ago, I watched as Paul planted that crop, and now, here I was clutching what was left of it. I tossed it all in the wheelbarrow, teary, as I knew the leftovers would be headed for my garden graveyard, where all of the garden’s dead things go.

Was that OK to do? Should I save it? I wondered.

But in removing the old, I made room for new.

Maybe this is how Paul felt each spring, when hope was most clearly seen from the seat of a tractor.

He was making room
for new things,
new growth,
the hope that springs eternal.

And to think I thought I was waking up Earth. Seems Earth was waking me up, too.

***
Deep gratitude to Ann Voskamp at A Holy Experience for her encouragement in writing this post. Though separated by distance, we’re connected by God and by Earth. She blesses.